China's Wild West has something to yak about

china
#1 Jan 27th, 2009
China's Wild West has something to yak about
By Chen Liang (China Daily)
Updated: 2009-01-21 10:19
While talking about "niu", images of domesticated bulls, cows, buffaloes or even yaks might cross our mind. But few of us will think about "ye niu", or wild cattle, as they all live in remote areas, scarce even in their own habitats and endangered around the country. 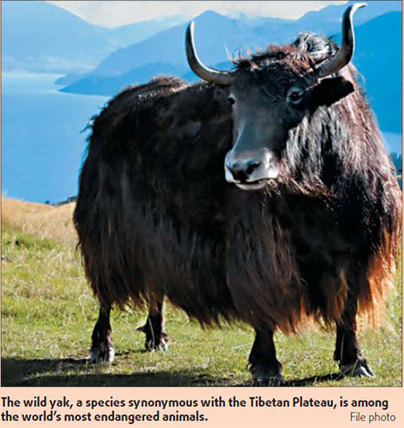 So how many different species of wild cattle are there in China and how are they doing?
There are three species of wild animals with "niu" in their Chinese names: ye niu (gaur), ye maoniu (wild yak) and ling niu (takin). Of them, only gaur and wild yak, are truly wild cattle. The takin, a large, sturdy animal that looks rather like a musk ox, is actually an antelope.
Once found in central China, extending to the Indian subcontinent through Myanmar and Indochina to the Malay Peninsular, the gaur is the rarest one of the three in China and can only be seen in the southernmost part of Southwest China's Yunnan province.
Where gaurs have not been disturbed, they are basically diurnal, being most active in the morning and late afternoon and resting during the hottest time of the day. However, where they have been disturbed by humans, gaurs have become largely nocturnal, rarely seen in the open after 8 am.
During the dry season, herds congregate and remain in small areas, dispersing into the hills with the arrival of the monsoon. While gaurs depend on water for drinking, they do not seem to bathe or wallow. Moreover, when alarmed, they charge off into the jungle with surprising speed.
Wild yaks are the ancestors of domestic yaks and much larger. Males can weigh up to 1,000 kg and measure 1.8 m at the shoulder. Wild yaks are mostly black or dark brown, with the exception of the fabled golden wild yak.
The last of the wild yaks live in the remote alpine tundra and ice desert regions of the Tibetan Plateau, mostly in the Chang Tang National Nature Reserve. Here the altitude is 4,000-6,000 m, and the temperature can fall below -20C. Annual rainfall amounts from 100-300 mm, falling mostly as hail or snow, and leaving little surface water. Grasses and low shrubs make up the vegetation.
There are few wild yaks living in India and Nepal.
In 1995 there were about 15,000 wild yaks in existence, according to renowned zoologist, George Schaller from the Wildlife Conservation Society (WCS). Today there are less than 10,000 in the world.
The threats to the flagship species on Tibetan Plateau are habitat destruction, interbreeding with domestic yaks and low fertility.
The takin is a goat-antelope found in the Eastern Himalayas. They are covered in a thick golden wool which turns black on the under-belly. Both sexes have small horns that run horizontally above the skull and then point upwards.
Takins are found in bamboo forests at altitudes of 2,000 m to 4,000 m, where they eat grass, buds and leaves. The animals are diurnal, active in the day but resting in the heat on particularly sunny days. Takins gather in small herds in winter and in herds of up to 100 individuals in the summer. Old males tend to lead solitary lives.
Usually found in western China, the animals are relatively easy to find on the Qinling Mountains between Sichuan and Shaanxi provinces, because of State protection and no competitors in the wild.
But be careful: This heavy and hairy animal is truly the most dangerous monster in the wilds of China and more people are reported to have been hurt, or even killed, by it than by any other animal.

Re: China's Wild West has something to yak about

Jan 27th, 2009
If they are shorn what does the musculature look like? Are they thinish and stringy or solidly built?

Re: China's Wild West has something to yak about

If they are shorn what does the musculature look like? Are they thinish and stringy or solidly built?


I can't answer your questions, just don't have the answers; one thing I'm sure , a beaver weather dark or brown ,wouldn't stand a chance against this animal weather it be thinish and stringy or solidly built .