This is why I have CAA

When Hollo called the dealership the next day, he got a shock.

"They were asked [by the towing company] for $4287.50 plus tax, plus money for storage," he said. "They weren't willing to sign that because they figured the insurance company wasn't going to pay for it."

The towing company then towed the car away to a lot for storage until the bill was paid. 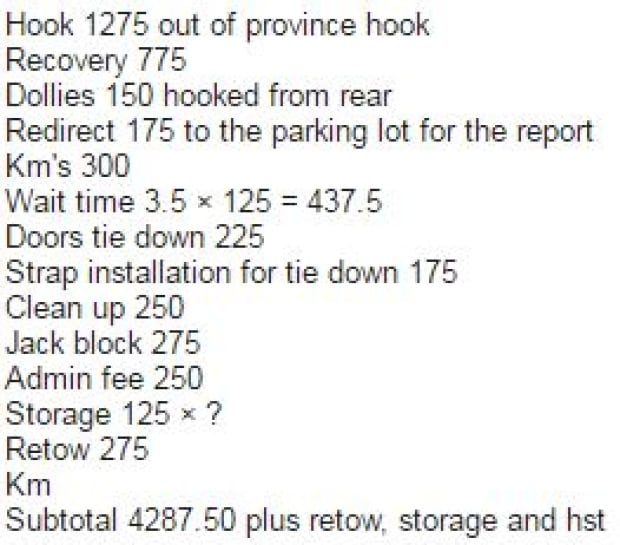 Lallier Honda Hull confirmed the car was being towed back to the dealership and the bill had been reduced to $1,594.

Lamoureux said the towing company cited a billing error, while Big City Towing said the issue had been sorted out with the insurance company earlier in the day.

The president of the Provincial Towing Association of Ontario said while it's common practice for towing companies to impound vehicles until bills are paid, he can't understand why Hollo's original bill was so high.

"It isn't unusual for that to have happened, but how it gets to [over] $4,000 boggles my mind," Joey Gagne said.
Gagne said a basic tow from a collision scene usually totals approximately $800, depending on the distance and other factors.

Under a new provincial law that came into effect Jan. 1, operators are supposed to show potential customers a rate sheet at the collision scene. Gagne said consumers should also get a written quote to avoid a nasty surprise later on.