Why use dental floss when you can use a nail file?

Blackleaf
#1 May 13th, 2006
Foreigners say the British have rotten teeth.

But is it any wonder, when SIXTY per cent of the British - instead of using dental floss - just use whatever is at hand......

The tooth about crazy flossing techniques
12th May 2006 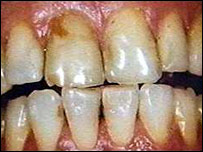 People are damaging their teeth by picking them with household items such as knives, scissors and even screwdrivers.

A National Dental Survey found over 60 per cent use whatever is close to hand when they have food stuck in their teeth.

"Clearly people really need to be educated on the importance of flossing," Dr Nigel Carter, chief executive of the British Dental Foundation said.

"Flossing is a vital part of a good oral health routine, removing food particles from between the teeth and plaque from against gumline.

"The best thing to dislodge food from between the teeth with is interdental wood sticks, as these are shaped specifically for this purpose. However, cocktail sticks are not and should be avoided.

He added: "A screwdriver is hardly the most flexible of items and I don't think people realise the damage this could do to their gums."

The survey was conducted in the run-up to National Smile Month (May 14 - June 13).