Haggis was invented by the English but hijacked by Scottish nationalists

Scotland and England may nowadays be unified as one nation as they have been for 300 years, but there are still reasons for the hapless Scots to feel an inferiority complex towards their much larger, and more successful, neighbour to the south.

A historian (who is Scottish) has claimed that haggis, Scotland's national dish eaten with great joy throughout Scotland on Burns Night, was actually invented by the English.

The historian, Catherine Brown, has discovered references to haggis in an English recipe book of 1615, which means it was a popular delicacy south of the border at least 171 years before Scottish poet Robert Burns penned his poem Address to a Haggis in 1786.

Brown believes that after England (already unified with Wales) and Scotland unified to form the larger nation of Great Britain in 1707, Scottish nationalists may have appropriated haggis as a symbol of Scottish nationhood.

Haggis has many varieties, but is usually sheep's guts (heart, liver and lungs) minced with onion, oatmeal, suet, spices, and salt, mixed with stock, and traditionally boiled in the animal's stomach for approximately three hours.

A frequent tale is that a "Haggis" is a small Scottish animal with one set of legs longer than the other so that it can stand on the steep Scottish Highlands without falling over. According to one poll, 33% of American visitors to Scotland believe haggis to be an animal.

Certain clues may back up Brown's claims. 'Haggis' is an uncommon surname and may come from an Old English word meaning 'a woodsman's hut', and a Lord Haggis rode on the third crusade with English king Richard the Lionheart.

We also already know that even the "Scottish" kilt was invented by the Englishman Thomas Rawlinson in 1727. Rawlinson was an industrialist who'd built an ironworks in Scotland, and felt that the lumbermen he'd hired were hindered in their work by the clothes they wore. So he invented the kilt (Rawlinson himself, wisely, probably wouldn't have been seen dead in it).


Haggis was invented by the English 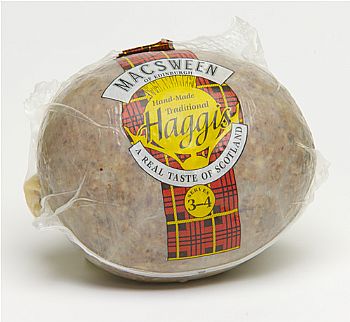 Haggis, Scotlands most iconic dish, was an English invention that was hijacked by Scottish nationalists, a leading food historian has claimed.

Catherine Brown has discovered references to haggis in an English recipe book dated 1615, which prove that the great chieftain o the puddin-race! was a popular delicacy south of the border at least 171 years before Robert Burns penned his poem Address to a Haggis.

According to the Scots author of Broths to Bannocks, a history of Scottish food, the earliest reference to the pudding is in The English Hus-wife (housewife), written by Gervase Markham.

Markhams book states: This small oatmeal mixed with the blood, and the liver, of either sheep, calfe, or swine, maketh that pudding which is called the Haggas, or Haggus, of whose goodnesse it is vain to boast, because there is hardly to be found a man that doth not affect (like) them.

Scottish poet Robert Burns wrote "Address To A Haggis" in 1786

Brown, who will discuss her findings in an STV documentary this week, said that the first mention she could find of Scottish haggis was in 1747 and that it is inevitable that the recipe was copied from English books.

It was originally an English dish. In 1615, Gervase Markham says that it is very popular among all people in England, she said.

Brown added: By the middle of the 18th century another English cookery writer, Hannah Glasse, has a recipe that she calls Scotch haggis, the haggis that we know today.

Proof that by the late 18th century haggis was no longer seen as an English dish is the mention by Tobias Smollett in his novel The Expedition of Humphry Clinker (1771), where the hero (an Englishman) says, I am not yet Scotchman enough to relish their singed sheeps head and haggis.

Brown believes that nationalists may have appropriated haggis as a symbol of Scottish nationhood in the 18th century after the country lost its own monarchy and parliament following the treaty of union.

It seems to be that theres an identity thing there. Wed lost our monarchy, wed lost our parliament and we gained our haggis, she said.

You had the whole thing going on with Sir Walter Scott, who was very pro-active in keeping the Scottish identity alive, with tartan and so on. There was a latching onto everything that was distinctive about Scotland, and Burns had identified the dish in such an evocative way.

Brown, who claims that the word haggis is also of English origin, believes Burns claimed the pudding as Scottish with his poem in 1786 because it was a thrifty counterbalance to the elaborate and pretentious French cuisine popular in Edinburgh at the time.

But Ian Scott, a member of the Saltire Society, said that he believed that haggis was a Scottish invention that had been introduced south of the border by a Scot.

I can just imagine a backpacker on his way down south maybe having a picnic and leaving a bit behind, and someone saying weve discovered something fantastically new, he said.

I love haggis and every January I eat it about 11 times. These claims wont make me feel any different. Id tuck into it with even greater gusto if I thought that it had been invented by the English. I mean, they are bound to have invented something worthwhile.

James Macsween, director of Macsweens, the award-winning Edinburgh haggis-maker, said that whatever its origin, the pudding would remain a Scottish icon.

This is certainly a revelation to me, but haggis is now renowned as Scotlands dish largely due to Robert Burns, who made it famous.

Thats not to say that prior to Burns that haggis wasnt eaten in England, but Scotland has done a better job of looking after it. I didnt hear [of] Shakespeare writing a poem about haggis.

Haggis, which is made from a mixture of oatmeal, liver, heart and lungs, is similar to many other offal-based pudding popular around the world, including Norwegian lungemos and Mexican montalayo. Other food writers have variously suggested that the dish was invented by the ancient Romans and the Vikings.


I love haggis and every January I eat it about 11 times. These claims wont make me feel any different. Id tuck into it with even greater gusto if I thought that it had been invented by the English. I mean, they are bound to have invented something worthwhile.

Ian Scott, a member of the Saltire Society

Did you hear about the bigot who hates all things English? He makes a good living in the Concreting business, because almost everything in the City depends on this industry. It's just a pity that reinforced concrete was invented by W.B. Wilkinson in Newcastle, England.

However, not all of his appliances run on electric motors. There's his Microwave Oven, based on the Magnetron invented by Sir John Randall and Dr H A H Boot at Birmingham University. His modern Central Heating unit, designed by Englishman A H Barker, and even his TV set, the brainchild of Englishman Shelford Bidwell. Even the television's production depended on the invention of the cathode-ray tube by London physicist Sir William Crookes.

All of these things reminded our bigot too much of England, so he turned on his radio for news from another country more to his liking. It didn't help much though, because he remembered that satellite radio transmitters are powered by fuel cells invented by the English chemist Francis T Bacon.

He thought of expressing his frustration by writing an angry letter. But it wouldn't go anywhere without the postal system, created in London by Sir Rowland Hill. That is, unless he chose to send his letter by e-mail on a computer - the brainchild of Englishman Sir Charles Babbage.

Our bigot then briefly considered getting away from it all - flying off to some remote place with nothing to remind him of English genius. But then he recalled that modern jet aircraft engines were designed by English test pilot Sir Frank Whittle.

He then decided to do some home chores, so he thought about washing the dishes - but his kitchen sink is made of stainless steel, invented by Englishman Sir Harry Brearly. To make matters worse, he noticed that his favourite and most useful kitchen utensils were made of plastic, the brainchild of Birmingham professor Alexander Parkes.

So, desperate to avoid the brilliance of the English, he headed out doors - passing on the way his modern WC, designed by Londoner Alexander Cummings.

Once outside, he noticed that the lawn was a bit overgrown because he couldn't bring himself to use the lawn mower, originally designed by Edwin Budding of Gloucestershire.

Our bigot, now completely distracted by anger, turned around and walked straight into one of his prized rose bushes, badly scratching his arms and hands.

Briefly, he was glad that his Tetanus shots were up to date - until he remembered that immunisation was discovered by Dr Edward Jenner, another Gloucestershire man.

This was all too much - All of this contact with English brilliance just about gave the poor chap a heart attack. It's just as well that he had previously been fitted with a cardiac pacemaker, the invention of English surgeon W H Walshe.

Feeling very run-down, emotionally depressed and really quite ill, our bigot decided that he'd better go to the doctors for a check-up. After a breif consultation, the doctor announced that he needed an urgent blood transfusion to save his life. Fortunately, this was quickly arranged and our bigot survived - thanks mostly to James Blundell, who pioneered blood transfusions at Guy's Hospital, London.

Haggis was invented by the English

... made from a mixture of oatmeal, liver, heart and lungs...

Not something to be proud of, I'd say. Let the Scots have it.

Not something to be proud of, I'd say. Let the Scots have it.

There was a time in my life(back in the sixties) when it was sort of in, to eat escargot. For a month or two I actually convinced myself that they were good. I was walking up our driveway when I accidentally stepped on a slug. I knew that a slug was just a snail without a shell and that finished off escargot in our house. I'm afraid haggis is way down our list of things to eat any time soon, but it is probably ahead of snails.

Considering the liver and the kidneys are the filters that keep the yuckies out of our system, I can't see how anyone can eat those things. Tongue? eeewwww Cow spit. Oxtail? Too near the business end of the ox for me. They don't care if they move their tails aside in the process of doing business.
No haggis for me, either.


It has been forbidden to import the savoury pudding into the US since 1971 following an embargo on food containing sheep lung, which makes up part of the traditional recipe.


Why? Considering you've never had it you have no idea whatsoever what it's like, so you aren't able to properly comment on it.

For the record, it's absolutely delicious. I remember when we got served some for dinner on Burns Night on HMS Exeter when I was in the navy. I've had it many times since. Some people boil it in a pan of water. Some put it in the oven. I put mine in the oven.