With several England stars fined for getting drunk - including intoxicated vice-captain Flintoff sinking a pedalo off the coast of St Lucia - this has been an eventful start of the 2007 Cricket World Cup off the field as well as on it.

Now Pakistan's coach Bob Woolmer, a former England player, has died suddenly after falling unconscious in his hotel room in Jamaica. Just yesterday Pakistan suffered one of the biggest shocks in World Cup history when they were beaten by minnows Ireland, a result which sent Pakistan, one of the favourites at the start of the tournament, OUT of the World Cup at the Group Stage.... 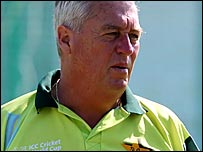 Woolmer took over as Pakistan coach in June 2004

Pakistan coach Bob Woolmer has died after being discovered in his Jamaica hotel room on Sunday morning.

The 58-year-old former South Africa coach, who played for England between 1975 and 1981, was found unconscious at the Pegasus Hotel at 1045 local time.

He was taken to the emergency ward of the nearby University hospital but did not regain consciousness.

"It is very shocking news to all of the team and the team management," said Pakistan team manager Pervez Mir.

Mir revealed that Woolmer suffered from a medical condition - but said it was too early to say whether it played a part in his death.

"We saw him last night but having not seen him early today two of our officers went to his room and with the help of hotel staff entered. He was found unconscious there."

Woolmer's South-Africa based wife has been notified. He also leaves two children.

"It is too early to say whether he has suffered a heart attack. We are awaiting medical reports."

Pakistan were eliminated from the World Cup on Saturday after losing by three wickets to minnows Ireland.

Their preparations for the tournament had been far from ideal.

Following the infamous forfeited Test against England at The Oval last summer, two of their leading fast bowlers Shoaib Akhtar and Mohammad Asif, were suspended after failing doping tests.

The pair later saw those bans rescinded but missed the World Cup because of injury, something Woolmer admitted had hindered the team.

"There are a number of extenuating circumstances in the last six months that have made coaching Pakistan slightly different to normal sides," he said after the defeat by Ireland.

The Pakistan team are scheduled to play their third match of the World Cup against Zimbabwe on Wednesday in Jamaica. The result is insignificant as Pakistan cannot now qualify out of their group.

Woolmer took charge of Pakistan for 10 Test series, four of which were won, with three lost and three drawn.

His overall Test record in 28 matches as Pakistan coach was 10 wins, 11 defeats and seven draws. In the one-day game, he took charge of 69 Pakistan internationals, winning 37, and losing 29, with three non-results.