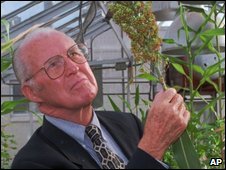 
Norman Borlaug, the man known as the father of the Green Revolution in agriculture, has died in the US state of Texas aged 95. Prof Borlaug won the Nobel Peace Prize in 1970 for agricultural innovation and the development of high-yield crops.
The Green Revolution helped world food production more than double between 1960 and 1990 with Asia, Africa and Latin America in particular benefiting.
The Nobel Institute said he had helped save hundreds of millions of lives.
Prof Borlaug died late on Saturday evening at his home in Dallas from complications with cancer, said a spokesperson for Texas A&M University, where he had worked.
'A better place'
In the early 1960s Prof Borlaug realised that creating short-stemmed varieties would leave food plants more energy for growing larger heads of grain.
His high-yield, disease-resistant dwarf wheat quickly boosted harvests in Latin America, and his techniques were particularly successful in South Asia, where famine was widespread.
Analysts believe the Green Revolution helped avert a worldwide famine in the late 20th century.
A close friend of Prof Borlaug at Texas A&M, Dr Ed Runge, told Associated Press news agency: "He has probably done more and is known by fewer people than anybody that has done that much... He made the world a better place."
The Nobel prize presentation said Prof Borlaug "more than any other single person of his age... has helped to provide bread for a hungry world".
Prof Borlaug continued his work into his 90s.
At a conference in the Philippines in 2006 he said: "We still have a large number of miserable, hungry people and this contributes to world instability.
"Human misery is explosive, and you better not forget that."
Norman Borlaug was born in Iowa in 1914.
He studied at the University of Minnesota and later worked for DuPont and the Rockefeller Foundation.
He set up his wheat and maize centre in 1963 to train scientists.
Prof Borlaug was awarded the highest US civilian award, the Congressional Gold Medal, in 2007.

Sep 13th, 2009
Twentieth Century agriculture was notable for huge advances in production. It was R.A. Fisher who pioneered the design of experiments, specifically with huge contributions to factorial design, and analysis of variance (ANOVA). The F-test and it's complex distribution are named in honour of Fisher's work.

Many scientists now use Fisher's work, though in Agriculture you would be hard pressed to find a scientist with seminal contributions any larger than Borlaug's. Were it not for his work on high yield cultivars of globally important crops, it's very likely that 1 billion or so people would have starved. Death, disease, conflict, would seem in retrospect to have been inevitable. India and Pakistan for example saw larger than quadruple gains in grain yields. With rampant hunger, it's scary to think what could have happened between these neighbours with such bad blood in their history.

Sep 13th, 2009
Sad. I hope his work is kept up, though, and not by big agricorps and pharmacorps so much.Power corrupts and absolute power corrupts absolutely.

Sep 13th, 2009
Fwiw ,guys, I see reports that they've come up with a short stem variety of rice.....
( I will see if I can find a link)
not as new as I thought but here: http://www.foodnavigator.com/Science...hort-rice-gene