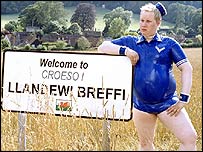 "I'm the only gay in the village!"


THE hit comedy Little Britain is to be remade as an all-American show by the cutting-edge US broadcaster HBO.

Matt Lucas and David Walliams are to adapt their outrageous comic creations for American viewers under a deal with the cable channel behind the award-winning The Sopranos and Sex and the City.

The search is on to find the urban American equivalent of the schoolgirl nightmare Vicky Pollard and a suitable deep South locale for the only gay in the village. The duo will work with American writers and Simon Fuller, the British entrepreneur behind Pop Idol, will oversee the show.

The sketches could not be remade on network American television because federal broadcasting rules result in $500,000 (£265,000) fines for material considered indecent.

But Lucas and Walliams could attract up to ten million viewers for an adapted version of a show that the US Entertainment Weekly called joyously off-kilter, manufactured for maximum offensiveness.

Lucas and Walliams have benefited from Americas current love affair with British television talent. Simon Cowell, the American Idol judge, is the countrys highest-earning entertainment star, and even Piers Morgan, former Editor of the Daily Mirror, is now a hit talent show judge.

British comedy, which has so often failed to cross the Atlantic, is finding a niche audience. The prime-time NBC remake of The Office has won an extended run by swapping Slough for Scranton, Pennsylvania.

Darren Star, the creator of Sex and the City, has been signed up to write and produce an American version of Julia Daviss dark BBC sitcom, Nighty Night. HBO already works with the BBC as a co-producer on Gervaiss follow-up show, Extras.

The Little Britain model will be Sacha Baron-Cohen, who reinvented his Ali G character as a hit with American viewers through HBO.

We are on the brink of confirming something rather special, Fuller told Broadcast magazine. Think back to Monty Python. Who would have thought that would have been such a big hit in America?

Lucas and Walliams will be free to work on the American version after concluding Little Britain with a BBC Christmas special. The British shows are shown in 13 countries and have already won a cult audience on the BBC America cable channel. Spin-off opportunities from a hit US version will be considerable. The pair will have earned an estimated £20 million over four years after the conclusion of a 140-date nationwide tour for which 200,000 tickets were sold in one day.

There will be a live DVD, for which they received a £2 million advance, to add to the BBC DVD releases that have sold 5 million copies. Talking Pollard dolls and other merchandise are expected to be strong sellers again this Christmas. Episodes will soon be on sale as paid-for downloads.

Lucas and Walliams will create a new comedy sketch show for BBC One next year, featuring some Little Britain favourites.


The American version will not be funny as the British one.