Arsenic-loving bacteria may help in hunt for alien life 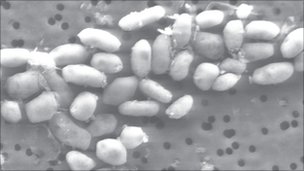 The first organism able to substitute one of the six chemical elements crucial to life has been found.

The bacterium, found in a California lake, uses the usually poisonous element arsenic in place of phosphorus.

The find, described in Science, gives weight to the long-standing idea that life on other planets may have a radically different chemical makeup.

It also has implications for the way life arose on Earth - and how many times it may have done so.

The "extremophile" bacteria were found in a briny lake in eastern California in the US.

While bacteria have been found in inhospitable environments and can consume what other life finds poisonous, this bacterial strain has actually taken arsenic on board in its cellular machinery.

Until now, the idea has been that life on Earth must be composed of at least the six elements carbon, hydrogen, oxygen, nitrogen, sulphur and phosphorus - no example had ever been found that violates this golden rule of biochemistry.

The bacteria were found as part of a hunt for life forms radically different from those we know.

"At the moment we have no idea if life is just a freak, bizarre accident which is confined to Earth or whether it is a natural part of a fundamentally biofriendly universe in which life pops up wherever there are Eath-like conditions," explained Paul Davies, the Arizona State University and Nasa Astrobiology Institute researcher who co-authored the research.

"Although it is fashionable to support the latter view, we have zero evidence in favour of it," he told BBC News.

Well there you go.... some food for thought for those interested.