I guess it's an acronym for John Ellis Bush.

Actually Granny might be a better choice - she didn't take any crap!

Actually Granny might be a better choice - she didn't take any crap!

yeah she's dayd too tho

No more bathing in the Seeee Ment pond!

Jan 30th, 2016
The mystery of which member of the Bush family is the smart one will not be solved today. But it definitely is not George P. Bush, son of Jeb!, who, when asked to assess the state of his fathers presidential campaign, said:

"I know it may sound contrarian, but this is the position that he wants to be in."

Lets recap: After blowing through tens of millions of dollars, Jeb! is currently in the position of praying that he can edge out Ben Carson for fourth place in the Iowa Caucus, he has a net favorable rating of -1 among Republicans, along with the fact that the only real interest the media or voters have in his campaign is on when hell drop out.

It seems that Jeb Bush, now reduced to an asterisk (*) in the 2016 Republican Presidential contest, has concluded that the best way to quickly burn through those millions upon millions of dollars in campaign donations he received is to perform a supreme act of self-immolation , by resurrecting the infamous Terry Schiavo fiasco in a new campaign ad , paid for, morbidly enough, by a Bush PAC that calls itself Right To Rise."

In addition to touting his high score with the NRA , the voice-over in Bushs new ad celebrates how then-Florida governor Bush fought time and again for the right to life," with an image of someone leaning over Schiavo, lying in a helpless vegetative state in her hospital bed.

And while the general electorate will likely recoil in horror at this kind of crass opportunism, Bush apparently hopes the Republican base will be shocked and awed as they are reminded of his role in forcing the irreversibly and profoundly brain-damaged Schiavo to cling to life in direct contravention of what her husband explained would have been her own desires, simply to bolster his credentials among the forced-birth crowd of ghouls who demanded that the poor woman be kept resuscitated at all costs, no matter how much pain it caused to others.

The Schiavo episode served as a teachable moment for the rest of the country to see just how extreme the Republican Party could be in attempting to impose and enforce its twisted sense of values upon the rest of us. All pretense of keeping government" out of the peoples lives went straight out the window. By raising the specter of venal politicians exercising wanton control over other peoples personal life and death decisions, the GOP showed its true colors as it never had before:

For anyone who may have forgotten, Bush, enabled by a Republican-dominated Florida state legislature which had passed something called Terri's Law," spearheaded the effort to maintain Schiavos feeding tubes in the face of multiple Court rulings (including one by a Florida Judge which held that law summarily deprived Florida residents of their right of privacy.) That law, and Jeb Bush's actions, were ultimately repudiated by a unanimous Florida Supreme Court.

This was a textbook example of right-wing overreach. One would have thought that Jeb Bush would have learned his lesson and avoided this episode like the plague. But now hes faced with angry billionaire donors sending him furious ultimatums about how little return theyve got for their money. It's Hail Mary time for Jeb Bush, and apparently anything goes.

It is simply disgusting that Jeb Bush and his super PAC would exploit my wifes tragedy for his crude political gain, Mike Schiavo said in a statement about the ad published by Politico . Shame on Jeb Bush.

Using his disgraceful intervention in our familys private trauma to advance his political career shows that he has learned nothing. Hes proud of the fact that he used the machinery of government to keep a person alive through extraordinary artificial means  contrary to the orders of the court that were based on the courts determination, made over six years of litigation, that doing so would be against her wishes, he added. What the campaign video shows is that if he ever got his hands on the power of government again, he would do the same thing again, maybe next time to your family.

Feb 7th, 2016
Jeb is only still in the race because the Bush family strongly believes in no child left behind Feb 7th, 2016
Jeb Bush talked about trade with China and showed how much he relies on briefings by his team to create his talking points. Bush did not realize Boeing was moving a manufacturing plant to China, and with it American Jobs

Donald Trump, responding to Jebs Boeing example, pointed out China is forcing Boeing to open a manufacturing plant in China. As typical from a candidate who is unfamiliar and unbriefed on the issue Jeb looked back incredulously and said; Cmon man

There, in that exact moment, is the spotlight upon all that is wrong with a professional political class; globalists dependent on Wall Street for their talking points.

But the issue is bigger.

Not only is China demanding Boeing open a plant in China, the intent of such a plant provides an opportunity to explain why Trump is vitally important  and time is wasting.

China is refusing to trade with Boeing if the company does not move. Why? Its not about putting Chinese people to work, its about China importing their research and development, Boeings production secrets, into their country so they can learn, steal and begin to manufacture their own airliners.

This is just how China works. In time, Comac, a state-owned, Shanghai-based aerospace company will then use the production secrets they have stolen, produce their own airliners, kick out Boeing, undercut the market, and sell cheaper manufactured airplanes to the global economy.

Boeing, the great American company that Jeb Bush thinks they are, becomes yet another notch on the Asian market belt.

All of those Boeing workers, those high-wage industrial skill jobs that support the American middle class, yeah  those jobs lost. And the cycle continues.

Of course Wall Street will be invested in the cheaper Chinese aerospace manufacturing company Comac, as it emerges as a manufacturing power.

Similarly, last night in New Hampshire, to bolster his propositions about eminent domain, Governor Jeb Bush made the gobsmacking assertion the Keystone Pipeline project was a public use project.

The Keystone pipeline is entirely a private corporation, a private energy firm, seeking federal permission to build a North American pipeline. There is nothing about the Keystone Pipeline that is a public use project, it is a private use project.

The U.S. government has no ownership stake in the project whatsoever.

While the project was originally developed as a partnership between TransCanada Corporation and ConocoPhillips; TransCanada is now the sole owner of the Keystone Pipeline System, as TransCanada received regulatory approval on August 12, 2009 to purchase ConocoPhillips interest. Neither of these entities are related to the government of Canada or the United States.

Trump noted Bushs low polling throughout the contest, which placed him at the edge of the stage at Republican debates.

I was center stage at every debate, Trump said.

I dont think hes going to endorse me, do you folks? Trump asked the crowd, before dismissively adding: Who the hell cares?

Bush has said he will not vote for Trump in November.

Trump on Jeb endorsement: 'Who the hell cares?' | TheHill 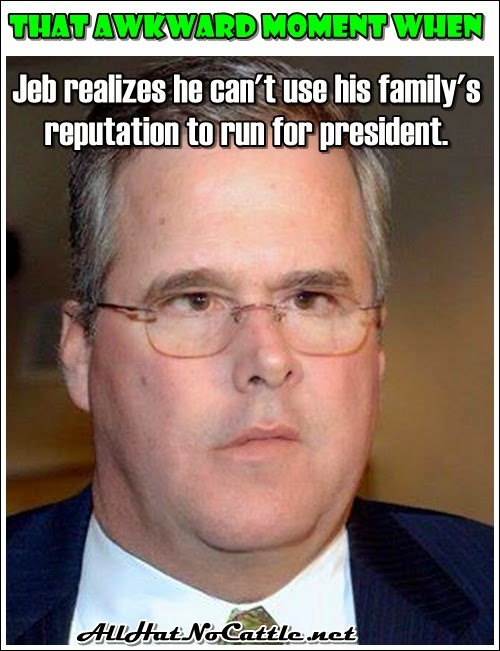 Trump on Saturday accused Jeb Bush of mounting a convention coup against him, after reports that Republican delegates who don't personally support Trump are looking for ways to avoid voting for him this summer.

Jun 18th, 2016
These F**kers are worse than a bunch of kindergarten brats!

These F**kers are worse than a bunch of kindergarten brats!

They are fighting for their gravy train , what do you expect .

Can you say President Jeb Bush ?? Get used to it folks..

That was before Ted Cruz , now its Hillary .
Once a loser always a loser .

That was before Ted Cruz , now its Hillary .
Once a loser always a loser .

If memory serves, it went Bush, Cruz, Hillary. He actually praised Trump for a short time.

Then Flossy made him his puppy.

If memory serves, it went Bush, Cruz, Hillary. He actually praised Trump for a short time.

Then Flossy made him his puppy.

Hypocrites, malicious ... how can you speak with goodness while you are evil? --- [Jesus Christ said it]

Hypocrites, malicious ... how can you speak with goodness while you are evil? --- [Jesus Christ said it]