bill barilko
#1 Nov 4th, 2011
I'm sure everyone here will join me in Congratulating the Colombian Govt and their victorious military! 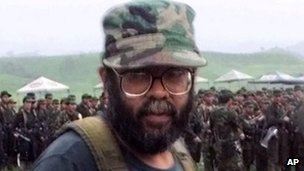 Alfonso Cano had a $4m prize tag on his head

Defence ministry sources told media that Alfonso Cano had been killed in an army operation in the mountains in the south-west of the country.

Colombia had offered a reward of nearly $4m (£2.5m) for information leading to his capture.

Security forces have killed a number of Farc commanders and arrested many others over the past year.

'Fingerprints matched'
Details of the military operation in Cauca state are still sketchy, with some reports suggesting that Mr Cano was killed in a bombing raid.

Mr Cano, 63, was reportedly tracked down in a jungle camp with the aid of telephone intercepts.

"The fingerprints matched," one senior security official was later quoted as saying after the operation by the Associated Press news agency.

State Governor Gonzalez Mosquera later told local radio that the military had "achieved one of its most important goals".

Mr Cano, a former academic from Bogota, became the Farc's leader in 2008 after his predecessor, Manuel Marulanda died of a heart attack.

In July, he narrowly escaped a raid on his camp, Colombia officials said.

The Marxist-inspired Farc (Revolutionary Armed Forces of Colombia) has been weakened by a military offensive which began 10 years ago.

In March 2008, top Farc figure Raul Reyes was killed during an aerial bombardment by Colombian troops.


In September 2010, Mono Jojoy, another top Farc commander, was killed in a bombing raid.

The Colombian army also said earlier this year that it had killed Mr Cano's head of security, Alirio Rojas Bocanegra.

The military has been able to expand its operations against the rebels with the help of the US, who provided billions of dollars in funding, training and intelligence-sharing.

However, the Farc - the oldest and largest among Colombia's left-wing rebel groups - retains the ability to mount hit-and-run attacks, partly owing to cash raised through its involvement in the illegal drugs trade and partly thanks to the country's thick jungles.

The Farc is on US and European lists of terrorist organisations.