London's earliest playhouse may have been discovered at a housing redevelopment in Whitechapel, archaeologists have said.

The Red Lion was thought to be the first purpose-built theatre of the Elizabethan era but its location has long been disputed... 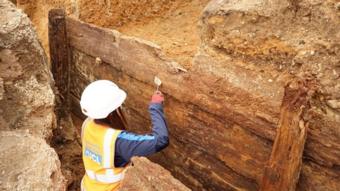 London's earliest playhouse may have been discovered at a housing redevelopment in Whitechapel, archaeologists have said.

The Red Lion was thought to be the first purpose-built theatre of the Elizabethan era but its location has long been disputed.

Archaeologist Stephen White described it as an "extraordinary" discovery. 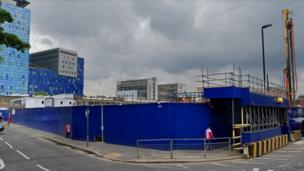 The Red Lion is thought to have been built in about 1567 by John Brayne, ahead of his construction of The Theatre in Shoreditch, which he completed with James Burbage in 1576.

Burbage was a member of acting company The Lord Chamberlain's Men and The Theatre was the first permanent home for acting troupes, staging a young William Shakespeare's plays in the 1590s. 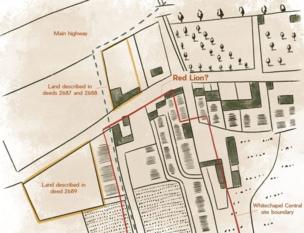 Little is known about the Red Lion, with contemporary details limited to two lawsuits in 1567 and 1569 that mentioned "the red lyon" and "a farme house", which had an outdoor stage and seating.

In January 2019, archaeologists began to uncover a rectangular timber structure made up of 144 surviving timbers, with postholes around it, which could have been "scaffolds" or galleried seating.

The site measures 12.3m (40ft) by 9.3m (31ft) and closely matches the dimensions mentioned in the lawsuits, experts said.

The excavations were carried out by Archaeology South-East, part of UCL's Institute of Archaeology, before building work began at 85 Stepney Way. 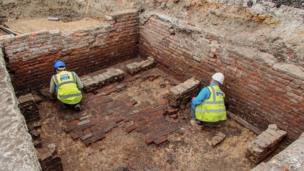 Mr White, who directed the work, said: "After nearly 500 years, the remains of the Red Lion playhouse, which marked the dawn of Elizabethan theatre, may have finally been found.

"The strength of the combined evidence - archaeological remains of buildings, in the right location, of the right period - seem to match up with characteristics of the playhouse recorded in early documents."

Buildings from the 15th and 16th Century that were further developed over the next 100 years were also found in the north-east corner of the site.

Experts said they believed these could have been part of the Red Lion Inn, which is thought to have been developed from a farmstead on the site.

Two beer cellars, beakers, bottles and tankards were discovered among the remains. 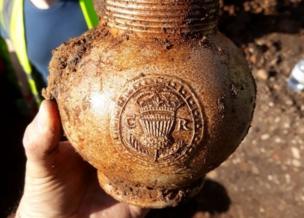 The Theatre and The Curtain playhouses were discovered during the past decade during excavations in Shoreditch, while the Boar's Head has been found in Aldgate.

She added the group would "continue to work closely with the developer to interpret these archaeological remains and display them".