Blackleaf
#1 Oct 28th, 2007
For those who don't know, there are two types of rugby - Rugby Union and Rugby League, each with slightly different rules and scoring systems. England have just reached the Final of the Rugby Union World Cup, losing in it to South Africa. Now, in Rugby League, the Great Britain team (unlike Rugby Union most matches in Rugby League involve the whole of Britain rather than just England, Scotland, Wales and the whole of the island of Ireland as it is in Rugby Union) are playing New Zealand in a best-of-three Series, and Britain have gone 1-0 up.

Lion cub Burgess gets GB off to a flyer

Sam Burgess thought it was probably asking too much for him to score a try on his Great Britain debut and emulate his hero Andy Farrell. It wasn't, and not only that, his touchdown sealed a vital win.

Just as Farrell, the last 18-year-old to play for the Lions all of 14 years ago before going on to become an icon in rugby league, scored against the Kiwis on his debut in a victory, so did Bradford's giant prop. 
'Big Sam', Super League's Young Player of the Year, had already dedicated his debut to his late father Mark, who died six months ago from motor neurone disease. How Mark Burgess would have loved to see Sam help give new coach Tony Smith his first victory since taking the Great Britain job fulltime a fortnight ago.

More to the point, his 62nd-minute touchdown effectively sealed a home win for the Lions in the first Gillette Fusion Test. Now they need to win either at Hull next Saturday or Wigan a week later to give the Lions their first outright win in a Test series since 1993 — when Farrell made his international bow.

But Burgess, who has 15-year-old twin brothers and another Luke, 20, who also plays professionally, was both hero and villain last night. There is a chance he will miss the next Test after being put 'on report' by Australian referee Tony Archer for a high tackle which floored Kiwi prop Fuifui Moimoi three minutes before the Bradford man's crucial touchdown.

At the very least, Burgess is likely to face a visit to the international judiciary tomorrow when the panel will come under intense pressure from the Kiwis, still outraged that Warrington's Adrian Morley escaped punishment a week ago for a dubious tackle in the Northern Union-New Zealand All Golds game.

That will have to wait. For the moment the Lions can celebrate a win which gives them a very real chance of going to next year's World Cup with a rare trophy under their arm.

Not that it was easy, or that Burgess was the only star of a very competent Great Britain performance that turned a half-time deficit into a six-point victory.

Maurie Fa'asavalu, the other GB debutant, also came up with a vital score to win over a few friends from the school of thought that believe a former Samoan rugby union World Cup star should not be allowed to play for the Lions.

Fa'asavalu's controversial inclusion — he qualifies on residential grounds after playing all his rugby league here — has delivered an impact player of massive influence.

Kevin Sinfield, the Leeds captain, had to withdraw after being taken ill overnight. So Smith, who resurrected Sinfield's international career in the midseason Test against France, lost his loose forward and first-choice goal-kicker.

Wigan's Sean O'Loughlin stepped up from the bench to wear the No 13 jersey with Jon Wilkin taking his place among the substitutes — an all-St Helens quartet. Tiny Leeds scrum-half Rob Burrow took over the goal-kicking duties and deservedly won the man-ofthematch vote last night, repeating his Harry Sunderland Trophy triumph at Old Trafford. He also forged a superb half-back combination with St Helens thoroughbred Leon Pryce.

The Kiwis, smarting from a 58-0 drubbing by Australia in Wellington, were also forced into changes by retirements, injuries and suspensions, but came up with a third-minute try that had 'made in Super League' stamped on it.

Wigan's Thomas Leulaui kicked through for Bradford's Shontayne Hape to pounce for the touchdown — the first of two. His second came just too late to make any difference.

The arrival from the home bench of Fa'asavalu and this year's Man of Steel James Roby roused the home crowd and between them they fashioned Great Britain's first try.

There should have been others before the break but opportunities were squandered and the Lions tossed away their hard-won lead when Fa'asavalu failed to gather a loose ball and the Kiwis hacked it on for centre Paul Whatuira to score. Hohaia converted and New Zealand led 10-8 at the interval.

The Kiwis lost winger Tame Tupou and debutant Epalahame Lauaki through injury as Great Britain put the hammer down although it took a blunder by fullback Sam Perrett, guilty of ball-watching behind his own posts, that virtually gifted Hull's Gareth Raynor a try.

Then Burgess came up with his, Burrow kicked superbly, and Hape's second try made no difference. One down, two to play for the Lions and, hopefully, Burgess will be there to enjoy it. 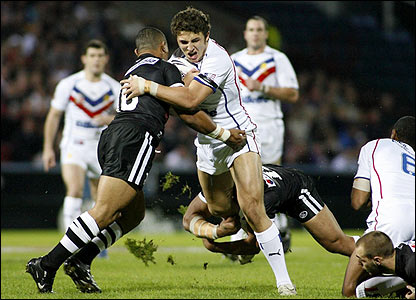 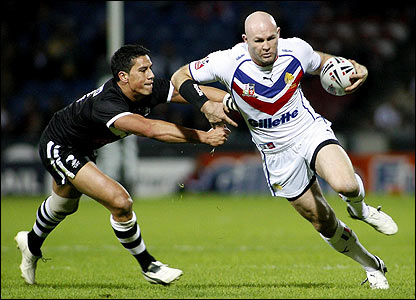 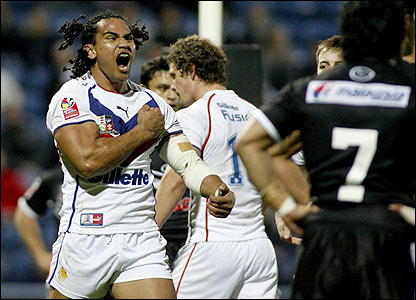 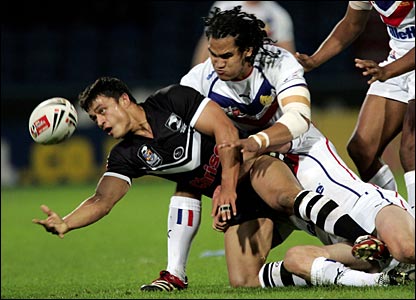 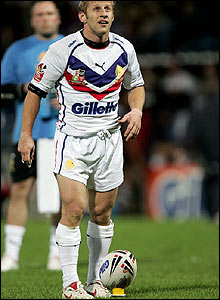 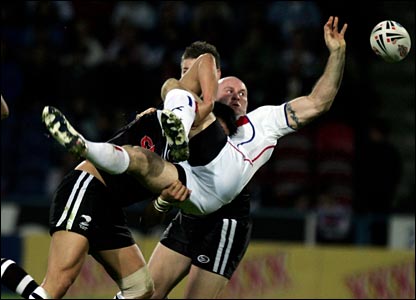 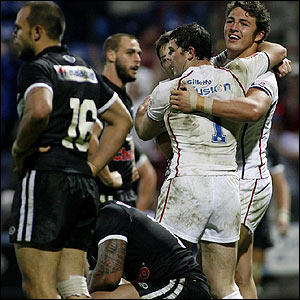 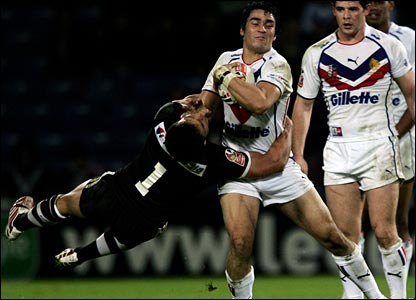 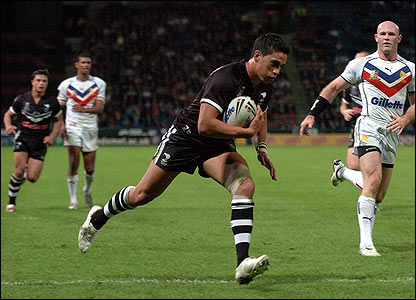