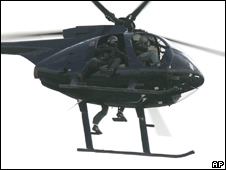 The US government spent $85bn (£45bn) between 2003 and 2007 on contractors for services in support of the Iraq war and reconstruction, a report says.

And by the end of 2008, spending is likely to top $100bn, a review by the Congressional Budget Office found.

Supporters say their use is cost-effective but there have also been documented cases of overcharging.

The US is relying on contractors in Iraq at a greater rate than in any other major conflict, the CBO said.

According to CBO estimates, the US currently employs 190,000 contractors in Iraq and neighbouring countries, a ratio of one contractor per member of the US armed forces.

About 20% are American, 40% are citizens from the country where they are employed; and the rest are foreign workers.

The majority of the $85bn was spent on contracts within Iraq, with the remainder being awarded for contracts in countries including Kuwait, Bahrain, Qatar and Saudi Arabia.

The use of security contractors has been the focus of particular attention, especially after an incident in September 2007 involving employees of the Blackwater firm which resulted in the deaths of 17 Iraqis.

The US justice department is due to decide soon whether to bring charges, the Associated Press reports.

The company, which said at the time that its staff acted in self-defence, is not expected to be prosecuted.

Last December, the US government said it had tightened procedures to give US military commanders a greater role in co-ordinating the movements of private security staff.

But the CBO notes that the legal status of contractor staff, particularly for those who are armed, remains uncertain.

The scale of the private contract business and the sums involved have prompted calls for greater scrutiny.

"I believe we need to create a special committee in the US Senate to exercise oversight over contracting abuses related to reconstruction and the wars in Iraq and Afghanistan," said Senator Byron Dorgan recently.

He wants a panel similar to one set up by Senator Harry Truman in 1941 during the build-up to WWII.
"The Truman Committee held 60 hearings on waste, fraud and abuse," Mr Dorgan said. "It's unfathomable to me that we don't have a bipartisan investigative committee on contracting in Iraq."

Not to mention our last Canadian Soldier killed was at the hands of a contractor.....