A hungry workman stunned fellow commuters by getting on the Tube balancing a full English breakfast and a cuppa.

The bloke, thought to be a builder, got on the Victoria line from Stockwell at around 7am on Tuesday where he proceeded to eat his tasty brekkie from the china plate...

A HUNGRY workman stunned fellow commuters by getting on the Tube balancing a full English breakfast and a cuppa.

The bloke, thought to be a builder, got on the Victoria line from Stockwell at around 7am on Tuesday where he proceeded to eat his tasty brekkie from the china plate. 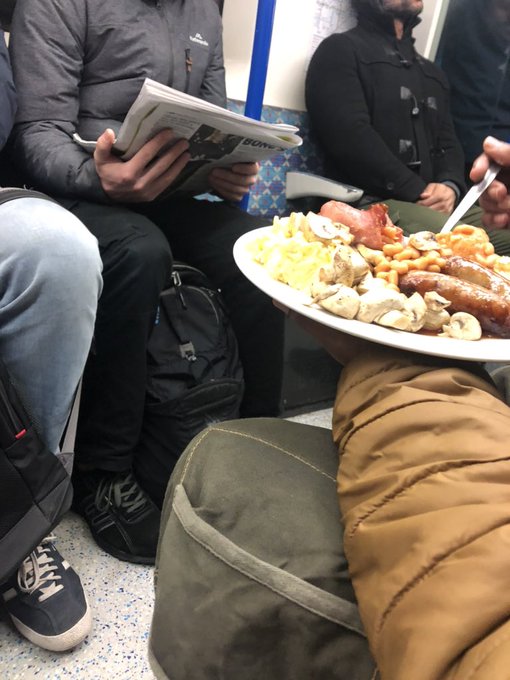 The workman ate a full English breakfast on the London tube

Other travellers looked on jeaolously as he scoffed beans, sausages, mushrooms, bacon and scrambled eggs for the three minute journey before getting off at Pimlico.

Not worrying about offending anyone on the crowded train, the brave brickie even slurped from a china white mug of tea as he balanced the plate on one hand.

One commuter, 32, took a snap of the breakfast bandit, telling The Sun: The guy, who was probably a builder, got on at Stockwell with his plate and a China mug of tea.

My eyes bulged and I caught the eye of the guy opposite me and we started laughing. It was a huge shock.

He had a full-on Full English - bacon, scrambled eggs, two sausages, beans, mushrooms and ketchup - and was properly tucking in with a fork.

He kept putting his tea on the floor and picking it up to take a slurp occasionally.

"The guy sat next to me was messaging his girlfriend about it.

Usually at that time in the morning its all workmen and bankers.

"He did so well to balance it - I had visions of it going all over me!

"There were a couple of points when the tube budged and I thought itd go everywhere. It had everything on there as well.

I think hed got it from a cafe and didnt have time to finish it so he took it on the tube.

The guy I was laughing with was in a suit. It looked like he was a bit jealous.

"Thought he was going to ask for a sausage! He was texting his partner to tell them what was happening.

I was slightly offended by the eggy smell but mainly admired his guts and appetite. I managed to get a covert shot of him eating.

Im pretty sure the mug was a typical builders mug. It looked like it may have a crown on it, like one of those keep calm and carry on designs.

Thats exactly what he was doing!

Last October suave Elvin Mensah pulled a prank on Londoners by setting up a romantic dinner date on the London Overground.

He pulled out a vase with a rose in it and even whipped out a silver service platter  pulling out all the stops.

The man managed to balance the plate while also drinking a cup of tea Credit: Getty - Contributor