spaminator
#1 Sep 6th, 2019
LOCH NESS MYSTERY: Scientists say Nessie might just be a giant eel
Reuters
Published:
September 5, 2019
Updated:
September 5, 2019 9:29 AM EDT
In this file photo taken on June 11, 2018 Professor Neil Gemmell takes samples on his boat as he conducts research into the DNA present in the waters of Loch Ness in the Scottish Highlands, Scotland on June 11, 2018.ANDY BUCHANAN / AFP/Getty Images
LONDON  Scotlands fabled Loch Ness monster could possibly be a giant eel, scientists said on Thursday after an intensive analysis of traces of DNA in the Lochs icy waters.
The results ruled out the presence of large animals such as dinosaurs, they said.
But there was a lot of eel DNA in the Loch, Professor Neil Gemmell, a geneticist from New Zealands University of Otago, told reporters.
Eels are very plentiful in the loch system  every single sampling site that we went to pretty much had eels and the sheer volume of it was a bit of a surprise, Gemmell said.
We cant exclude the possibility that theres a giant eel in Loch Ness but we dont know whether these samples weve collected are from a giant beast or just an ordinary one  so theres still this element of we just dont know.
In this file photo taken on June 11, 2018 Tourists take a cruise aboard the Nessie Hunter boat on Loch Ness in the Scottish Highlands, Scotland on June 10, 2018.  Is the Loch Ness monster a shark? A giant catfish? A sturgeon? No, its a giant eel! Or at least it could be, according to a study published on Thursday. There is a very significant amount of eel DNA, Professor Neil Gemmell, a geneticist at the University of Otago in New Zealand said after a year-long study of the lake. Tale of a giant creature lurking beneath the murky waves of Loch Ness in Scotland have been around for more than 1,500 years  fueled by occasional sightings of Nessie. But Gemmell said his study had found no evidence of a monster-like Jurassic-era reptile in what is Britains largest body of fresh water. ANDY BUCHANAN / AFP/Getty Images
Gemmell noted however that despite the idea of a giant eel having been around for decades, nobody had ever caught a giant one in the Loch.
The international team of scientists took their samples of so-called environmental DNA (eDNA) in June last year.
The use of eDNA sampling is already well established as a tool for monitoring marine life like whales and sharks.
Whenever a creature moves through its environment, it leaves behind tiny fragments of DNA from skin, scales, feathers, fur, feces and urine.
This DNA can be captured, sequenced and then used to identify that creature by comparing the sequence obtained to large databases of known genetic sequences from hundreds of thousands of different organisms.
The first written record of a monster relates to the Irish monk St Columba, who is said to have banished a water beast to the depths of the River Ness in the 6th century.
Legend of Loch Ness Monster will be tested with DNA samples
The most famous picture of Nessie, known as the surgeons photo, was taken in 1934 and showed a head on a long neck emerging from the water. It was revealed 60 years later to have been a hoax that used a sea monster model attached to a toy submarine.
Countless unsuccessful attempts to track down the monster have been made in the years since, notably in 2003 when the BBC funded an extensive scientific search that used 600 sonar beams and satellite tracking to sweep the full length of the loch.
The most recent attempt was three years ago when a high-tech marine drone found a monster  but not the one it was looking for. The discovery turned out to be replica used in the 1970 film The Private Life of Sherlock Holmes, which sank nearly 50 years ago.
Gemmells team included scientists from Britain, Denmark, the United States, Australia and France.
http://torontosun.com/technology/loc...be-a-giant-eel

Sep 10th, 2019
" Loch Eil, a fjord in home area of Clan Cameron, sometimes referred to as Lochiel. Lochiel, Scotland, a historic place on Loch Eil that was home to Donald Cameron of Lochiel, the 19th Lochiel."

Sep 11th, 2019
They did a complete survey of Loch Ness with a fleet of boats spread across the breadth of the loch using top and side scanning sonar. They found zilch.

Sep 12th, 2019
A LOCH NESS boat captain claims to have spotted Nessie on his ship’s sonar.

Mike Bell captured the remarkable image while he was taking a group of tourists for a trip on the famous loch on June 27.

The sonar picture shows the bottom of Loch Ness, a fish – and a long, thin object about 115ft (35m) below the surface.

When the 24-year-old circled and took readings at the same spot the object had disappeared, tending to rule out a log or other inanimate object.

Mike, from nearby Drumnadrochit, had just finished explaining the story of Loch Ness and the castle on the water when a tourist spotted the anomaly on his sonar. 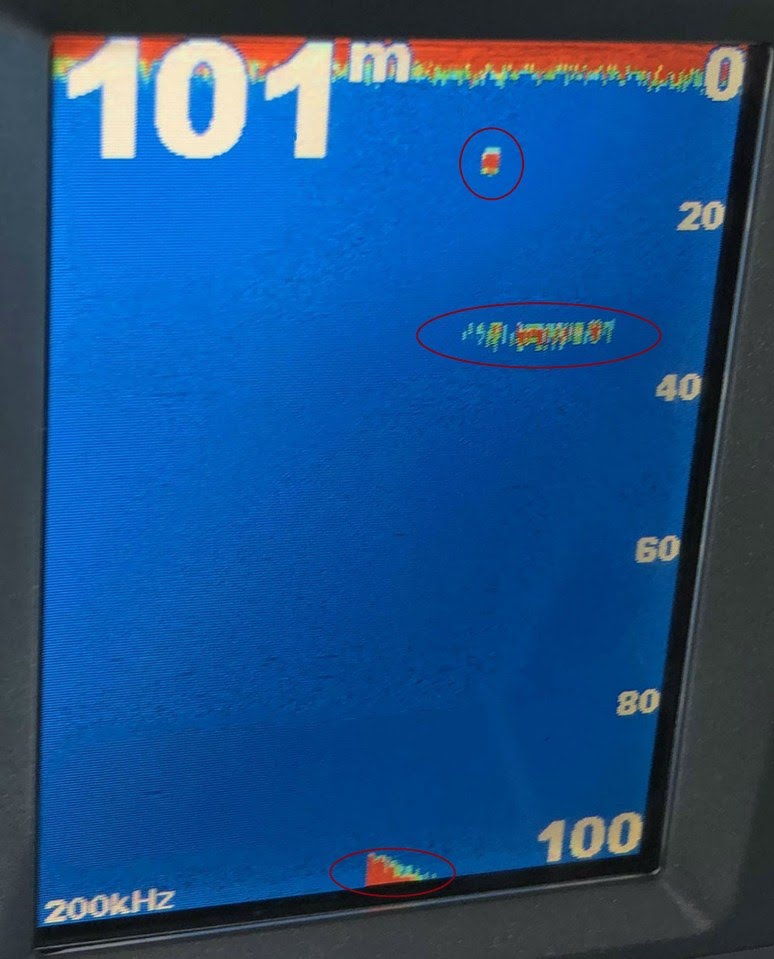 They did a complete survey of Loch Ness with a fleet of boats spread across the breadth of the loch using top and side scanning sonar. They found zilch.

They found a mountain of empty whiskey bottles and another mountain right beside it composed of piled-up golf balls.