Harriet Harman is elected Deputy Leader of the Labour Party

Blackleaf
#1 Jun 24th, 2007
Harriet Harman was today elected Deputy Leader of the Labour Party. She beat the strong favourite, Education Secretary Alan Johnson, in the final round of voting. Six candidates battled for the title.

But, unlike other countries, Britain's unusual uncodified constitution means that it does NOT mean that Harman will become Deputy Prime Minister. The United Kingdom actually possesses NO formal permanent office of Deputy Prime Minister. However in special circumstances in the 20th and 21st centuries British Prime Ministers have chosen to designate one of their cabinet colleagues to possess such a role as a form of honorific. Unlike analogous offices in some other nations, a British Deputy Prime Minister, where one exists, possesses no special powers above those of his ministry and does not possess the theoretical powers of the Prime Minister in the latter's absence or illness. 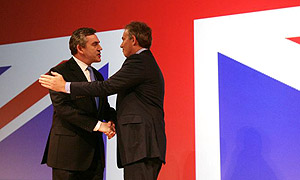 Tony Blair congratulates Gordon Brown today as he is crowned as the new Leader of the Labour Party. He'll become PM on Wednesday.

HOW THE FINAL OF THE DEPUTY LEADERSHIP RACE FINISHED. THE CANDIDATE WITH THE LEAST VOTES IN EACH ROUND IS ELIMINATED. HARMAN WON BY THE SKIN OF HER TEETH IN THE FINAL

The justice minister emerged as the surprise victor with 50.43 per cent support after fifth preferences were taken into account.

Education Secretary Alan Johnson, the bookies' favourite to become Gordon Brown's partner at the top of the party, was a close second. New deputy leader: Harriet Harman is elected Deputy leader of the Labour Party, though she may not necessarily become Deputy Prime Minister.

Harriet Harman was a devotee of the New Labour project from its inception.

But despite displaying unswerving loyalty to the cause, her political career has been far from plain sailing.

Even before Labour came to power, Ms Harman found herself embroiled in controversy as shadow health secretary when she sent her son to a grant-maintained school.

Despite party policy opposing such schools, Tony Blair stuck by her and after 1997 she joined the Cabinet as Social Security Secretary with the daunting task of reforming the welfare system.

However, the MP for Camberwell and Peckham did not have long to get used to the trappings of power.

Her popularity among Labour MPs was dented by rows over cuts to benefits for lone parents.

And a stormy relationship with her deputy Frank Field - often spilling out into public disagreements - provided a further source of embarrassment for the Government.

By 1998 the Prime Minister had run out of patience, and both were sacked in a reshuffle - making Ms Harman the administration's first major casualty.

Deprived of her insider status, Ms Harman could easily have followed the well-trodden path to become a backbench "sniper" against the Government.

But instead she chose to accept the snub gracefully, and prove her commitment as a humble MP. This show of loyalty was rewarded after the 2001 General Election, when she made a surprise return to the front bench as Solicitor General.

This was followed by a switch to become Minister of State at the Department for Constitutional Affairs when Labour secured its historic third poll victory in 2005.

She now holds the title of Justice Minister after the DCA took on responsibilities from the Home Office and was renamed the Ministry of Justice.

Although a long-term cheerleader for Mr Blair, Ms Harman has achieved the tricky feat of keeping a foot in Gordon Brown's camp at the same time.

She strongly backed the Chancellor as the right man to take over from Mr Blair.

The 56-year-old's bid for the deputy leadership may well have been helped by her Old Labour credentials. She was on the front bench through much of the 1980s and is married to party treasurer and trade union leader Jack Dromey.

Mrs Harman's campaign focused largely on her appeal to women voters and her record in promoting gender equality.

She has been described as Labour's "in-house feminist".

However, she has also been mocked by some Parliamentary colleagues for over-enthusiastic political correctness, earning the nickname "Harriet Harperson".