Labour Party leader pelted with eggs during visit to market

The day after polls show that the British people trust the ruling Tory Party (which is in a coalition government with the Liberal Democrats) more with the economy - which is now on the up and exiting its worse recession since the dark days of World War II - than the Labour Party, which puts into doubt Mr Miliband's chances of becoming Prime Minister in 2015, Mr Miliband was campaigning at East Street Market in Walworth. 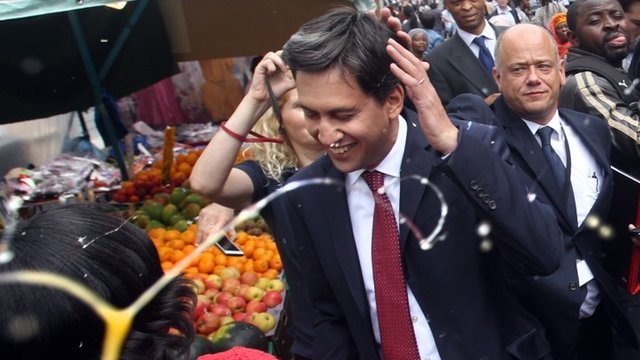 Miliband was pelted with eggs at a market in Walworth, south London, today

The Labour leader removed his jacket and told people "these things happen" after being hit by at least one egg in East Street Market, Walworth.

He carried on talking to stallholders and shoppers as the egg thrower was stopped by market security staff.

"This is not the first time it's happened to me, I'm sure it's not the last," says Mr Miliband.

"I'm always looking for new ways to connect with the voters."

Mr Miliband carried on talking to people and posing for photos.

The man who was led away told reporters that it had been an "opportunistic moment".

"I don't believe him at all. If you are poor, you are considered a burden. All they care about is the banks."

The Labour leader has just returned from his summer holiday in France and was in south London as part of Labour's efforts to attack the government's "cost of living crisis", amid criticism from some in his own party about his leadership.

Prime Minister David Cameron at Battersea Dogs and Cats Home in south Londonon Tuesday. His Tory Party are on a roll at the moment, and polls released yesterday show voters trust the Tories more with the economy than Labour

Aug 14th, 2013
Neither Labour or the Conservatives have a clue what's going on with the economy. Their leaders both deserve to be slimed.

In Britain its fallen apart under the Conservative coalition.. and it will do under Labour. There is NO difference in fundamental ideologies between the two, both are equally responsible for instituting it.

Britain's problem is the same as that of the rest of the West. Specifically the economic collapse of Europe through the failure of Free Trade, Free Markets, Monetarism (free markets in currency and credit).. and the dismantling of a sustainable structure of government planning for economic growth and a sovereign integrated industrial economy.

Nothing either of these parties propose will stem the continued free fall of the economy.

Aug 14th, 2013
Coldstream good points the world is in a mess and there is resolve to it at the moment
because there is no international leadership and no one willing to state what the real
problems are. We are on the outside swirl of the toilet flush and its going down in the
not too distant future.