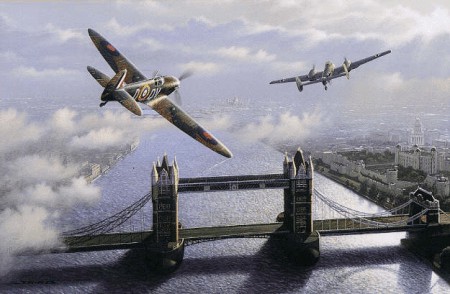 An RAF plane battles with a Luftwaffe plane over Tower Bridge, London, during the Battle of Britain in 1940-41. The aerial battle, fought over London and South east England, was Hitler's attempt to neutralise the RAF so as to help it to commence the invasion of Britain. He failed miserably. The British won the battle at a time when it was standing alone against the Nazis. The rest of Europe had either been invaded, were allied to Germany or were neutral, and the United States still hadn't entered the war.

One of the few remaining hero pilots from the Battle of Britain who was shot down five times during the war has died aged 88.

Iain Hutchinson - the "David Beckham of his day" - destroyed up to six enemy planes and ended up a prisoner of war in Stalag Luft III, made famous by the Great Escape.

One of his victims was the Nazi ace Oberleutenant Eckhardt Priebe, whom he met up with more than 50 years later in 1998.

The softly spoken Glasgow-born flier joined the RAF Volunteer Reserve in 1938 and the following year was sent for advanced training.

He joined 222 squadron and from May 1940 flew his beloved Spitfire ZD-W and took part in defensive patrols over Dunkirk. Battle of Britain hero Iain Hutchinson in his youth

In July his squadron moved to Hornchurch in Essex at the "crucible" of the battle and on its first outing, half the squadron was lost.

He was downed during contact over south west London on September 18, 1940 and bailed out over Canterbury.

He later wrote about the narrow escape: "Flames were coming out of the plane and I was being frizzled.

"The next thing I knew, I was floating free in the air. I couldn't see very well because my face had been burned.

"I was pulled my ripcord - my parachute was there - but it was rather late and I hit the ground with a thud." Less than two weeks later he had another escape when he wrote off a Spitfire after crash landing following combat.

After the Battle of Britain he flew reconnaissance missions over Norway and was shot down by the enemy.

When captured he was greeted by a German officer who said: "We've been waiting for you for a while and I'm afraid our coffee is cold but have some schnapps instead."

The hero spent the Battle of Britain as a Sergeant Pilot and ended up as a Squadron Leader.

After the war he worked for the Atomic Energy Authority and moved to Dorset with his wife who passed away some years ago.

He died at hospital in Dorchester near his home and is to be buried on Tuesday. Hero: with his war medals


Dilip Sarkar, who knew Iain and has just written a book called Spitfire Voices, Heroes Remember. He said: "It is very sad. We have had several wartime fliers die in recent months and there are a dwindling number.

"Iain was quite tall for a pilot, he must have been over six feet. He was softly spoken and was very modest.

"During the war these fliers were the celebrities of the day.

"They were used for propaganda and people would eagerly look at newspapers to see how many enemy craft our pilots had downed.

"Iain and his type were the David Beckhams of their day - but they were real heroes, not like these footballers.

"He was in 222 squadron based in Hornchurch which was in the crucible of the battle.

"Like most of the pilots he was inexperienced, but was very skilful and narrowly escaped death several times when he was shot down.

"One slight consolation is that these were the first warriors to have their experiences recorded until death.

"At least we have an archive which records their achievements and heroics and is a legacy for future generations." 
Strength (Number of planes taking part in the battle)

Result - RAF victory, despite being outnumbered by around 2 to 1