The Lie of Trump's 'Self-Funding' Campaign 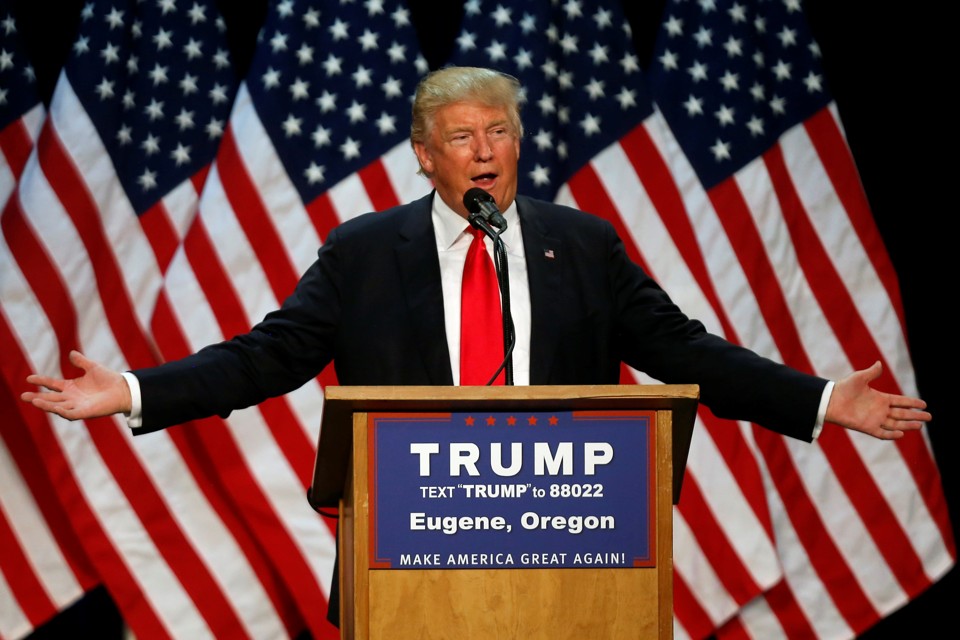 Throughout the fall and winter, a favorite media narrative was to link Bernie Sanders and Donald Trump together, two outsiders who were upending their respective parties races by blasting donor-driven big-money politics. Sanders has kept to that rhetoric into the spring, making the recitation of his famous $27 average donation a centerpiece of every stump speech. But for Trump, it has turned out to be just that: rhetoric.

With the Republican nomination all but secured, Trump has changed his tune for the general election. Trump is suddenly looking to build a major fundraising operation, complete with donors and super PACs, rather than self-funding, as hes boasted time and again that he is doing.

I will make a decision fairly soon as to that, he said last week, wiping away those months of promises. I mean, do I want to sell a couple of buildings and self-fund? I dont know that I want to do that necessarily, but I really wont be asking for money for myself, Ill be asking money for the party.

My colleague Conor Friedersdorf this week labeled that a betrayal of Trumps supporters. Thats not wrong, but Trumps claims of self-funding have always been dubious at best and actively misleading at worst.

Its not just that Trump is now courting major donors. (Sheldon Adelson, perhaps the most famous conservative donor not named Koch, has a column in todays Washington Post explaining why he backs Trump, even though Trump has (1) bashed major donors and (2) been extremely aloof to Israel, Adelsons major cause.) Its also that hes opening up to super PACs. Formally, Trump can do little to stop super PACsaccording to the federal rules, its illegal for campaigns to coordinate with them. But candidates, including Trump, have found ways to send messages. In October, Trump demanded that super PACs backing him close up shopthough only after the Post spotlighted the close ties between the Trump campaign and one of the super PACs. In April, Trumps campaign sent a cajoling letter to Great America PAC, a new super PAC backing him, complaining that the group could confuse backers and muddy his message.

More recently, however, after Great America hired former Ronald Reagan operative Ed Rollins, Trump seemed to be more accepting, calling Rollins tremendous. Rollinswho to be fair has a reputation for being a loose cannon with little regard for bossesseemed confident about the PACs role, saying, Usually a super PAC is frosting on a cake. Were going to be part of the cake.

Calling this simply a flip-flop lets Trump off the hook, though. Trump has made self-funding a major point of his campaign, proof that unlike his rivals, hes not beholden to anyone. There are highly popular Facebook posts


and its been a staple of his stump speech. At Trump events, backers have repeatedly told me and other reporters that Trumps self-funding and refusal to take money is a major selling point. Too often, the press was content to report those claims without scrutiny. In fact, Trump was never really self-fundingat least not in any traditional sense.

Trump has raised roughly $48 million so far, according to the Center for Responsive Politicsfar less than Hillary Clinton, Sanders, Ted Cruz, Jeb Bush, Marco Rubio, or Ben Carson, including super PAC donations. More than $12 million of thatfully one-quarter of his totalcomes from, you guessed it, donations to the campaign. Until last fall, they were the major fuel for Trumps run. Politifacts Lauren Carroll notes, From the start of his campaign in April through October last year, individual contributions made up about 67 percent of total money raised for his campaign.


That leaves the remaining three-quarters of Trumps fundraising. For months, staffers kept saying Trump was about to start pouring money into his campaign, and for months that was largely a feint. Now hes finally ponying up, but whether you call that self-funding is a judgment call. For one thing, a good chunk of the money that Trumps campaign is spending is actually going right back to companies controlled by Donald Trump, as payment for services rendered. The New York Times reported in February:


About $2.7 million ... was paid to at least seven companies Mr. Trump owns or to people who work for his real estate and branding empire, repaying them for services provided to his campaign. That total included more than $2 million for flights on his own planes and helicopter, a quarter of a million dollars to his Fifth Avenue office tower, and even $66,000 to Keith Schiller, his bodyguard and the head of security at the Trump Organization.

While the convoluted accounting is required by lawso that Mr. Trumps companies do not make illegal corporate contributions directly to his campaignit also means that Mr. Trump is in effect taking millions of dollars out of one pocket and depositing it into another.

For another, the money Trump has spent on his campaign has been not in the form of donations to his campaign, but in the form of loans. As Trumpa man who has strategically declared bankruptcy through his companies four times, and who has been deep in debtknows well, the thing about loans is that youve got to pay them back, unless of course the lender forgives them.

Ari Melber pointed this out in a great piece Friday. Back in March, Melber he wrote, Trump campaign manager Corey Lewandowski said Trump would not attempt to recoup the money. But that was before Trump began publicly courting donations, and now his team wont rule it out. Theres also good reason not to give Trump the benefit of the doubt.

In 2000, Trump told Fortune, It's very possible that I could be the first presidential candidate to run and make money on it. Raking in donations and then paying himself backwith interestwould be one good way to do that, in addition to payments to himself for services rendered.

In reality, self-funding a general-election campaign for president was never plausible. Trump has managed to skate through the primary with less money than his rivals because of his ability to get free media attention. That wont work as well in a general election, and Trump has estimated hed need around $1.5 billion for the general. That seems plausible; Obama and Mitt Romney each raised a little more than $1 billion in 2012.

Trump claims to be worth $10 billion, a claim which ought to be taken with a healthy dose of skepticism. Even if true, spending 15 percent of ones fortune on a presidential race seems like a gamble, although Trump has made plenty of bad bets in his career. If hes worth closer to $4.5 billion, as Forbes guesses, its an even more painful choice. The last major (using the term loosely) candidate to self-fund was H. Ross Perot in 1992. Perot was at the time worth $2.4 billion, according to Forbes. But campaigns were much cheaper then: A book by two professors pegged the total cost of Perots campaign at just $68.4 million.

How successful will Trump be? Major Republican donors are split, with some, like Adelson, getting in line; others refusing to go along; and the majority keeping quiet for now. As for the super PACs, the largest ones havent done a great to help their candidates this year, though the primary and the general election are different beasts. Meanwhile, another pro-Trump super PAC bears some of the hallmarks of a scam PAC. As a matter of principle, its hard to reconcile Trumps wildly popular claims of self-funding with his recent turn toward raising money. In practice, however, the new approach is hardly any change at all from his MO throughout the race.

Re: The Lie of Trump's 'Self-Funding' Campaign

Re: The Lie of Trump's 'Self-Funding' Campaign