Burnley were promoted to the Premiership last season, their first time in England's top flight since 1976.

Just 11 miles separate these two northern English towns and, as a result, they have one of the fiercest rivalries in English football. This fixture is known as the Cotton Mill Derby, which gets its name from the many cotton mills which exist in the two towns, as is many northern towns.

And it was Blackburn Rovers who came out on top. Burnley went 1-0 ahead thanks to an early goal, but three goals without reply gave Blackburn a 3-1 lead at half-time.

Then a solitary Burnley goal in the second half was nothing more than a consolation for the visitors. 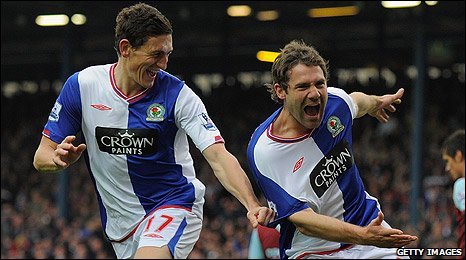 Blackburn came from behind to beat Burnley in the local rivals' first meeting in the top flight since 1966.

Rovers were stunned when Robbie Blake opened the scoring with a superb 20-yard shot after only four minutes. But David Dunn equalised with a low drive and Franco Di Santo nodded Rovers ahead after woeful Burnley defending.

Pascal Chimbonda added a third goal for Rovers with a precise finish into the corner before Chris Eagles grabbed a late consolation from six yards.

The win was no more than Rovers deserved after they recovered from being the first home team to concede a goal against Burnley in the league this season.

Blake's excellent strike, curled in from outside the box as Blackburn backed off, set up the derby for a sizzling start in keeping with the feverish atmosphere that had built up for at least an hour before kick-off. With so much pride at stake between the two old rivals - both clubs being founding members of the Football League - a match of passion and tenacity was expected.

That proved to be the case early on, coupled with a lot of quality - not least the calibre of the goals.

Dunn's effort that cancelled out Blake's opener was also a peach, curled into the corner after on-loan Chelsea striker Di Santo had perfectly laid off Morten Gamst Pedersen's cross.
As Rovers continued to press forward, driven on by the impressive Dunn, they created another chance but El-Hadji Diouf could only drag his shot wide.

Burnley, for all their attempts to play their way out of trouble, were struggling to keep Rovers at bay.

And the visitors contributed to their downfall when goalkeeper Brian Jensen fell under no challenge when trying to deal with a cross and Graham Alexander headed the ball up for Di Santo to nod into an empty net. If that goal was a messy effort, Rovers' next strike was much more pleasing to the eye.

Pedersen headed cleverly into the path of Chimbonda and the defender cut inside Steven Fletcher before slotting a shot into the far corner.

At that stage it looked a long way back for Burnley, who had yet to secure a point on their travels in this campaign.

By contrast, Rovers looked to have found some confidence and were comfortably in control.

The pattern remained similar after the interval as Burnley's lack of firepower prevented them from forcing a way back into the match.

Unable to take advantage of a spell of possession, Burnley were short of ideas and could only muster a weak effort from Fletcher and a header from Steven Caldwell.

And at the other end, the uncertain Jensen almost dropped another clanger when he allowed Paul Robinson's kick to bounce and was lucky to see his opposite number's clearance go over the bar.

Robinson tried to repeat the trick moments later and once again Jensen was almost found out, needing his defenders to hack the ball away.

Burnley did manage to get a sight on goal when substitute Eagles was played in by Wade Elliott but he hesitated and the chance was gone.

Elliott also worked an opening for Alexander a little later, but the shot was blocked.

There was definite improvement from Burnley and Eagles fired a low shot narrowly wide as they pressed to reduce the deficit.

And moments later, Eagles gave Burnley a chance of pulling off an unlikely comeback when he turned in Stephen Jordan's cross.

However, Blackburn held out for the last few minutes and almost had the final word when Pedersen blazed a volley over the bar.