He was well within his rights to use justifiable force.

May 20th, 2012
The people in the inset are different than those in the rest of the pic. Did they all change clothes after the alleged shooting?

May 21st, 2012
Shafilea Ahmed: Parents 'murdered their teenage daughter because her conduct was bringing shame on their family' | Mail Online

May 21st, 2012
If the house was bugged why did it take so long? I never did think the practice of arranged marriages was very 'fair' to the individuals. Wonder why the British Monarch doesn't set the example that they should not take place? It certainly didn't work out very well for Diana.

Stay in you delusion.

Yeah, all Christians, Muslims and Jews are so tolerant of other people. It isn't me that's deluded.

Drink more booze, it keeps most of us humored when you post.

You really are blind, the guy with the raised arm and bluish shirt is the same one in the center of the lower photo.

Funny how his hair went from black to grey between the pics.
Quote:

The man below him in the top photo is to the left of him in the lower photo.

His hair looks different, too. Also, the dude in the top photo has a shirt with a collar, whereas the one in the bottom pic has not.
Quote:

Next time take off your jaded glasses.

Perhaps you should use some glasses.

Shafilea Ahmed: Parents 'murdered their teenage daughter because her conduct was bringing shame on their family' | Mail Online

If the house was bugged why did it take so long? I never did think the practice of arranged marriages was very 'fair' to the individuals. Wonder why the British Monarch doesn't set the example that they should not take place? It certainly didn't work out very well for Diana.

Funny how his hair went from black to grey between the pics. His hair looks different, too. Also, the dude in the top photo has a shirt with a collar, whereas the one in the bottom pic has not. Perhaps you should use some glasses.

Those are valid points. A lot of aging men start graying at the front and it moves back over the years, your argument would have more validity if the shots were from the same side of the person. In the one with his back to us even the collar can't be seen clearly but that is because of a raised arm that also pulled his shirt up enough to obscure. I'm not going to cover the shadow effects because the sun was high overhead as shown by the shadow on the guy with the brown t-shirt, in the one photo the shadow almost looks like the sleeve comes down closer to the wrist. We can agree that it is a brown t-shirt right? Can we agree that the guy with the weapon is the same person and of the two types there a Jew is more likely to have a beard (easy to fake I admit)than the clean-shaven Gentiles? (Since there is a name it could be checked out to see if there are stories from the local papers) Rather than do that how about I find a clearer article where a settler has killed a Palestinian without being under any threat.

Looks different how? Magnified it some, what area are you referencing?

This clears up any mystery, you have the glasses on.
http://www.telegraph.co.uk/news/worl...estinians.html


I didn't drink as much or as often as I do now, at least I got that much from you and the usual suspects. That comes from seeing what you have swallowed and called it the truth or the best way to do (moral) things. Seriously it is enough to make a pig-farmer gag. Morality now says I have to tell you the first part of that last sentence is not at all true so the 'confusion' is from inside you rather than me. The last part is totally true and I have been down wind of one of those lagoons.
Last edited by MHz; May 21st, 2012 at 09:20 PM..

I didn't drink as much or as often as I do now, at least I got that much from you and the usual suspects.

I don't think it's fair of you to blame your drinking on mentalfuzz, EAO, Cliffy, Rebel, Loon, and the rest.

May 23rd, 2012
Is the Taliban moderating itself from acid in the face to tummy aches?
Did the poison from the previous two attacks match what would be readily available to the Taliban?

WACO, Texas (AP)  A Muslim U.S. soldier accused of planning to bomb Fort Hood troops says he wasn't seeking vengeance but justice for people in Iraq and Afghanistan, according to a recording played at his federal trial Wednesday.
Army Pfc. Naser Jason Abdo is heard telling his mother during a recorded jail visit that "their suffering is my suffering."
Abdo, 22, is accused of planning to detonate a bomb inside a Killeen restaurant frequented by troops from the nearby Texas Army post and then shoot any survivors.

Saudi Woman Defies Religious Police: It Is None of Your Business If I Wear Nail Polish - YouTube

May 24th, 2012
Don't get so prissy colpy and bear, colpy's own article leads to another article that tells how the Taliban would handle things, poison had nothing to to with anything, they would simply close them down or threatening the teachers. Considering the number of women and kids that drones have taken out without apology making some students puke for a few days is well within their cards to play. Perhaps you are just in denial that NATO is that ****ed up. They cut-back the time spent studying English, that the school followed those directions would be enough for the US to poison them as a 'reminder' who the boss is. Even the Taliban knows poisioning 'your subjects' is going to get you bad PR with the parents and relatives and friends of those students. You can't tell me NATO doesn't use family members safety as a lever to get what they want. What isn't on the table for the group that planned and carried out Dresden?

(in part)
Recently, the Taliban demanded the closure of some schools in two eastern provinces. In Ghazni province, the closure of schools was in retaliation for the government's ban on motorbikes often used by insurgents. In Wardak province, the Taliban has been a little more compromising, locals say, and has allowed some schools to open late after making changes to the curriculum.
"The Taliban are fine with us as long as we do what they want. They tell us what to teach and what not to. If we don't do what they say they have a representative who comes checking things," one teacher said. "They have increased the number of hours we teach religious subjects in a week and decreased other subjects like English. If we didn't, they would threaten teachers, and it is very much possible that they would close the school down."
Taliban tightens grip on Afghan schools - CNN.com

You condemn cosmetic bans yet allow our children get used to being groped by strangers.
http://www.youtube.com/watch?v=_2-cqQ9qG5c

So how's that old Arab Spring going? You remember  the "Facebook Revolution." As I write, they're counting the votes in Egypt's presidential election, so by the time you read this the pecking order may have changed somewhat. But currently in first place is the Muslim Brotherhood candidate Mohammed Morsi, who in an inspiring stump speech before the students of Cairo University the other night told them, "Death in the name of Allah is our goal."

uhuh and it was the entire Muslim community that did it, not the relatively few fundie scum calling themselves "Muslims".

"Terrorism has no religion" - I forget who said that.

May 26th, 2012
Saudi Woman Defies Religious Police: It Is None of Your Business If I Wear Nail Polish - YouTube

They are secretly standing sentry in the Queen's Own Bovine Brigade as a deterrent to the Muslim hoards.

Their motto is : Alphas Amongst the Alfalfa

BTW, pay attention: the monument that the speaker so hates is to Canadian soldiers that freed Holland in WWII
Last edited by Colpy; May 27th, 2012 at 09:22 PM.. 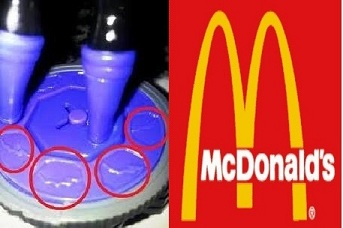 Saudi Arabians are angry at a McDonald's toy which they say mocks their prophet Muhammad. According to a report appearing today (5/27/12) on the Arabic news website, Kermalkom.com, the McDonald's fast food restaurant "abused the Prophet Muhammad by placing his name at the base of a toy that is being distributed as part of the Happy Meal, a toy which steps on the name 'Muhammad.'"

The toy consists of a blue superhero figurine (apparently a Power Ranger Samurai; click here for pictures). It stands on one leg, and, when the lever is pressed, it pounds on the base with the other leg. According to the Saudis, the designs that appear all around the base, where the figurine stomps its foot, is really the name "Muhammad" written several times in circles.

The toy had been distributed a few days before Saudi children and their parents began to take note of the name. Soon thereafter, Saudi Muslims launched several campaigns against McDonald's in "response to the savage attacks on the noble Prophet," under banners like "Help your Prophet!" and "Together in support of the Prophet."

Saudis, "demanding the strongest possible punishment for the restaurant" and insisting that "they will not be silent until this is realized," further complained how such an obvious insult could pass the supervision of the management at McDonalds.

In response, "Saudi McDonald's" has withdrawn the toy from all its restaurants, "in order to safeguard against any accusations or misunderstandings."

Jun 1st, 2012
'Once Girl Gets Her Period&Can Keep House She is Ready to Marry Plus Aisha Never Complained" - YouTube


(SOUTHFIELD, MI, 5/29/12)  The Michigan chapter of the Council on American-Islamic Relations (CAIR-MI) recently held a Know Your Rights presentation at the Islamic Center of Detroit in Detroit, Mich.
The presentation primarily focused on the rights of citizens and legal residents within American borders to have an attorney present while being questioned by local, state and federal law enforcement.
The session also focused on citizens and legal residents right to refuse answering invasive questioning by federal law enforcement agents pertaining to religious beliefs and practices.
CAIR-MI recently filed a federal lawsuit against Custom Border Protection (CBP), FBI and Transportation Security Administration (TSA) for invasive religious questioning of Michigan Muslims.


Islam: Making a True Difference in the World - One Body at a Time

Jun 2nd, 2012
Yeah, Colpy, nothing like violent protesting against something that wants to remove aspects of a way of life that's centuries old. Unlike something really important like this: http://www.tbnewswatch.com/news/150786/Nine-police-officers-injured-in-hockey-riot-police-chief

Yeah, Colpy, nothing like violent protesting against something that wants to remove aspects of a way of life that's centuries old. Unlike something really important like this: http://www.tbnewswatch.com/news/150786/Nine-police-officers-injured-in-hockey-riot-police-chief

What does the idiot riot in BC have to do with it??? BTW, I am definitely NOT a sports fan, so don't blame me.

While I would not approve of a law banning the veil, it is obvious that the police need to be able to demand its removal for ID purposes in any number of instances.....to check licenses etc being one example.

That said, if you wear the full veil, you simply don't belong in this country, and I suggest you return to whichever Islamic hellhole you crawled out of.....