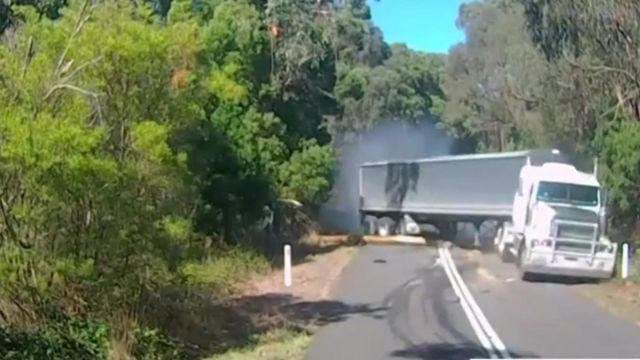 Two drivers had a lucky escape after a lorry skidded out of control on a bend.


The incident happened near Carlisle River in Victoria, Australia.

The driver who caught the footage on his dashcam, had stopped to help a woman whose car had been damaged after driving over a tree trunk in the road.

Re: Close shave in Oz

Apr 8th, 2016
Speaking of close shaves downunder, did you notice the story about the school play in NZ, they were doing Sweeny Todd, and used an actual straight razor, with duck tape over the blade? TWO students rushed to hospital with slit throats.

Re: Close shave in Oz

Apr 8th, 2016
What a crappy little road that is haven't they ever heard of maintenance?

They could use gangs of convicts to cut back the brush @ the side of the road.