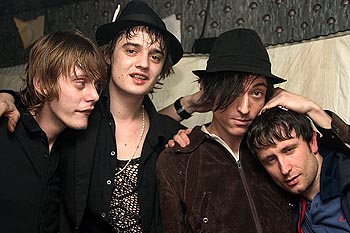 Whitnall (far right) is a member of punk rockers Babyshambles

Kate Moss's boyfriend Pete Doherty has outraged anti-firearms groups after a member of his band was pictured wielding a double-barrelled shotgun on his tour bus.

Mick Whitnall, the guitarist of the Babyshambles, is seen posing menacingly with the shotgun pointed at the camera.

In other pictures taken at the same time, the Doncaster-born musician, 38, appears a little the worse for wear.

Sources say Doherty, 27, bought the shotgun and also a pistol "for protection" as his band toured the country in recent weeks.

A spokesman for the band has said the weapon was in fact bought by Whitnall himself, and was deactivated.

"Babyshambles have never had working guns on their tour bus," said the spokesman.

The band also had a toy plastic gun on board the bus."

But weapons experts claimed that the guns appeared capable of firing.

A close friend of the singer said: "Pete bought the shotgun and a 9mm Luger handgun last October because he kept being robbed for his cash after a gig and he is terrified it will happen again. The last time he lost loads - about £10,000."

The extraordinary images have been revealed just weeks after the troubled rocker was refused a gun licence by police in the Cotswolds, where Miss Moss has a house.

Mothers Against Guns spokesman Lucy Cope said: "It's dIsgusting that Babyshambles should be glamorising gun culture."

Firearms expert Mike Yardley said it was "impossible to tell" if the gun had or hadn't been deactivated. "However it is being treated in an entirely inappropriate manner, and one couldn't think of a worse example for young people," he said.

Re: Pete Doherty in weapons outrage

Feb 24th, 2007
It's amazing that this talented lad has managed to stay alive for so long. Far better musicians have succumbed to the evils of drug abuse[ and may have used much less of them,too]! I keep expecting to hear of his sudden demise from drugs any day now..shouldn't there be a DeathPool happening on him?