Town stitches 64 million years of its history into 85ft tapestry

Blackleaf
#1 Jul 21st, 2019
A handmade tapestry that captures 64 million years of a market town's history across 85 feet of linen has been unveiled after 30 years of painstaking work.

The volunteer-made masterpiece includes prehistoric monsters, Roman residents, the horrors of the Black Death and a royal kidnapping.

The 15 scenes were stitched by more than 60 people across three decades using vibrant material to immortalise the colourful past of Royston, in Hertfordshire.

Town spends 30 years stitching 64 MILLION years of their local history in 85ft of fabric nearly 1,000 years after the Bayeux tapestry was commissioned

The 15 scenes were stitched by more than 60 people across three decades using vibrant material
Locals in Royston, Hertfordshire, began stitching it three decades ago and only finished it in 2018
One tableaux shows kidnapping of King James I's dog by locals - who were angry at the cost of his court

A handmade tapestry that captures 64 million years of a market town's history across 85 feet of linen has been unveiled after 30 years of painstaking work.

The volunteer-made masterpiece includes prehistoric monsters, Roman residents, the horrors of the Black Death and a royal kidnapping.

The 15 scenes were stitched by more than 60 people across three decades using vibrant material to immortalise the colourful past of Royston, in Hertfordshire.

An enormous tapestry telling the story of Royston in Hertfordshire has been unveiled, after volunteers spent 30 years stitching it. It starts in the prehistoric period, when the town was underwater 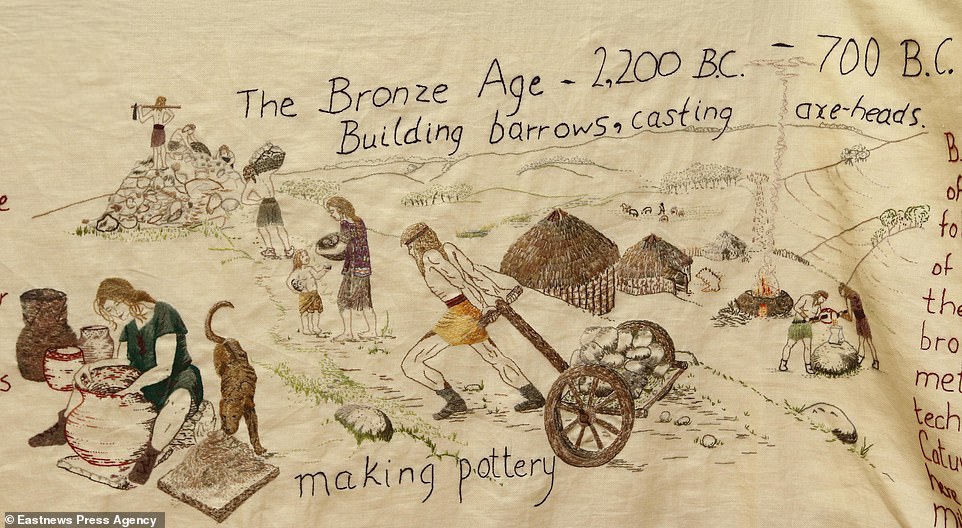 By the Bronze Age, local people were building barrows, casting axe-heads and making pottery, as the description reveals 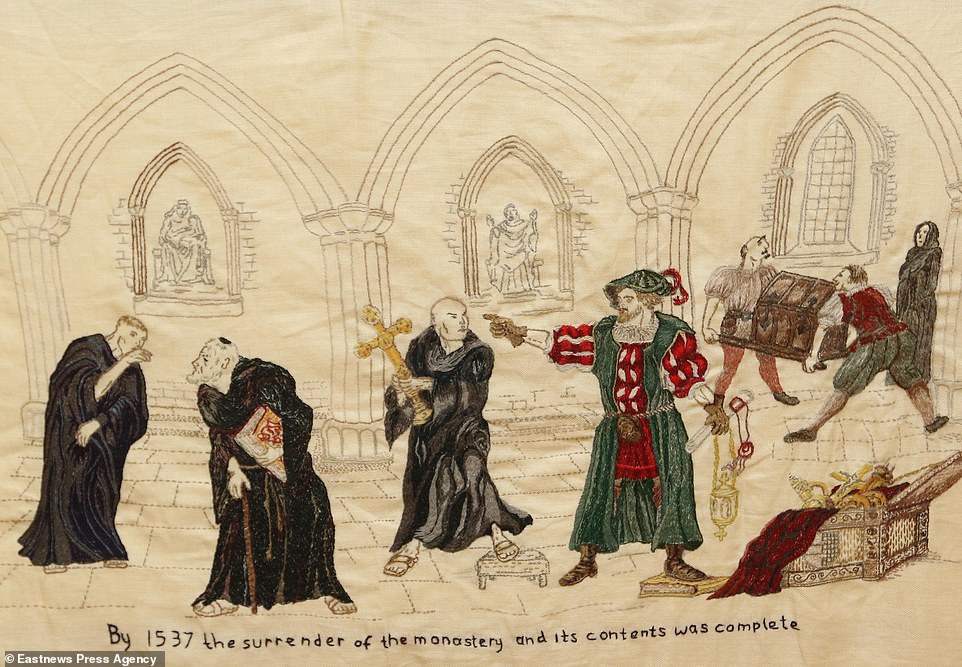 The Dissolution of the Monasteries under Henry VIII is recorded in this section, which states that by 1537 all the goods had been removed for the local priory 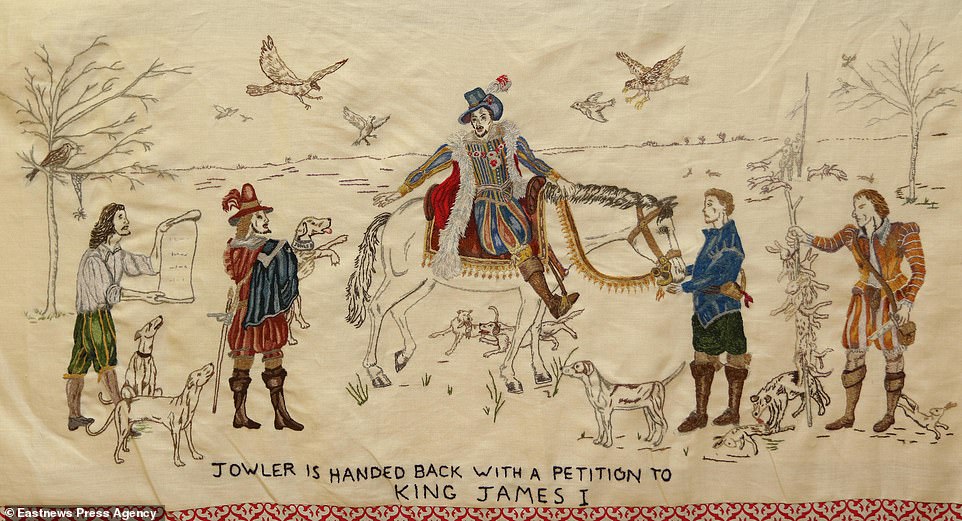 One memorable tableaux shows the kidnapping of King James I's dog by townspeople - who took umbrage with the cost of hosting his court. They later returned it with a petition 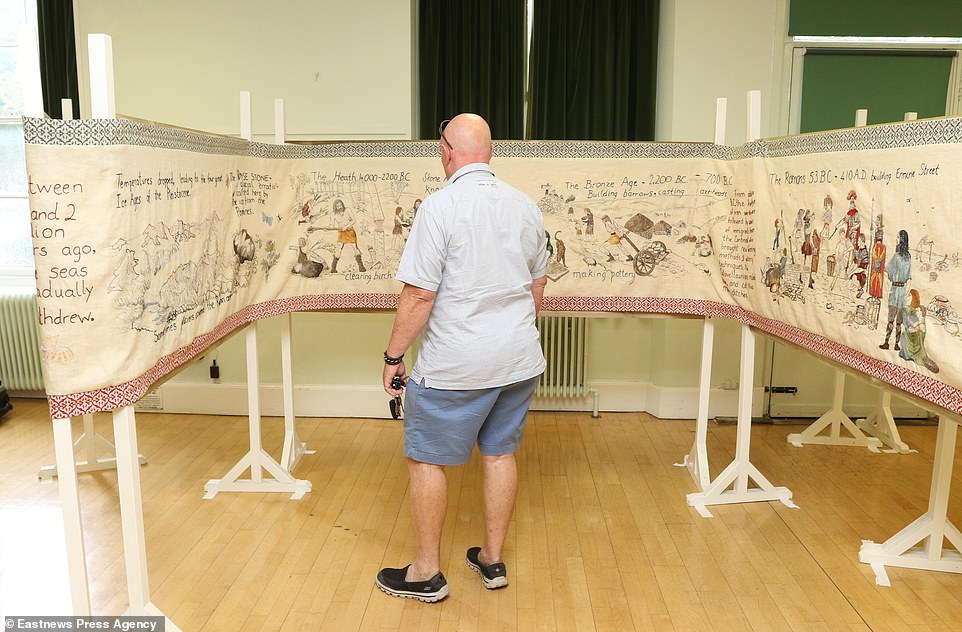 A visitor inspects the stunning piece of work, which is up on display at Royston town hall after decades of hard work by local people

Officials say they won't reveal the value of the piece which was exhibited for the first-time last week and attracted more than a thousand visitors.

They flocked to see the one-of-a-kind creation, which begins with an imagined vision of Hertfordshire when it was underwater 64 million years ago.

One memorable tableaux shows the kidnapping of King James' I dog by townspeople - who took umbrage with the cost of hosting his court.

The monarch's mutt was returned unharmed but with a petition reminding him how much Royston paid when his hunting lodge was in full swing.

As well as that unusual tale the tapestry shows the founding and dissolution of the Augustinian Priory, the construction of a roman road and finishes in 1742 with the discovery of the mysterious Royston Cave.

The bizarre hand-carved structure sits under the town and has sparked intrigue for hundreds of years - with some claiming it was created by the Knights Templar.

Now locals in the peaceful market town have been able to view the stunning artwork for the first time in its maiden public exhibition.

Incredibly plans started before the fall of the Berlin Wall in 1989 and the first stitch was made the same year Manchester United were crowned the winners of the first Premier League.

And as work slowly continued on the sprawling piece Number 10 has had six different Prime Ministers call it home. 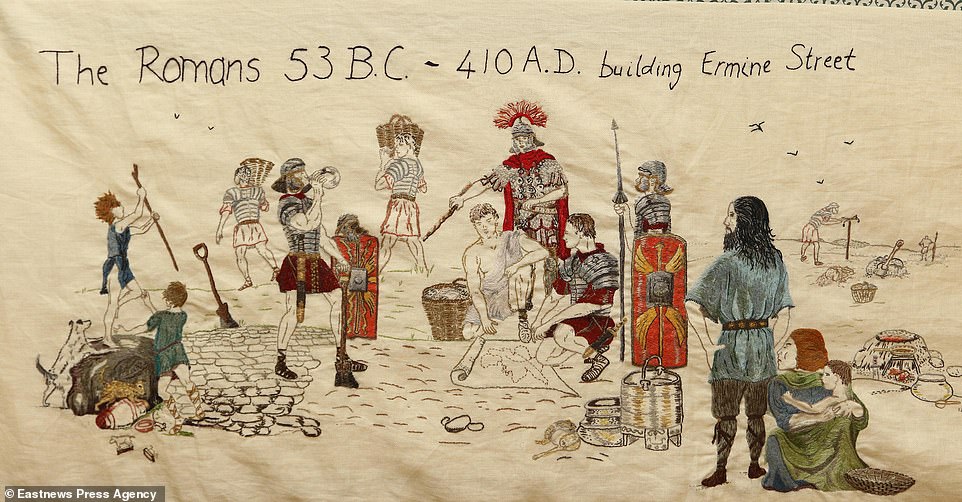 The tapestry is shows scenes in chronological order. This panel introduces the Romans, who built a road called Ermine Street 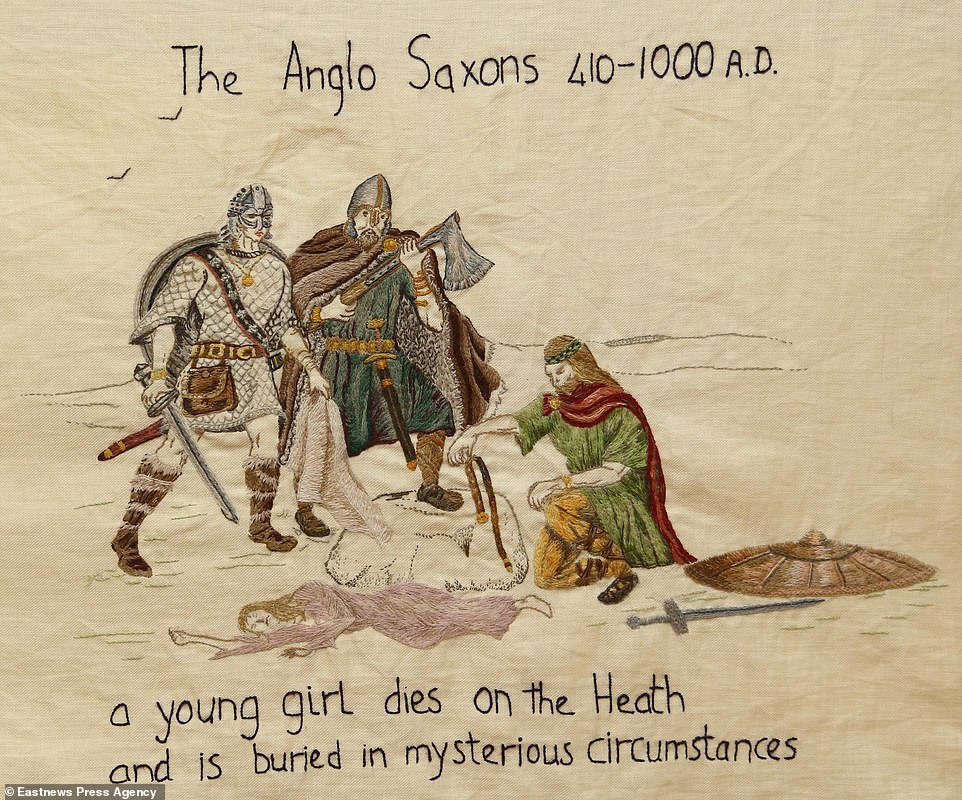 An Anglo-Saxon murder is recounted in this section. The 15 scenes were stitched by more than 60 people across three decades 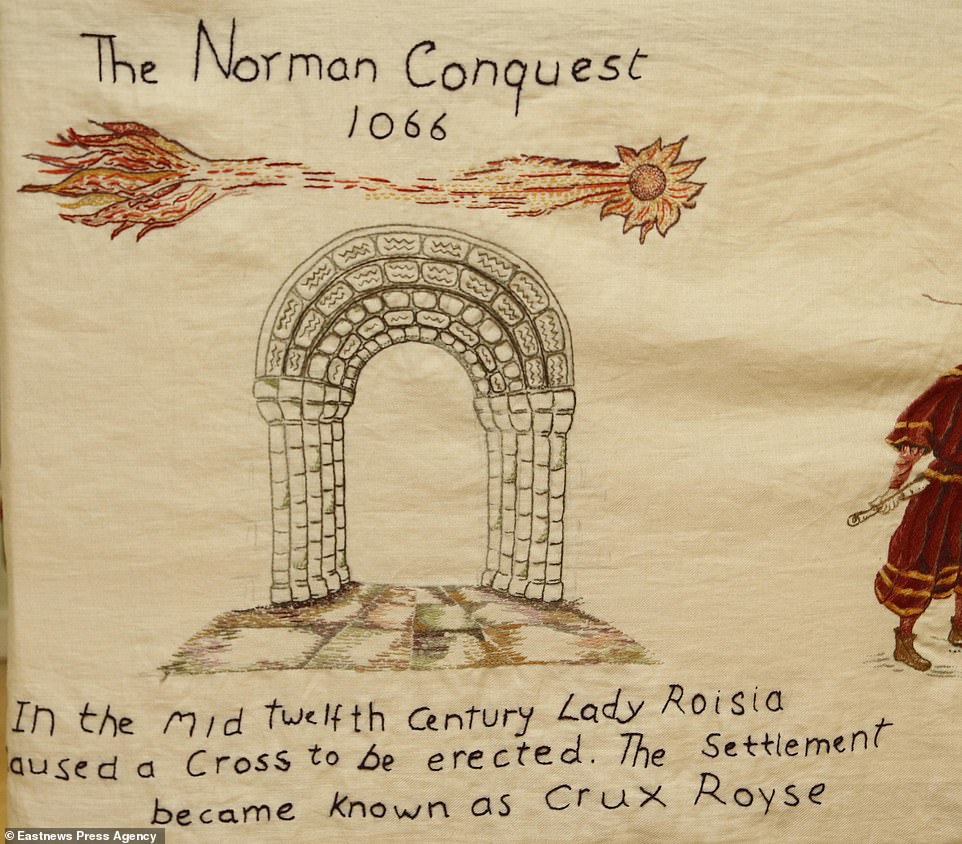 The Norman Conquest was famously heralded by comets racing across the skies, according to Anglo-Saxon mythology

The ravages of the Black Death are recorded in this panel. The disease decimated England's population because there was no known cure

Many of the scenes in the tapestry depict royalty, like this one, while others show the day to day life of ordinary people 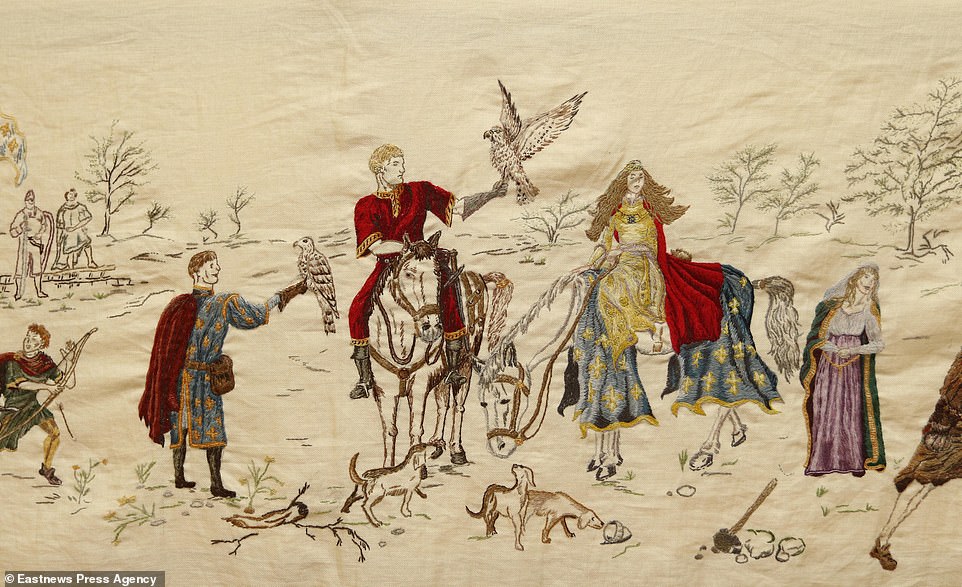 Hawking was a favourite pastime for medieval monarchs, and is depicted in this colourful panel in the Royston tapestry

Curator and manager of the town's museum Madeline Odent says the tapestry is testimony to the town's spirit and history - but has a universal appeal.

The 27-year-old said: 'It's incredible, it's a wonderful example of how important local history is on a national scale and tells stories every local town across England can relate to.

'My favourite piece is King James' coat, it's a fantastic piece of work artistically and the stitching is amazing.

'The Royston townspeople kidnapping the King's dog is hilarious, he had a hunting palace in town and whenever he brought the court to town it was rather expensive and he wasn't paying well.

'So they ended up kidnapping his favourite dog and sending it back with a petition. It is beautiful and quite unique.'

Measuring in at 83ftx2.5ft, each of the scenes has anywhere between 10,000 to a million stitches made in crewel wool.

Despite being modelled on the Bayeux tapestry it is in fact an embroidery, which uses traditional material and Jacobean techniques.
And its width was determined by the dimensions of a traditional hand loom. 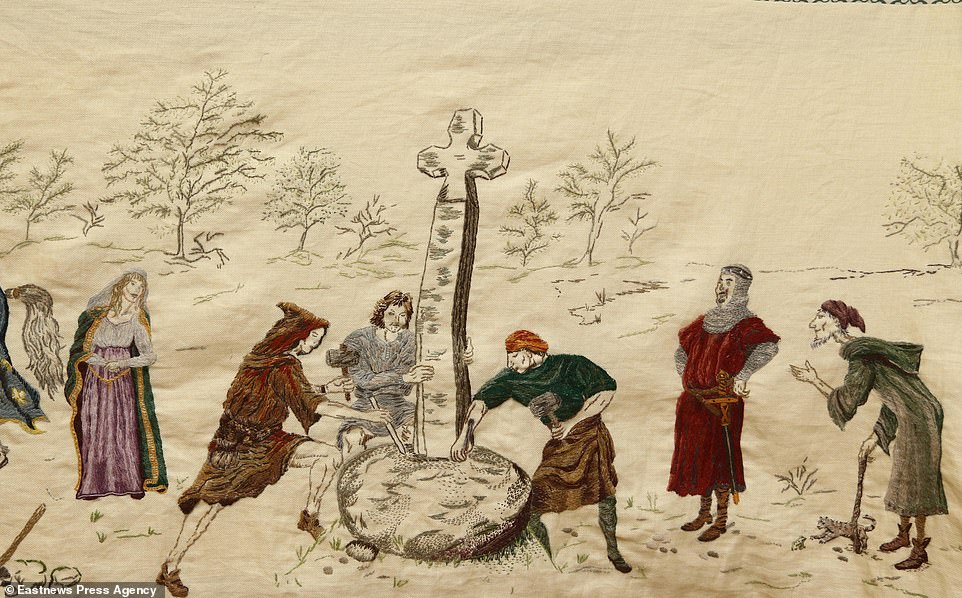 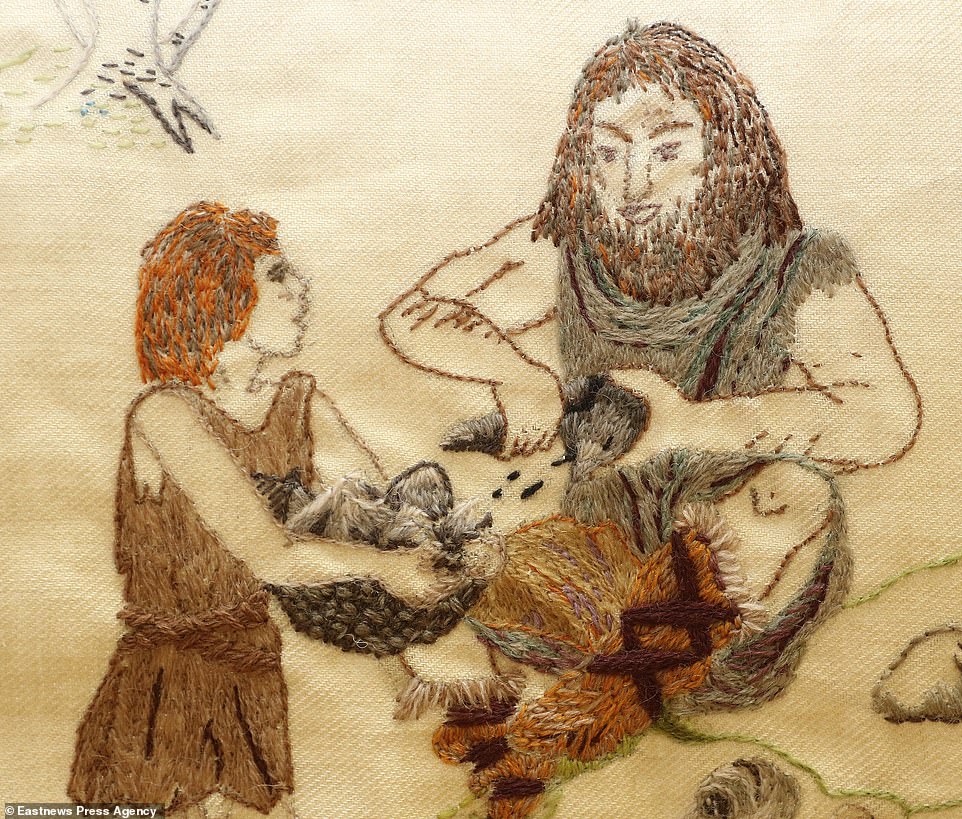 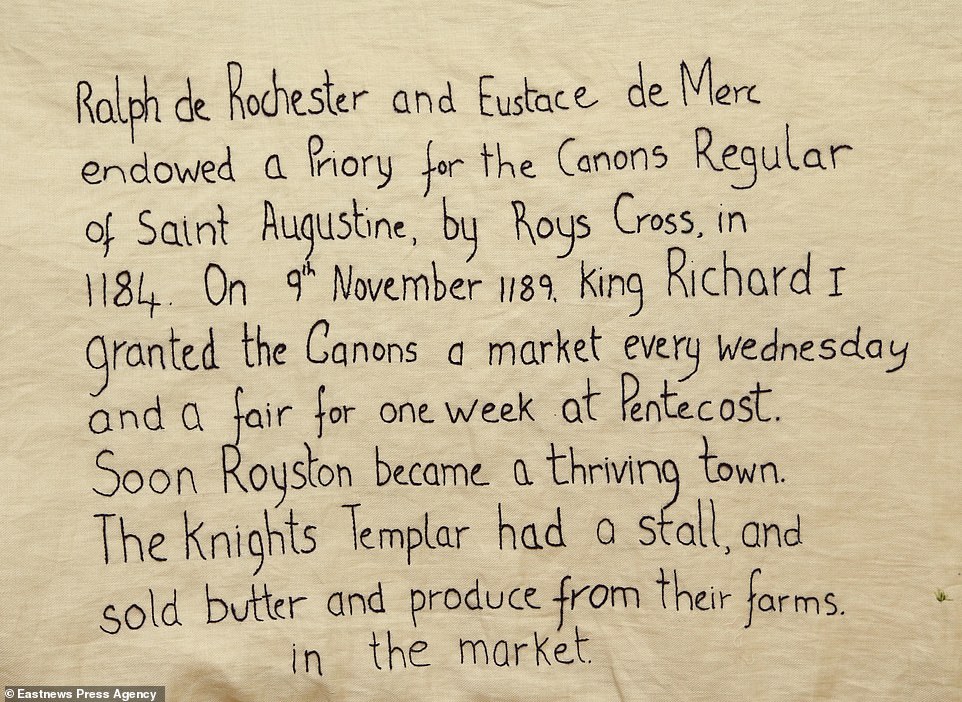 The 'tapestry' is made from linen twill, a cambric cotton backing, a linen cotton border and crewel wool was used for the stitches.

Apart from the use of modern dyes and machine-woven material the stitches were made exactly the way they would have been 400 years ago.

Mrs Odent said: 'I have not heard of anything like this.

'There have been people who have done it in different tapestries but they have broken it into different pieces or done it piece by piece.

The tapestry was exhibited in the town hall until Thursday. It will now go on tour whilst a permanent exhibition space is prepared in the town. 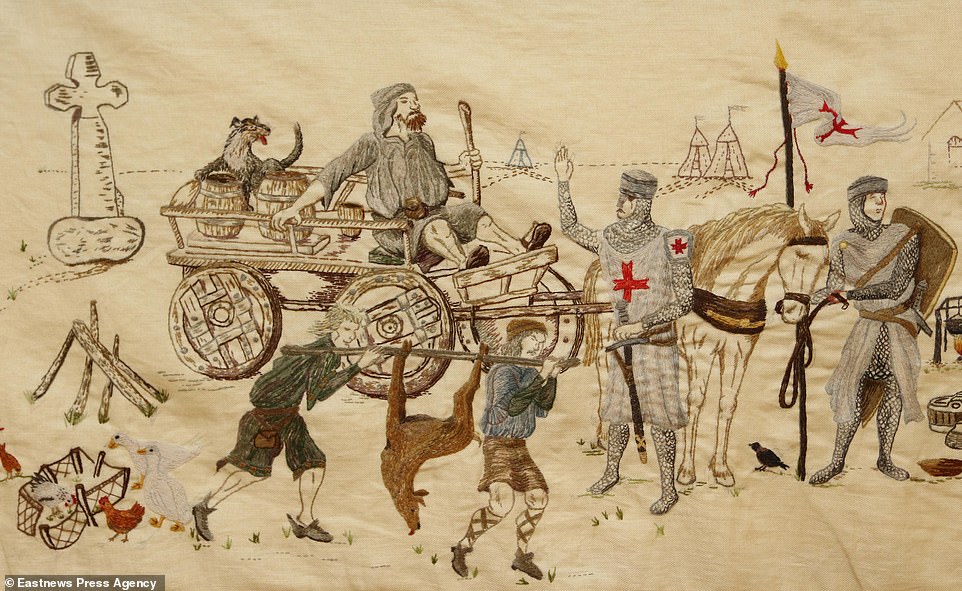 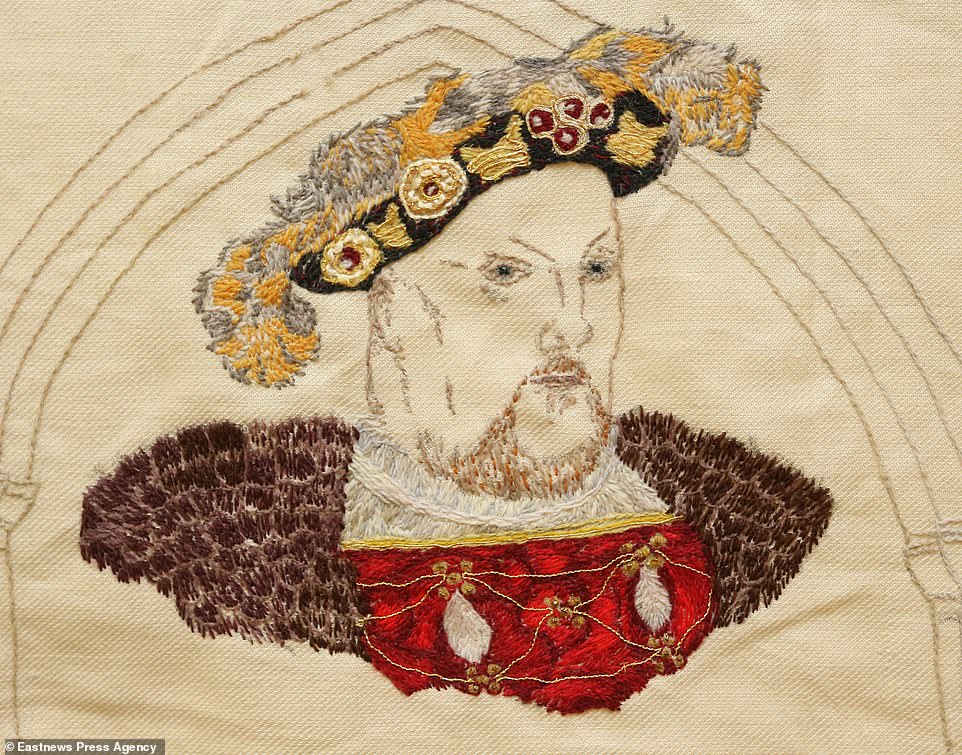 A representation of Henry VIII on the tapestry. The Tudor king is best known for his six wives and beginning the English Reformation 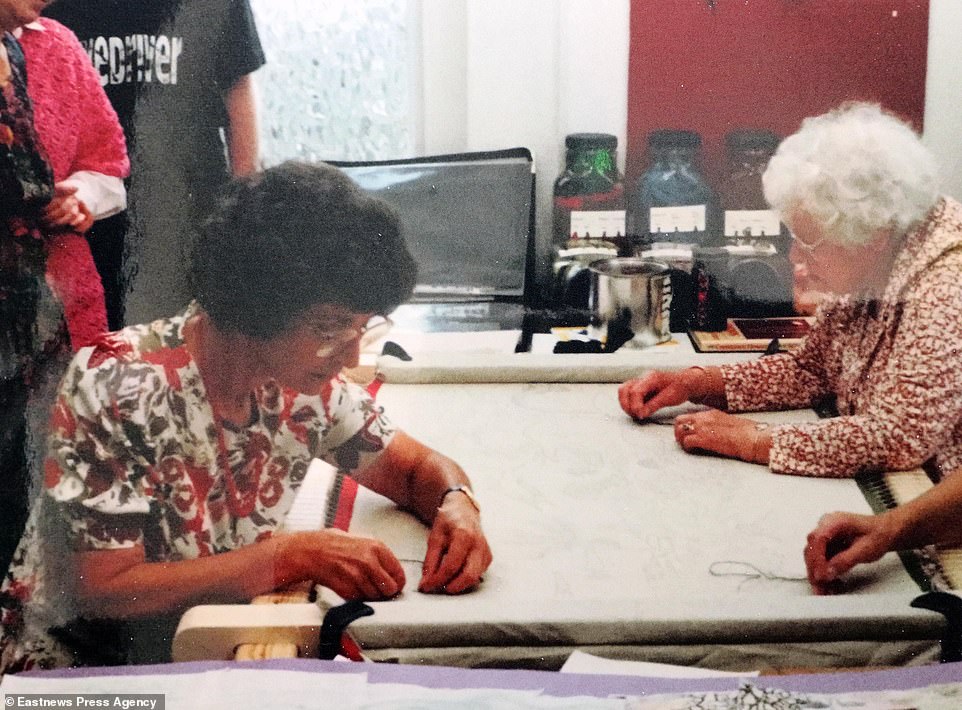 Two ladies working on the tapestry several decades ago. Curator and manager of the town's museum Madeline Odent says the tapestry is testimony to the town's spirit and history - but has a universal appeal 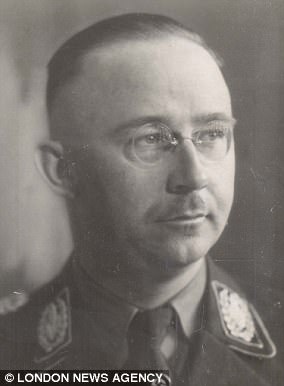 Nazi connections: Heinrich Himmler (pictured) coveted the Bayeux Tapestry because it is a part of Germanic history

1066: Between seven and twelve thousand Norman soldiers defeat an English army of a similar size at what is now Battle, East Sussex

1476: The embroidered cloth depicting the battle is referred to for the first time in an inventory of Bayeux Cathedral

1732-3: Antiquarian Smart Lethieullier writes the first detailed English account of the tapestry while living in Paris - but it is not published till 1767

1792: During the French Revolution, the precious artwork was declared public property and confiscated to be used as a covering for wagons - but it was saved by a lawyer who hid it in his home

1804: In a move dripping in symbolism, Napoleon - under the impression France was about to invade and conquer Britain - had the tapestry temporarily moved to Paris for display

1870: The tapestry is removed from Bayeux once again during the Franco-Prussian War - but it is moved back two years later

1944: The Gestapo removed the tapestry to the Louvre in Paris - just days before the German withdrawal. A message from Heinrich Himmler - who coveted the cloth because it is a part of Germanic history - is believed to imply the Nazis planned to take it to Berlin

1945: It was returned to Bayeux, where it has been ever since