New Made in Canada Skate Guard a Hit with NHL

Made-in-Winnipeg skate armour piloted by Jets, taking off in NHL 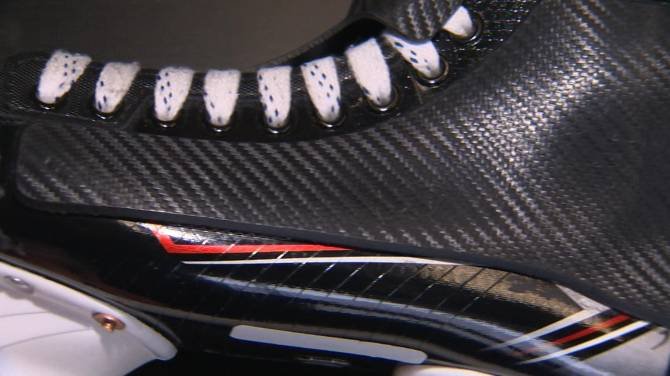 A new, custom fit, piece of skate armour to protect hockey players from major foot injuries is making waves across the NHL.


The product is sleek, light-weight and custom-cut for each player.

Its a really cool plastic that when you put it in a toaster oven, it moulds and you can stick it to the side of the skate and it protects your feet, Dan Palsson said.

Palsson is the CEO and managing editor of Askja Tech, the company behind the new skate shield.

We came up with something protective, shiny and thats pretty easy to put on, Palsson said.

The ribbed guard is created, made and tested in Winnipeg.

The shield helps protect four key areas of a players foot from injury which could otherwise result in a player being benched for weeks.

The company said product testing showed the shields reduced the impact of a slapshot by about 30 per cent.

If you hit the ankle bone or heel youll be out a lot longer, and every time you put your skate on after that it hurts.

"The company said there have no serious foot injuries, no bruised or broken bones, and no games missed by players using the skate shields, which have now been officially endorsed by the NHL."