China's rich are giving it away

By Zou Hanru (China Daily)
Updated: 2007-04-20 08:44 In a world of fast-expanding human desire and greed, giving away one's wealth is a rare virtue. In fact, many billionaires in China are now making huge donations for education, social welfare and healthcare.
According to the 2007 Hurun Report's Chinese Philanthropists List, compiled by Briton Rupert Hoogewerf, 30 of the China's 100 richest were among the 100 most generous in 2006, up from 20 the previous year.

"Almost all the top 100 rich Chinese are considering the concept of charity. With a good policy environment, more and more wealthy people are setting up their own charitable funds," Hoogewerf reported. Of the total 10 billion yuan ($1.23 billion) donated last year, the amount given by the 100 was 3.9 billion yuan compared with 3.75 billion yuan the previous year.
Shenzhen hotel entrepreneur Yu Pengnian topped the list of 100 philanthropists last year with 2 billion yuan ($258 million). Most of his money went to cataract surgery for some 100,000 people.
Niu Gensheng, chairman of Mengniu Group, has promised to donate all his shares in the dairy group to a charitable fund he set up in 2005.
Billionaires make news for financial success. They make headlines especially when they make it to Forbes magazine's list of the world's richest.
Humanity is benefited through their benevolence. By giving away wealth, billionaires can help mitigate human misery. Their grace enlightens society.
Warren Buffett, the world's second-richest man at the time, made an unprecedented announcement last year that he was donating $37 billion to the foundation run by his friend Bill Gates, then the world's richest man.
According to Fortune magazine, Buffett, with total assets worth $44 billion, gave away 85 percent of his wealth from his stock in Berkshire Hathaway to five foundations. The donation was the single largest charitable gift in US history.
Buffet believes that giving one's children too much money is a burden, not a gift.
According to him, a very rich person should leave his children enough to do anything, but not enough to do nothing. Buffet and his wife had decided that they would not pass huge amounts of money to their children since they believed their children grew up with the advantages of wealth. 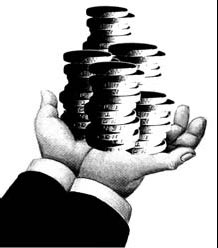 Buffet said they had "a gigantic head start, and that dynastic mega wealth would further tilt the playing field in America, when we should be trying to make it more level." And that is why he gave away his wealth to the Bill and Melinda Gates Foundation to fight disease, reduce poverty and improve education.
The Chinese government also has a role in creating a social and taxation environment to promote philanthropic giving. Fairer regulations and faster administrative procedures must be ensured so that the rich don't experience obstacles in giving away their money.
Philanthropy is a means to build community by growing community funds. It is a means of affecting social change. Billionaires can take the pioneering role to make the best use of their money so that others emulate them.
In this age of unrestrained individualism, we need to teach our young to give more value to helping others. Therein lies enduring happiness. Noble deeds reveal a state of mind.
Through benevolence, these billionaires have proved that it is the mind, and not the wallet, that is the road to contentment.
E-mail: zouhr@chinadaily.com.hk

HAHAHAHAHAHA!!!! What a pile of Pravda! The Soviet version of truth! CBC propaganda meisters lead an army of greedy civil service union Hogs! Their convoluted arguments in favour of irrelevant and irresponsible LIE-beral double talk is wearing very thin with the Cdn public!

Wealthy people around the world routinely give away millions in a token display of humility and yet they never seem to have any trouble paying their bills!

Some LIE-beral offered up this speculation about how to deal with our soaring debts and the LIE-beral need to funnel more gravy to Hogs- its an older post but still very valid:

Perhaps a 10 cent per litre tax could be used to pay down debt. I use as much gas as most, and enjoy most things which would become more expensive. First we could ban together, like a large Canadian family, which has as a primary goal that of providing for their children and grandchildren, and pay off the federal debt. Following the retirement of our national debt we could start to work provincial debt.

I probably should have performed the math. Statscan would have the info on how many litres of gas are sold in any given period, and the provisions of our debt would likely be there too.

Who would pay a gas tax which was earmarked for debt elimination? As I write this I remember the infrastructure spending which is headed our way federally. As much as this seems counter intuitive, it is also necessary. The financial pump requires proper priming and our infrastructure has many requirements.

Funny, in perusing my thoughts, this is not counter intuitive. The government, for the people by the people. We just have to pay our debts and tend our golden geese. Hydro, LCBO, Water, 407, etc.

Our wretched Ontari-owe premier McWynnty-known to some as The Great Whore because she has sold herself, her party and our future to the Hogs has made plans to add an EXTRA 4.5 cents tax to each litre of gas sold here...along with her planned sale of Hydro and she will STILL have a 5 to 6 BILLION DOLLAR deficit for 2016-ASSUMING she has not ALREADY FUDGED her debt numbers to make herself look better! And this does not take into a count the MANY billions MORE that our Lie-beral prime minister-the Boy with nice hair...for Brains will be BORROWING and WASTING!.

The LIE-beral asks: who would pay a tax earmarked for debt elimination? The answer is this: NOBODY WILL PAY! Ordinary people are too busy trying to pay the taxes ALREADY levied against us, too busy trying to get enough to eat and get shoes for the kids and etc.....there is NOT enough money for new taxes because the govt has ALREADY WASTED all they have TAKEN from us on the Mars real estate fiasco, on gas plants, on ORNGE and E-health, on bribery scandals in Sudbury, in endless OPP police investigations that are so slow and costly and finding so little evidence of any wrong doing that citizens are wondering if OPP is COVERING for Lie-berals. Or we could talk about the THREE BILLION DOLLAR LIE-beral adscam theft and attendant legal bills, could talk about the five hundred million dollar penalty paid by the Chretien Lie-berals so they would not have to follow through and purchase helicopters ordered by the Conservative Mulroney govt.

We could talk about Ndp leader Bob Rae and the Urban Transport Development Corp-a bus building mess that makes the Lie-beral Mars building mess look mild by comparison! We could talk about sloppy govt health record keeping and how it was possible for the same woman to give birth in three different hospitals on the same day in Ontari-owe-and we could mention the Lie-berals griping about racists and bigots and anti immigrant whiners when the news of health care abuses by so called `visitors` to Canada were revealed! And these are just the highlights of a HUGE litany of waste and greed and stupidity!

As for civil service Hogs-their pensions are in the RED-their entitlements are so HUGE that govt cannot shovel out OUR money to them fast enough and their pension funds are at great risk of bankruptcy. The outgoing chairman of the Ontari-owe high school teacher pension management group appeared on TVO The Agenda and put out numbers that indicate we will owe OSSTF teachers about FIFTY FIVE BILLION DOLLARS in deferred pension IOU`s by about 2018 and failure to make these payments (and we DONT HAVE THE MONEY) will probably put the OSSTF pension fund-the LARGEST and richest in ALL North America by the way-into bankruptcy...and there are EIGHTEEN OTHER Hog unions out there each with their own Lie-beral written IOU`s!!!!

The Hogs certainly will NOT pay a debt retirement tax as they are too busy DEMANDING MORE govt money and feel they are already short changed and being cheated! As long as govt keeps looking at new `revenue tools` we will struggle financially. The only solution is SPENDING LESS on salaries and pensions for HOGS!

The LIE-berals talk about our `Cdn family` but he does not mention that it is UTTERLY DIS-FUNCTIONAL-with some kids being starved and others GORGED on govt gravy-thanks to BLATANT Lie-beral discrimination against ordinary voters!

Apr 9th, 2018
The Chinese government also has a role in creating a social and taxation environment to promote philanthropic giving.

In a dictatorial, one party police state, you have no choice but to submit to mandatory "philanthropic giving". I wonder if the author's grandfather had to " philanthropically give up everything" before he was incarcerated in a Maoist re-education camp out in the Gobi Desert?