Blackleaf
#1 Nov 7th, 2005
Britain has more entrepreneurs than any other country in Europe - and today, 19-year-old Martin Halstead - dubbed "Baby Branson" - launched his own airline, Alpha One.

He came up with the idea of creating his own airline whilst he was in a coffee shop. 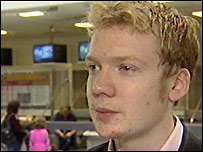 A NEW budget airline that will fly routes too small for larger carriers has launched today.

Alpha One is the brain child of nineteen-year-old Martin Halstead, who thought up the airline in a coffee shop and has been dubbed the "Baby Branson".

The airline will start services to Southampton and Blackpool from the Isle of Man on November 21, and aims to carry 75,000 passengers in its first year of operations.

The company has already purchased one 18-seat BAE Jetstream 31 plane with plans to lease another.

Mr Halstead said before boarding the inaugural flight between Southampton and the Isle of Man: "Im numb at the moment. I find it so hard to believe but its fantastic. Im very excited about it."

Alpha One will be a ticketless airline with complimentary in-flight
refreshments, such as champagne, included in the price.

Fares for the twice daily, Monday to Friday service start from £49 one way to Southampton and £29 one way to Blackpool, plus taxes and charges.

"We offer a really good on-board product at a price thats affordable to most people in the country," added Mr Halstead.

The company originally announced it would launch the airline with flights from Oxford to Cambridge but the idea was scrapped when the Isle of Man route came up.

Mr Halstead said the company may revisit the Cambridge to Oxford route next year.

Educated at Abingdon School in Oxfordshire, Mr Halstead packed in his A-Levels to pursue a pilots career and secured an air transport licence at the Oxford Air Training School at the age of 18.

He was struggling to find work as a pilot so decided to launch his own airline while discussing his options with friends in June last year.

"Its very difficult to get a job in the industry at the moment so I thought I would start my own company," he said.

"Im probably the only airline boss in the UK who will actually fly the
planes."

He funded the project largely from the sale of his first business, airline
simulation software company EMAtch, which he launched at the age of 15.

Mr Halstead, who now employs a team of 26 staff, plans to train on the aircraft so he can fly himself along with experienced older captains.

He also said he was "honoured" to be compared to Sir Richard Branson.

"I find it a huge compliment," said Mr Halstead. "Richard has been a huge inspiration to me and has given me a lot of advice as we have gone along. To be put in the same ball park as him is a real honour."