Keystone pipeline shut down after crude leak in South Dakota

So basically it is a consumption tax, although scaled so that fuels producing higher amounts of GHGs pay a higher tax. So theoretically, in that aspect, users will be encouraged to switch to cleaner fuels and/or supplement their needs with alternative fuels. The downside is, if I read this right, that it will cost progressively more to produce GHGs as the tax and the price of the fuel rises. Isn't that the plan?

The real downside is the high cost of replacing existing infrastructure before it it's time due to artificially high prices. There is also something fundamentally wrong with one government department taxing another government department.The other problem is that no one is working to make alternatives available to rural residents and businesses.

Stick to the Leo DiCaprio script.

That's what you're good at. 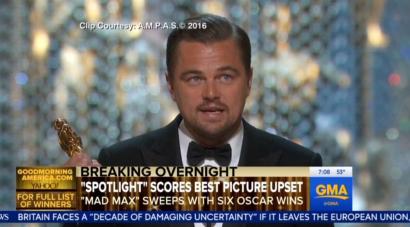 You're comparing an utterly useless product like cigarettes with a substance that virtually runs the global economy? Seriously?

You can't see the parallels? How smoking went from being a socially acceptable glamour product to filthy addiction to be pushed out of sight in the course of three or four decades? People were happy to turn a blind eye to the obvious downside of tobacco but after a few years of badgering on the health risks driven home by constant tax hikes and restrictions people who still indulge are looked down on. And their numbers are a mere fraction of what they used to be. How's the PR campaign in favour of fossil fuels going? Can't you see the same path being laid out for fossil fuels?

Plan on attracting new manufacturing to Canada with the promise of nice, clean, unreliable, intermittent wind and solar power? Good luck with that.

Pretty lame argument there. Wind and solar are still political balms to keep the greens happy. Hydro electric. Nuclear. Those are bargaining cards worth having.

The point that is slipping past you guys is that the science is fast taking a back seat to overall public perception. It's at the point now that "environmental responsibility" is a buzzword that gets more votes than "jobs" or "economy". Even uninformed voters get a vote, and fewer and fewer people are listening to the pro-fossil fuel side. It's a safe bet that more and more of your tax dollars will be going to support the side of the argument that you aren't on.
Last edited by Nick Danger; Apr 6th, 2016 at 05:05 PM..

Apr 6th, 2016
The eco movement only generates traction during the boom parts of the economic cycles.

Back when Gore was telling his lies, there were global marches, protests, concerts and all kinds of hi-jinx because folks were secure,making lots of cash and could afford to be stupid.

You'll notice that when the sub-prime mortgage meltdown hit that no one was observing Earth Day/hour/minute, etc anymore... No protests or marches that attracted any more than a few dozen people... No more buzz about the new green IPOs and start ups.

Fact is Nick, you got it backwards; people just don't care about this the way you think they do. Sure, they'll pay lip service but that's about it.

As far as gubmint is concerned, the tobacco example hits far closer to the mark than you think.... Think about it, why hasn't gvt just outlawed cigarettes or applied so much tax that a pack cost $200?

Fact is, gvt doesn't want you quitting smoking ~ they'd lose too much money.... This is the same BS model that is the carbon scheme

Most of the electricity is made using so-called fossil fuels.

Fact is, gvt doesn't want you quitting smoking ~ they'd lose too much money.... This is the same BS model that is the carbon scheme

Actually, they figured out a long time ago that the cost of smoking, once you figure in medical costs, lost employment time, even related fire losses, far outweighed the tax revenue. The problem was that it is legal to smoke and to simply outlaw it would mean restitution for everyone involved in production and distribution, plus dealing with the smokers themselves crying about their civil rights. Their strategy was the long game, education, taxation, restrictions of freedom to practice their habit. In 1965, when tobacco companies were hiring "scientists" to say that smoking didn't cause cancer, fully half the adult population in Canada smoked. Today that number hovers around 16%.

Now, the fear of dying of cancer was driven home by people watching their friends and relatives waste away in hospital beds. We don't have anything like that for atmospheric pollution just yet, and the warning signs we do have are still being poo-pooed by scientists who more often than not, have connections to big oil.

Fact is Nick, you got it backwards; people just don't care about this the way you think they do. Sure, they'll pay lip service but that's about it.

You may be correct to a point. I agree that there are a lot of people that are more talk than action when it comes to what changes they can make, but I also think that this is on people's minds at election time and that will light a fire under the politicians. I also think the "experts" that are denying the effects of GHGs are more and more taking on the appearance of hired guns and charlatans, and that this perception is spreading. That's just me, but I have a vote too.

And it's why China is choking in a battleship gray smog and they are making more advances that any other country. Refreshing to see Floosy admitting it was all about hiking taxes on everyone and never about cooling the earth.

China is cleaning up but it's not because of the Chinese people, it's because of our need for steel.

The only thing that will reduce the use of fossil fuels is a cost effective alternative .
We have not yet reached that stage . Lots of people are rushing out to purchase electric cars , this will eventually lower the cost making them more wide spread . It still will be along time before electric will be powering ocean going freighters or 747's for that matter even long haul trucks .

Yes a change away from fossil fuels will happen but not soon.

Nuke is fossil fuel too and still a intense carbon emitter but moonbats are clueless.

Nuke is fossil fuel too and still a intense carbon emitter but moonbats are clueless.

Everything I've read puts nuclear energy carbon emissions on par with wind, and about half of that associated with hydroelectric, even after you factor in the construction of the reactor stations and the mining/processing of the uranium.