A group of Manitoba farmers has declared their local MLA a "missing person" in a front-page newspaper ad, in response to what they feel is betrayal from Infrastructure Minister Blaine Pedersen, who represents the Midland constituency.

The Bipole III Landowner Committee purchased a front-page ad that ran along with a letter on Feb. 2 in the Carman-based Valley Leader community newspaper, as part of a new effort to get Manitoba's Progressive Conservative government to listen to them.

"During the election campaign, both [Pedersen] and the premier were actually attending a lot of our meetings and were making promises that if they couldn't change the Bipole III route, at least they would make sure that we'd get to negotiate fairly and, you know, negotiate an agreement with Manitoba Hydro," Kohler said. 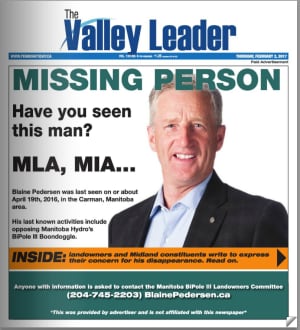