Now, modern Britons are to do the same.

The first long barrow to be built for 5,000 years is taking shape at All Cannings in Wiltshire, a county dotted with ancient structures, such as Stonehenge, Avebury and the original long barrows.

Developer Tim Daw, who owns the farmland on which it is being built, said he was "absolutely thrilled" with its progress.

"It's turning out so much better than I could possibly imagine," he said.

Mr Daw said he had always had a passion for archaeology and the idea for it came out of a "classic pub conversation" - "Wouldn't it be nice to get buried in a long barrow?".

Once completed later this year, people will be able to house the cremated remains of their loved ones in special niches inside the long barrow.

And there is a lot of interest in the burial chamber, with even people abroad looking to buy niches.

5,000 years from now and archaeologists may start excavating the All Cannings long barrow and uncover the remains of their ancient ancestors.

The first "Neolithic" long barrow to be built in the UK for 5,000 years is attracting interest from all over the world.

The burial chamber at All Cannings near Devizes in Wiltshire will contain niches housing urns of cremated ashes, and set to be finished later this year.

Developer Tim Daw, who owns the farmland on which it is being built, said he was "absolutely thrilled" with its progress. 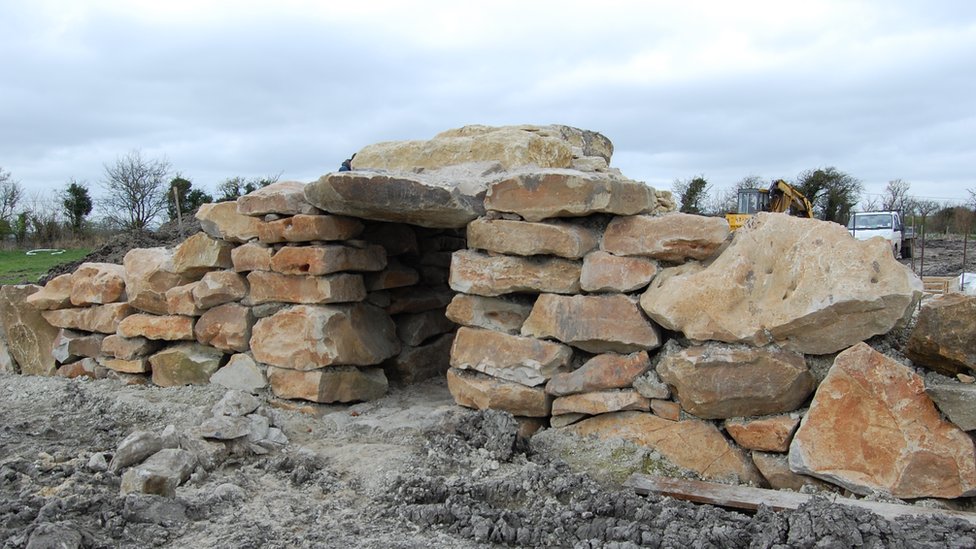 "It's turning out so much better than I could possibly imagine," he said.

"A lot of that is down to the stonemason, coming up with the idea of how to build it and insisting on doing it the proper way, using real traditional materials and methods. That's paying off in spades, with the quality of it and the feel of the place.

"For some of it, the stone has almost told us how to do it. At the entrance, when they fitted together it just felt right and it looks right." 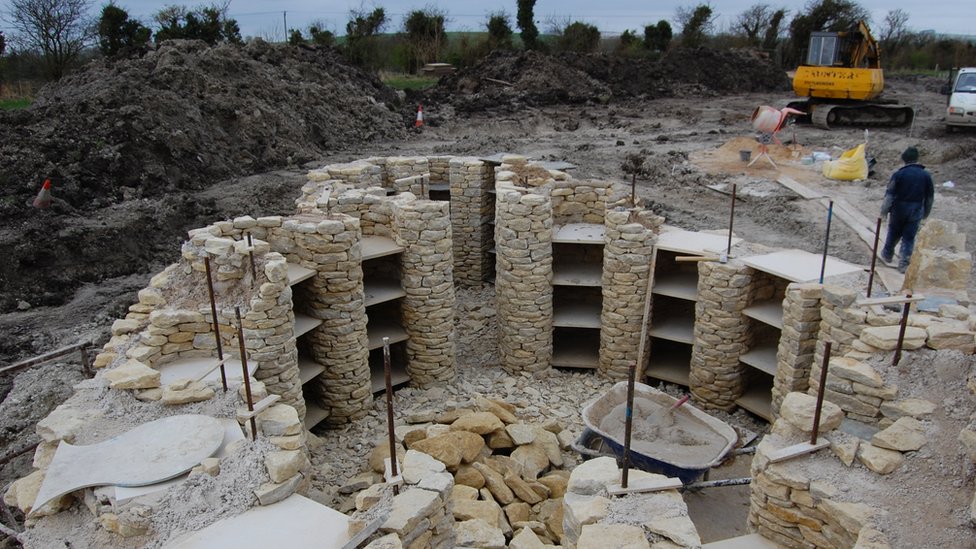 Mr Daw said he had always had a passion for archaeology and the idea for it came out of a "classic pub conversation" - "Wouldn't it be nice to get buried in a long barrow?".

"Then I was walking round the farm one winter's morning and it was misty, very quiet and the sun was just rising, and I thought, 'I wouldn't mind spending eternity here'," he said.

"I thought, 'You could put a long barrow here with the winter sun coming in'. The idea all came together very quickly." 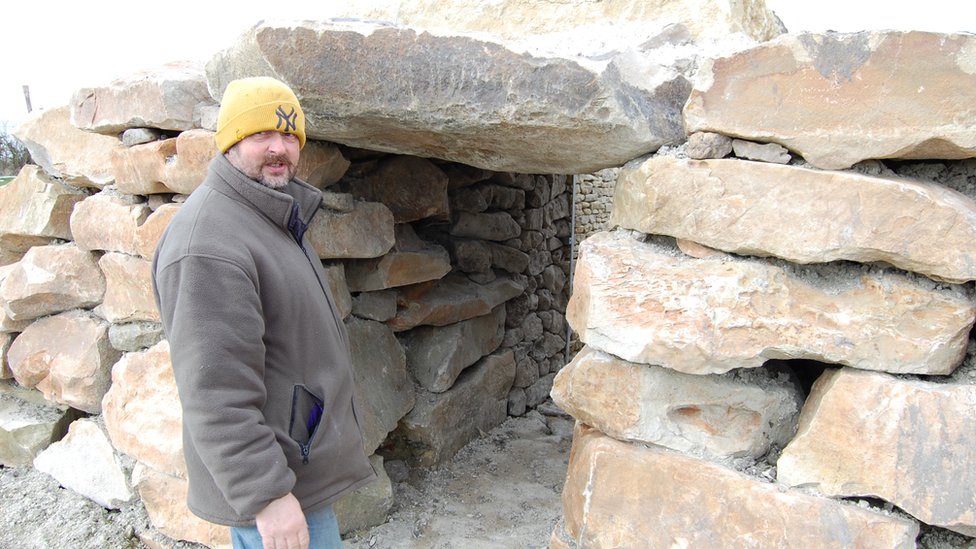 When the barrow is complete people will be able to pay to have ashes in urns stored within chambers inside the mound - some niches have already been sold - as an alternative to a crematorium.

"People have bought niches right from before we had even broken the ground," said Mr Daw. 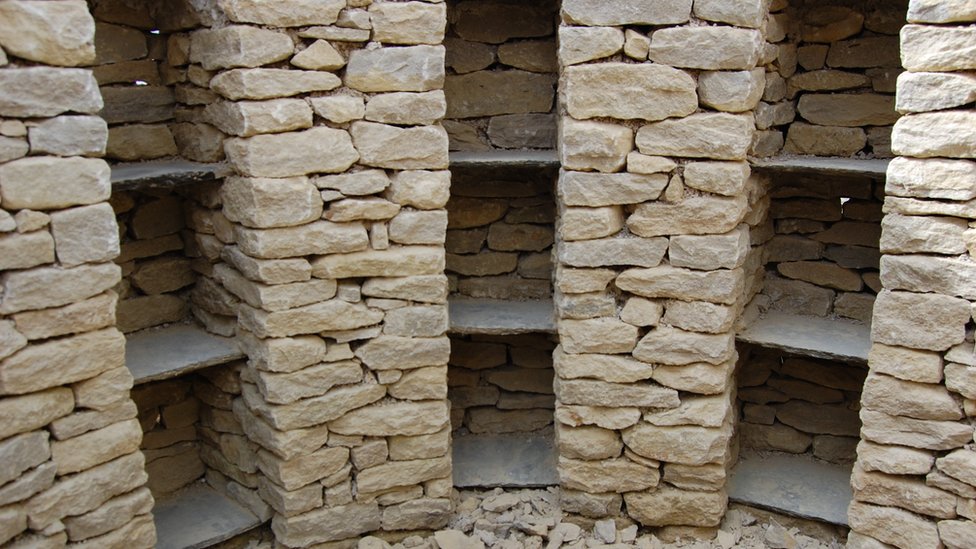 "Someone from California has bought a niche, and she's very welcome.

"I'd love to have this as a meeting place, as so much of the Neolithic was about in Wiltshire, with people from all areas coming together."

Stonemason Geraint Davies described it as "not your usual job" and a "once in a lifetime opportunity". 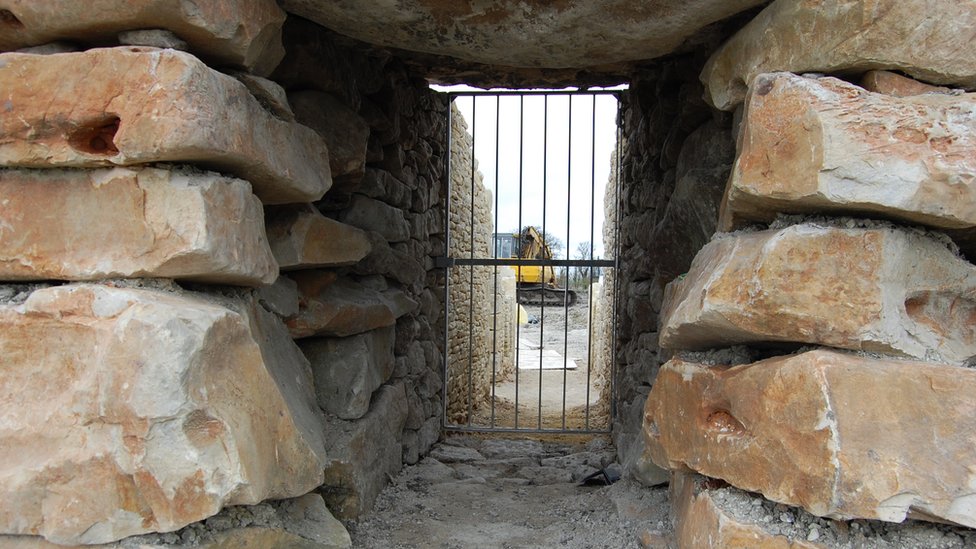 "I saw an article about it in the The Times last year [when plans for it were submitted]," he said.

"It stated it was going to be in concrete, and we thought something like that needs to be in natural stone, so we approached Tim and he let us do it.

"I quite like archaeology. It's fascinating to go to Stonehenge and see how they managed to construct that." 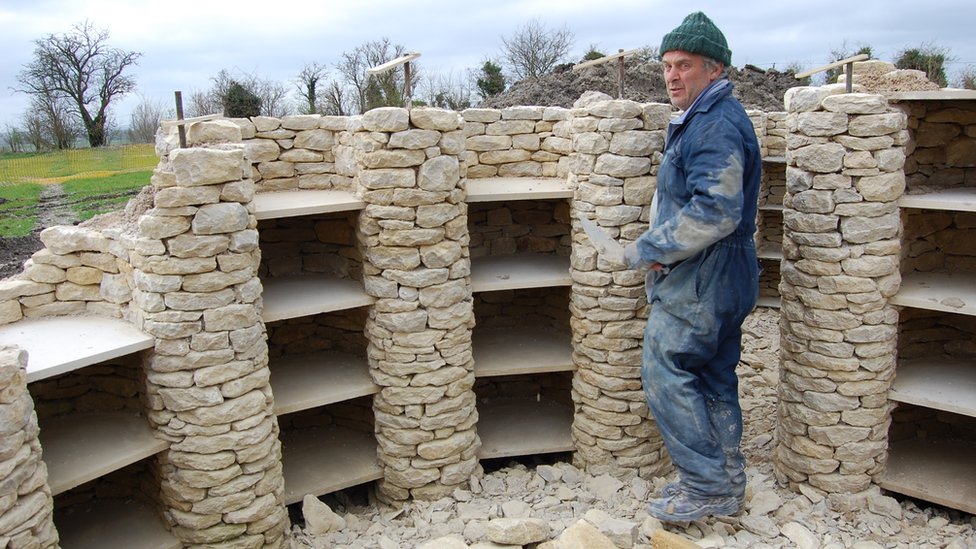 "I'm trying to build it in a way [the Neolithic people] could have done it in their time."

Mr Davies, and his apprentice, are from Bedford and live in a caravan on site while work continues.

"We couldn't pass up on this. It's something special," he continued. 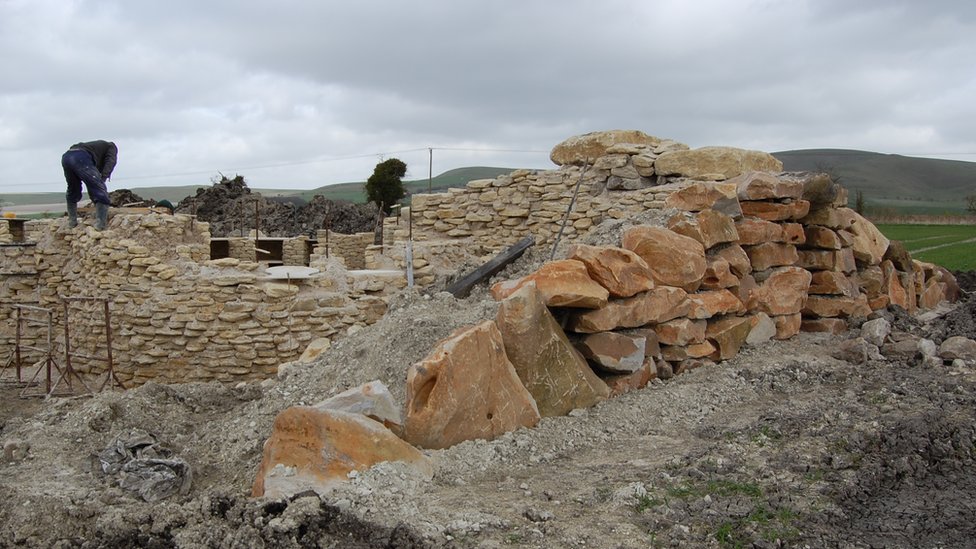 "It's strange really. We haven't built a long barrow for 5,000 years, but then about six weeks ago we had another enquiry for one.

"They want a burial chamber built in central London to hold some art.

"They're like London buses. You don't get one for 5,000 years and then all of a sudden two come at once."

Re: All Cannings is the first long barrow to be built in 5000 years

Sep 21st, 2014
All Cannings, the first Neolithic long barrow burial chamber to be built in Britain for 5,500 years, has finally opened.

The structure, at All Cannings near Devizes in Wiltshire, took almost nine months to build, using traditional materials and stone working techniques.

Wiltshire is a county famous for its Neolithic monuments, which include Stonehenge and the much larger Avebury.

Just like the ancient long barrows, the deceased will spend eternity at All Cannings

Would you fancy spending eternity inside a burial chamber in the corner of a field in Wiltshire?

The first "Neolithic" long barrow to be built in the UK for 5,500 years has been completed and already the first urn of human ashes has been placed inside.

The structure at All Cannings near Devizes took almost nine months to build, using traditional materials and stone working techniques. 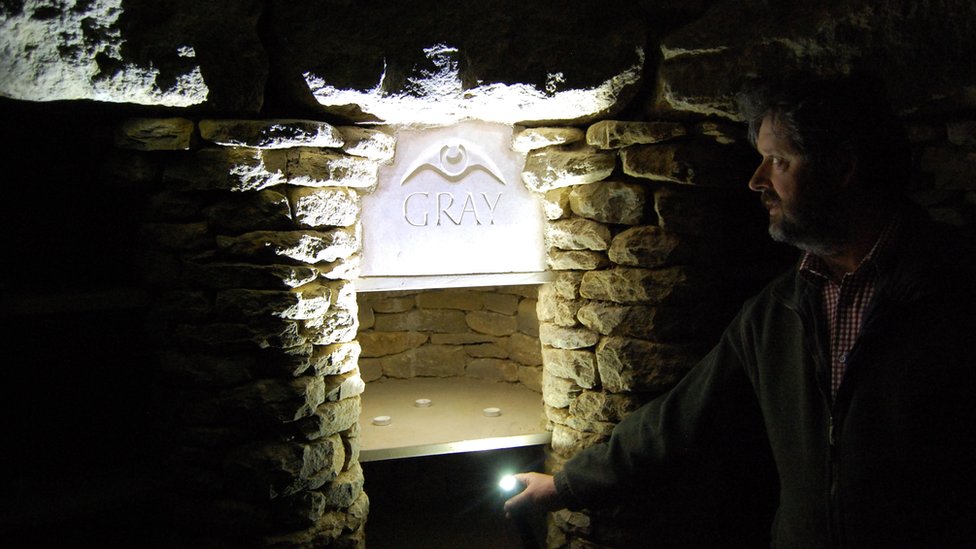 It was privately financed and cost about £200,000 to build, can hold about 1,000 urns and has now opened officially.

The first paying client, Adrian Gray, who interred his wife Carol's ashes in a pewter urn behind a sealing stone in one of the barrow's niches, said it was "amazing".

"I'm so pleased we were able to do this. It's an incredible honour for us to have the first niche, in the first long barrow, for five-and-a-half thousand years. 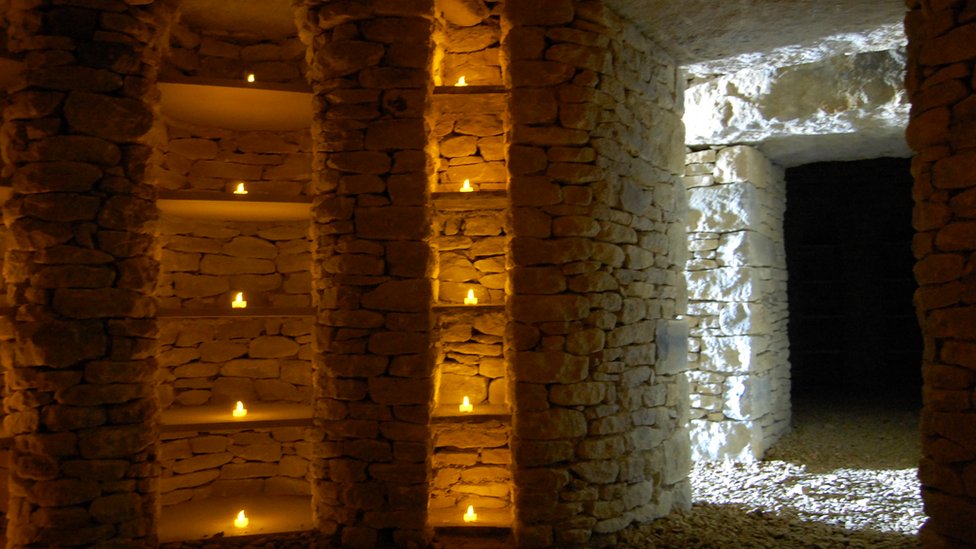 "It's a magnificent chamber. I think my wife would have been very pleased with what we've done."

Mr Gray said the particular niche selected was chosen by a butterfly.

"After my wife passed away I kept seeing butterflies flying into the house and in the wardrobes and on the day we came [to choose the niche] there was a butterfly in this chamber flitting about.

"It flitted towards this niche rather than the other ones, so I chose it on that basis. It's all a bit mad."

Developer Tim Daw said he was "absolutely thrilled" with the way the structure had turned out.

"It's been a lot of work - all hand work. Every stone has been shaped and placed by hand.

"It's not a pastiche or a reconstruction of an ancient long barrow - it's been made more usable but keeping a traditional feel to it." 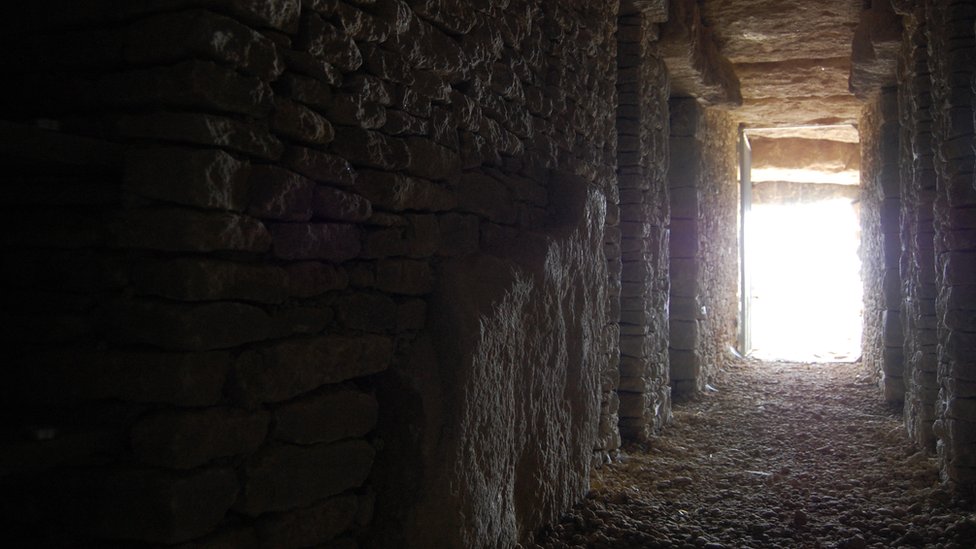 The long barrow contains four large chambers, each housing 55 niches, which are each able to hold four or five urns.

A smaller "secret" chamber is able to house single urns in smaller niches.

Clients are charged about £1,000 for use of a niche. More than 40 have been reserved so far.

Mr Daw said the burial chamber was planned to be much bigger but he "ran out of time and money" to complete it.

"We wanted to get it finished this summer and we've done a far fancier job than we were originally going to do," he said.

The barrow is aligned with the sunrise on the Winter Solstice on 21 December.

"The sun should shine right up the passageway and hit the end. If it doesn't we've got to move the barrow," Mr Daw joked.

What is a long barrow?

Barrows are artificial hills of earth and stones built over the remains of the dead
They were usually reserved for members of the social elite or Anglo-Saxon royalty
Ordinary people were usually cremated or buried in more humble graves
They were first constructed in about 4,000 BC up to the late pre-Christian era
England's most famous barrow is at Sutton Hoo in Suffolk 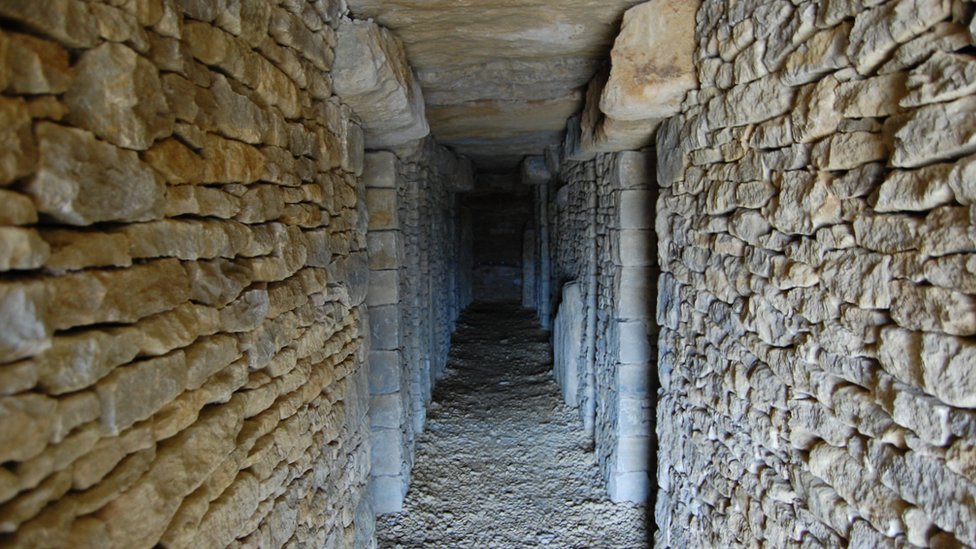 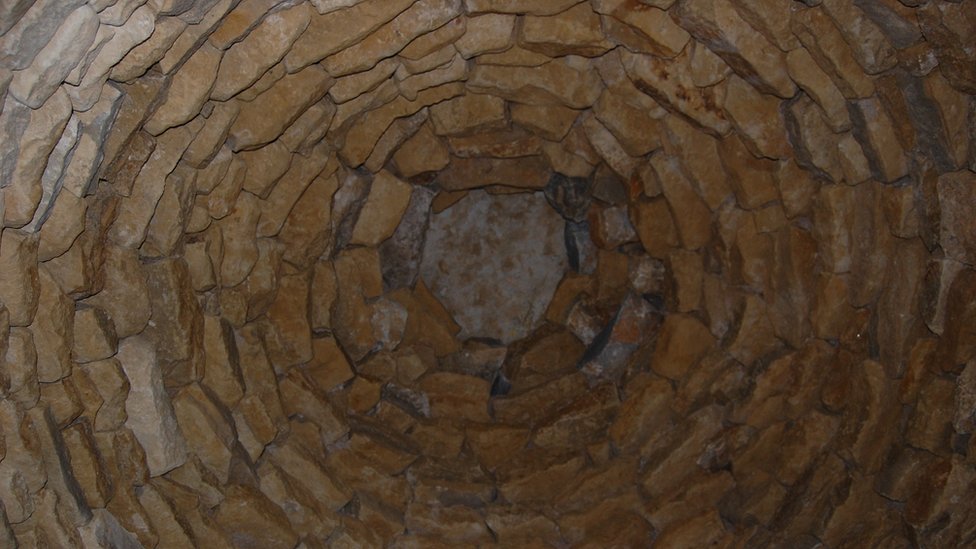