On 21st December 1988, Pan Am Flight 103, flying from London's Heathrow to New York's JFK, was destroyed by a bomb over the small Scottish town of Lockerbie, just a few miles from Scotland's border with England, killing all 243 passengers and 16 crew. As the wreckage of the airliner rained onto, and around, the town, 11 Lockerbie residents, including three children, were also killed. In total, 270 people lost their lives that day, making it Britain's worst-ever terrorist attack.

The plane ploughed into Lockberbie, killing 11 people on the ground.


Relatives of the 270 people killed in the Lockerbie bombing have been marking the 20th anniversary of the tragedy.

Pan Am Flight 103 was blown up over the town on 21 December 1988, claiming the lives of everyone on the plane and 11 local residents on the ground.

A number of "low key" ceremonies are taking place in the town in accordance with the wishes of the community.

A tribute is also planned in the US at the Lockerbie memorial in the Arlington National Cemetery in Washington DC.

Special "places to remember" were opened in Lockerbie, with a wreath-laying ceremony taking place at the Dryfesdale Cemetery.

In the evening there will be services at both the Tundergarth and Dryfesdale Church.

A little after 1900 GMT the exact anniversary of the atrocity will be remembered.

One of the commemorations was held in the Garden of Remembrance, which has been built on the area where the plane came down in Lockerbie.

The US consul in Edinburgh, Lisa Vickers, attended the ceremony.

She said: "There were 180 people that were American citizens on board that flight, 35 of them students at Syracuse University and we still remember very much the events of that night 20 years ago."

Up to 300 people, including relatives and some former employees of the Pan Am airline were attending a private memorial at Heathrow Airport chapel led by the Rev John Mosey, whose daughter Helga died in the disaster.

For many who lived through it, the memories remain fresh despite the time which has passed.

George Stobbs, Lockerbie's police inspector at the time, recalls the events of 20 years ago with great clarity.

"Nobody actually knew what had happened, we realised an aircraft had come down but I thought it was a military aircraft," he said.

"Once I got into Sherwood Crescent I could see flames along the roadside, the footpaths were burst and there were gas pipes fractured - there were dancing flames coming up from them.

"Hedges were on fire, drop pipes on the side of houses were on fire and they were in turn climbing up and setting fire to the roofs."

It was only later in the evening that the scale of the death toll at Lockerbie began to emerge.

The town has moved on in the intervening years, but Mr Kerr said it was right that it should mark a major anniversary. 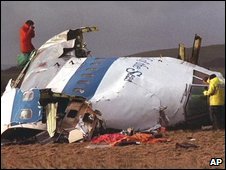 Eyewitness Maxwell Kerr said: "You realise just how lucky we are to have had another 20 years of life."

Paying tribute, First Minister Alex Salmond said: "I know that through the events being organised in Lockerbie, at Syracuse University, and at other locations in the UK and the US, that fitting tribute will be paid to those who so tragically lost their lives and those, in south of Scotland and beyond, whose lives have been affected by the atrocity."

He added "I offer my support to all involved in marking the anniversary and, in particular, my condolences to those who will be mourning the loss of a loved one."

Jim Murphy, Secretary of State for Scotland, said: "Our eternal sympathy goes out to all those who lost family members and friends and who to this day feel the dreadful effects of that terrible event."

Former Libyan intelligence officer Abdelbaset Ali Mohmed Al Megrahi was found guilty of mass murder following a trial at Camp Zeist in the Netherlands in 2001.
Megrahi, who was recently diagnosed with terminal prostate cancer, has consistently denied responsibility for the bombing and a second appeal against his conviction will be heard by the courts next year.

In every life there are a handful of events which go beyond our ability to fully comprehend or believe.

For most people in south west Scotland, the Lockerbie disaster was one such occasion.

The scale of death and destruction which fell from the sky onto a quiet, rural town is still hard to take in.

Such atrocities tend to be the unwanted preserve of major cities around the world - not the agricultural heartland of Dumfries and Galloway.

Pan Am Flight 103 might have come crashing to earth almost anywhere along its route through the skies.


The fact that it struck Lockerbie has given the place the kind of fame it would have happily lived without.

Prior to 21 December 1988 it was just another proud farming town near the border between Scotland and England.

It was best known, perhaps, for its ice rink and a railway station linking the region to Edinburgh.

Since the events of that night 20 years ago, it has become known worldwide as the place where a Pan Am jet plunged out of the sky killing a total of 270 people.

It is a notoriety which the Dumfries and Galloway town has slowly come to terms with over the two decades since the disaster which scarred it deeply.

Initially, the area was a scene of devastation and distress.
A total of 11 people lost their lives on the ground, with wreckage strewn widely through the town and beyond.


However, due to the nature of the disaster, its effect quickly spread way beyond south west Scotland.

Passengers on Pan Am Flight 103 came from around the world.

As investigations continued, two Libyans went on trial for murder. One of them was convicted and the other was found not guilty.

The proceedings took place at a special Scottish court in the Netherlands.

It all seemed a long way removed from the town where the plane crashed.
A high profile appeal by the man convicted of the Lockerbie bombing has gathered little coverage in the local media and provokes little interest in the area.

Lockerbie became known worldwide after the events of 1988


Residents seem to have left the distant wheels of justice to run their course.

Little wonder, perhaps, that the theme of events in Lockerbie this Sunday is "low key" - in line with the wishes of the local community.

A number of "Places to Remember" will be open throughout the day, including the Dryfesdale Lodge Visitors' Centre, Lockerbie Town Hall and Tundergarth Church.

A commemorative wreath-laying will also take place at the Dryfesdale cemetery, and there will be services at Dryfesdale and Tundergarth Churches.

No doubt the eyes of the world - and a massive media presence - will be concentrated on the town again.
It is something which Lockerbie residents have come to accept. Then, when the attention has faded, they will surely return to the process which has occupied the past 20 years - getting on with their lives.