Rugby union World Champions England slaughtered the Barbarians (a World XV side) today. It will give them confidence going into their games against Australia in Sydney and Melbourne.


Barbarians fall at Twickenham
Sunday May 28 2006

England kicked off their end-of-season activities with a fine 46-19 victory over the Barbarians at Twickenham on Sunday, recovering from a very shaky start to run six tries past the star-studded invitational side. 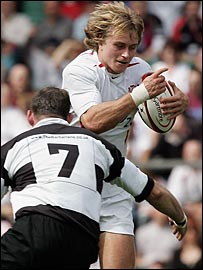 Bath fly-half Olly Barkley inspired the winning send-off as the world champions prepare to face Australia in Sydney and Melbourne next month.

England head south on Sunday night, and coach Andy Robinson will be relieved to have emerged from the annual Gartmore Challenge match at Twickenham without any major injury problems and a first win over the Baa-baas since 2002.

Barkley scored 21 points, including a try, and there were also touchdowns for James Simpson-Daniel (2), James Forrester, prop David Barnes and his fellow substitute Delon Armitage.

At times though, the game resembled little more than a practice match, and it was difficult to imagine Robinson and his new-look coaching team of Brian Ashton, John Wells and Mike Ford learning a great deal.

Barkley, Simpson-Daniel and skipper Pat Sanderson were the pick of an efficient, if unspectacular England side, and Australia will provide an infinitely tougher challenge at Sydney's Telstra Stadium on June 11, then Melbourne six days later.

England made a bright start, off-loading well in contact before Barkley kicked them ahead through a 38-metre penalty after opposite number Carlos Spencer was denied an interception try for offside.

It was a harsh call by Irish referee Donal Courtney - and Spencer's wry grin suggested he felt England had fortuitously escaped - before Barkley doubled the lead with a second penalty.

Unlike England, the Baa-baas sacrificed a penalty chance in favour of an attacking scrum, and such adventure almost reaped its reward when Joe Roff was sent clear, but opposite number Simpson-Daniel produced a superb try-saving tackle.

England's defensive organisation came under threat from the Baa-baas' dazzling runners, and centre Mathew Tait emulated Simpson-Daniel's heroics when he hauled down his Newcastle colleague Burke and prevented a certain score.

Predictably, England proved more structured and deliberate in attack than their opponents, but an opening quarter high on endeavour finished try-less.

The Baa-baas looked poised to score after slick approach work created a two-man overlap, yet Reihana's pass was intercepted by Simpson-Daniel, who raced 80 metres unopposed for a gift try.

Barkley's conversion made it 13-0, although any hint of English complacency was immediately removed when Tait fumbled in defence and Magne capitalised by strolling over for his team's opening try, converted by Burke.

There was little pattern to the game, which suited the Barbarians far more than England, and Sanderson saw his team fall behind through a score that will have concerned defence coach Ford.

England were blown open in midfield by flanker Toutai Kefu's charge, leaving Burke with a simple task of sending Reihana sprinting over, with the conversion completing the wiping out a 13-point deficit during six damaging minutes.

England needed to regroup, yet the Barbarians were in mood to relent, and a wonderfully ghosting Spencer run had the hosts in all sorts of trouble. Lock Alex Brown snuffed out the danger by dragging Spencer down.

The Baa-baas had their opponents on the ropes, but the game's unpredictable nature meant another expected turn as Tait broke out of defence, scrum-half Peter Richards kept the move going and Simpson-Daniel stepped neatly inside two attempted tackles for his second try to edge England 18-14 ahead at half-time.

Robinson resisted any temptation to make half-time changes, and a promising England opening almost produced tries for Simpson-Daniel and Balshaw, with Balshaw called back following a forward pass from Tait.

Barbarians coach Bob Dwyer though, began utilising his replacements' bench, with scrum-half Justin Marshall and prop Peter Bracken both given run-outs, and England fell behind again on 53 minutes.

Although the Australian could not convert, the Baa-baas led 19-18, which was a cue for Robinson to make four switches, taking off centre Mike Catt, prop Tim Payne, hooker Lee Mears and lock James Hudson and sending on Stuart Abbott, Barnes, David Paice and Kieran Roche.

Barkley then gathered Spencer's speculative kick out of defence, racing 30 metres for a try which he converted, making it 25-19, and England ran pulled away during the closing quarter, scoring 21 further unanswered points to give them a record winning margin for the fixture.