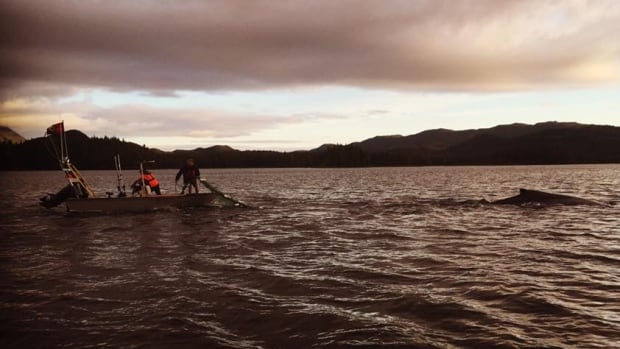 A group of people helped free a humpback whale off B.C.'s Central Coast that had become entangled in fishing nets and other equipment  but Fisheries and Oceans Canada say it would have preferred if its teams could have performed the rescue instead, especially because there may still be netting attached to the animal.

Ingmar Lee of Denny Island, off the coast from Bella Bella, said he headed out onto the water Tuesday after he heard through the marine distress channel that there was an entangled whale in the area.

"We found the whale swimming along slowly at about three knots, towing about 100 feet of fishing line and ropes  and fishing net," Lee said

Lee said he and a friend attached their boats to the fishing net so that the whale could tow their boats and become tired out.

They then cut off as much netting as they could so that the whale could swim.

"We got all the net off and there was a few ropes that were still sunk into the flesh at the very base of the tail and spine area, and we just decided that that was the best that was going to happen," he said.

"We cut the whale loose and then it immediately picked up speed and started swimming."

He said he initially hadn't intended to rescue the whale  he said he headed out onto the water to help locate the whale for Fisheries and Oceans Canada, who are the authority that respond to all reports of marine mammals that are in distress, injured or dead.

He said that though his radio was dead, friends back on shore had called the DFO so he was surprised that they weren't out on the water when he found the whale.


"We expected to see them out there and they weren't there, so we just took it upon ourselves to get that whale free. The conditions were just perfect."

Lisa Spaven, acting marine mammal coordinator with the DFO, told CBC news she did receive a call from the group about the whale and tried to follow up but wasn't able to reach them.

She said she was happy to hear everyone was safe but was concerned when she heard reports there may have been fishing gear still left on the animal.

Spaven said the DFO has a marine mammal response network that responds to different incidents along the coast and said that if there is an entanglement a team would be sent out to assess the situation.

"There are some people trained in the Bella Bella area in  how to do a first response. They would have attended the scene, checked out the whale, [and] acquired some underwater video perhaps to document how the animal is entangled," she said.

"We really need to plan, because you don't want to be making a lot of cuts or spending a really long time with this animal or causing it more stress. So doing that initial assessment and determining where best to cut and how to do it quickly  and making sure everything is off when you're done  is really important."

Netting may still be attached to whale

She said a satellite tag would then be attached so the animal could be tracked. Since there is only one person in B.C. who is authorized to cut equipment off of a whale, she said the tag allows time for them to get to the scene.

The DFO is now asking for anyone to report any sightings of the whale, because its officers have received varying accounts from people about whether or not the animal still has fishing equipment attached, Spaven said.

"Because most of the trailing gear has been cut off, it's going to be really challenging for anyone to confirm that's the animal that we're looking for," she said, adding that rope left on a juvenile whale could grow into the animal.

"The other issue is that because there isn't any trailing gear any longer, attaching a satellite tag is going to be particularly difficult, if not impossible."