The adverse side-effects of the growing dominance of English

And the uninflected Germanic language of England is also the most widespread, being the official language of 53 nations, most of them former British colonies, and only Chinese Mandarin is spoken by most people.

Throughout Europe, English is still on the rise, with a dramatic increase in English-language websites, for example.

But Anglophones may not be about to start dominating Europe. There are several main reasons for this. One of them is the relative ignorance and lack of interest by the British of Continental Europe - only 5% of Spiegel Internationals readers are from Britain (though half are from English-speaking North America). In recent years, British newspapers have withdrawn staff reporters right across Europe, and not only to save money. The British are less and less interested in European politics and policy.

The adverse side-effects of the growing dominance of English 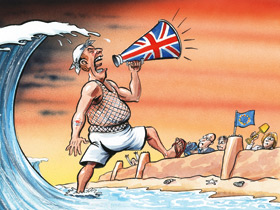 LAST summer, on the Atlantic coast of France, Charlemagne was introduced to a fine beach game: building big sand-walls near the shoreline in the face of a rising tide. It is a more thought-provoking activity than building sandcastles, with a nice melancholic tinge. The walls last a surprisingly long time, resisting the lapping tide with the help of energetic patching and fresh buckets of dry sand. But when they fail, they fail quickly. It takes just two or three big waves to signal doom: once water flows behind the defences, even the thickest ramparts are swift to collapse.

European efforts to resist the rise of the English language have now reached the same point. The latest Anglo-surge comes from the European press, with a dramatic increase in the number of heavyweight publications launching English-language websites, offering translated news stories and opinion pieces.

English-language publications aimed at expatriates and tourists have been common for years. But the new development involves big, established national journals, whose bosses want to be more visible in English. Der Spiegel, a German newsweekly, has founded a pan-European network linking up such websites. A Dutch daily, NRC Handelsblad, joined a few months ago, followed by Politiken from Denmark. The trio are in talks with newspapers in France and Spain. They are eager to expand into eastern Europe, though the credit crunch is likely to slow progress (an online English edition can cost half a million euros a year in translation fees). Beyond this network, a non-exhaustive trawl finds English-language websites of big newspapers in Germany, Italy, Finland, Greece, Spain, Romania, Poland, Bulgaria and Turkey. Many are recent ventures.

Editors motives are a mix of idealism and commercial ambition. Bosses at Spiegel have a political dream to create a platform where Europeans can read what other Europeans think about the world, says Daryl Lindsey, who runs the magazines international edition. But an English presence is also a calling card when pitching to international advertisers. It has proved helpful to journalists seeking interviews with world leaders. Kees Versteegh of NRC Handelsblad talks of creating a European demos, but also admits to frustration at publishing some very fine pieces in Dutch that the rest of the world never notices.

The evidence points to the imminent collapse of the European Unions official language policy, known as mother tongue plus two, in which citizens are encouraged to learn two foreign languages as well as their own (ie, please learn something besides English). Among Europeans born before the second world war, English, French and German are almost equally common. But according to a Eurobarometer survey, 15-to-24-year-olds are five times more likely to speak English as a foreign language than either German or French. Add native speakers to those who have learnt it, and some 60% of young Europeans speak English well or very well.

This is a clear win for English. But paradoxically, it does not amount to a win for Europes native English-speakers. There are several reasons for this. Start with a political one. European politicians long feared that the use of English in the EU would lead to the dominance of Anglo-Saxon thinking. They were wrong. The example of newspapers is instructive: thanks to English (and the internet), a genuinely pan-European space for political debate is being created. It has never been easier for other Europeans to know what Poles think about the credit crunch, Germans about the Middle East or Danes about nuclear power. English is merely an instrument, says Mr Versteegh of NRC Handelsblad, not a surrender to a dominant culture.

There is a second reason why Anglophones are not about to dominate European debate: they do not want to. British readers have access to an unprecedented range of news and ideas from Europe in their mother tongue. They show little interest. Only 5% of Spiegel Internationals readers are from Britain (though half are from North America). In recent years, British newspapers have withdrawn staff reporters right across Europe, and not only to save money. Britains daily newspapers are less and less interested in European politics and policy. Light, sensational stuff is what editors choose for publication, plus tales of British tourists and expatriates in trouble (a genre known as Brits in the sh it).

Such parochialism may be linked to a fall in language-learning, accelerated since 2003, when foreign languages became voluntary in England and Wales for pupils over 14. That robs them of such benefits as the humility and respect for others that come from learning another language. But given the rise of English, it is rational, says Philippe van Parijs, a Belgian academic.

Under his maxi-min rule, Mr van Parijs observes that speakers at EU meetings automatically choose the language that excludes the fewest people in the room.

They do not use the language best known, on average, by those present (which in some meetings will still be French). Instead, they seek the language that is understood, at least minimally, by all. Thanks to EU enlargement to the east (and poor language skills among British and Irish visitors to Brussels), this is almost always English. That means Britons find it ever harder to justify learning other languages. Even when they do, they have to speak other languages extremely well to avoid inflicting halting French, say, on rooms of fluent English-speakers. And it carries other costs. In Brussels, native English-speakers are notoriously hard for colleagues to understand: they talk too fast, or use obscure idioms.

Mr van Parijs has a prediction: Europeans will become bilingual, except for Anglophones, who are becoming monolingual. In other words, just when the British should be happy, some nasty storm clouds are gathering. You could say it sounds rather like a day at the British seaside.