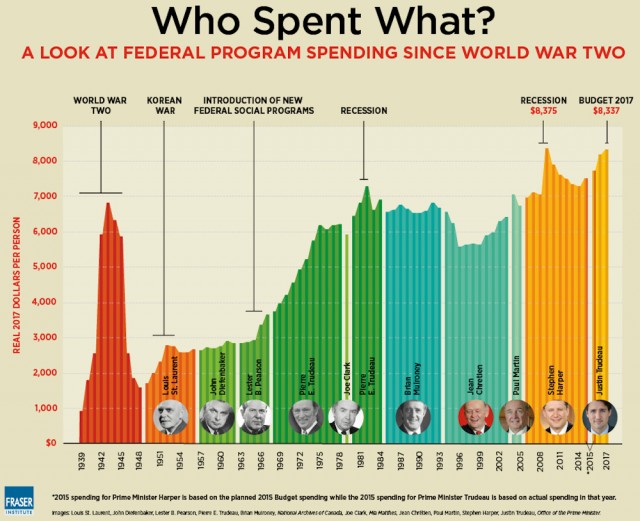 Federal program spending under Prime Minister Justin Trudeau has nearly eclipsed the all-time high recorded during the 2009 recession, finds a new study by the Fraser Institute.

Looking back at government spending in Canada since Confederation, this year stands out because unlike most other spending spikes, theres no recession or war to explain it, said Jason Clemens, executive vice-president of the think-tank and co-author of the report.

The study, which tracks annual per-person program spending since Confederation and is adjusted for inflation, finds that former PM Stephen Harper recorded the highest per-person spending in 2009 at $8,375 (in 2017 dollars).

The think-tank notes that most marked increases in program spending over Canadas history have coincided with wars or recessions. However, Trudeaus spending splurge comes in the absence of either.

Trudeau also has the third largest average annual increase (5.2 per cent) in per-person program spending since the Second World War, behind only Lester B. Pearson (5.3 per cent) and Louis St. Laurent (7.0 per cent).

While wars and recessions obviously affect government spending, the rapid increase in spending observed recently, coupled with deficits and growing debt, can have real negative consequences for Canadians and the economy, Clemens said.

With $300 from Soros and Rockefellers to fight pipelines and Canadian oil and gas, how hard would it be to get a saboteur elected to destroy the CDN economy?

Jul 1st, 2019
Hopefully there is no U.S. interference/disinformation in this election, Russia is minor compared

Hopefully there is no U.S. interference/disinformation in this election, Russia is minor compared

Chances are, they will.

We want Liberals to actually do something.

Why you looking for an early grave ya wackjob.

Why would 'retired' be called 'early'? Do you even know 'whack' is a term in association with death rather than unsound mental health, like this place specializes in thanks to you and the rest of the psychopaths that run the joint.


Think of me as 'the Pot Stirrer'. In the 'Tarrot realm' I would be the death card because before I come and after I leave you will have been changed (died) a little that will snowball down the line. There is no reason for me to tell you that as you will realize it on your a few years from now. At this point in time I hope it is too late for it to do you any good.


Enough about me, you have shown allegiance brings financial rewards but the truck will need lots of your time and most of the money goes to the makers of the machine and other expenses associated with running a business. That business is part of all businesses on a global scale, you are a hired hand, nothing wrong with that. The poor would envy you mist likely. When the truck is sold 5 years down the road and the cycle starts over again. How much time have you spent with your bike? Answer: Not much considering how much it cost.

We want Liberals to actually do something.

JT did just that in his speech in the north. It is the rest of Canada that is ignoring those worlds (on speech and action as not one action has been taken) and prefer the subject be buried deep, along with the Indians he mentioned.
It would seem all Canadians are acting against the PM and that is an act of treason whether you like it or not. Why should people like that have any power in Canada?? (let alone be held up as the most moral people in the world)

Those countries care all run by filthy PROOOOOOOGS!

Countries with ample gun ownership at the top too


to go even ONE SMALL STEP BEYOND GRAND PLANS....


Ontari-owe LIE-berals even told us

Canada's economy is doing better than ever and our debt to GDP ratio is pretty good all things considered.

But yea, we should let the Conservatives give us another technical recession.

Canada's economy is doing better than ever and our debt to GDP ratio is pretty good all things considered.
But yea, we should let the Conservatives give us another technical recession.

Hemer-Hoid, forget your other login ID..

MHz is she related to you?

Hemer-Hoid, forget your other login ID.. 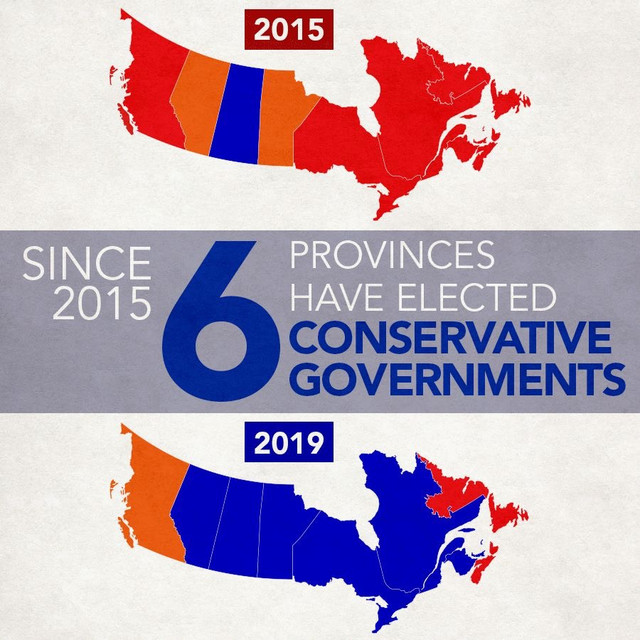 Maybe it is fake if the poster is anti-JT??

You kind of skip along on the surface of 'facts' rather than diving in and going real deep. . . . Right?

Maybe it is fake if the poster is anti-JT??

You kind of skip along on the surface of 'facts' rather than diving in and going real deep. . . . Right?

Harper didn't really have any choice because of what cretin and Martin left him.TrudOWE OTH had absolutely no reason or need to borrow anything.

Jul 7th, 2019
Cretien and Martin left Harper a surplus. and the best economy in the G20.

Jul 7th, 2019
KINSELLA: Andrew Scheer's dimples disappear amid trolls' trite criticism
Warren Kinsella
Published:
July 6, 2019
Updated:
July 6, 2019 1:07 PM EDT
Conservative Leader Andrew Scheer speaks during an editorial board meeting at the Toronto SUN in Toronto, Ont. on Friday October 19, 2018. Dave Abel/Toronto Sun/Postmedia NetworkDave Abel / Dave Abel/Toronto Sun
Dimples.
Thats what you actually get some Trudeau trolls nattering about online: Andrew Scheers dimples.
Seriously.
For some reason beyond the understanding of sane people, the Trudeaupian types think the Conservative Leaders dimples disqualify him as a candidate for prime minister. They go on about it all the time.
The same criticism used to be made about Bill Clinton. The Democratic presidents many Republican antagonists would say Clintons ever-present grin was unsettling. They would say Clinton seems to be smiling when, you know, he shouldnt be.
In recent months, the upward tilt of Andrew Scheers lips havent been as evident. We dont know if hes received advice to look less happy, or if he is simply distressed by the state of Confederation. Either way, Andrew Scheer is not smirking nearly as much as he used to.
This tendency of some people to attack politicians for something over which they have no control  to wit, their physical appearance  is nothing new.
Haters on the left attacked Doug Ford for his weight, just as they did with his deceased brother, Toronto Mayor Rob. Kathleen Wynne was mocked for resembling the Church Lady on Saturday Night Live.
And, as Wynne would certainly know, female politicians are regularly attacked  viciously, ceaselessly, unfairly  for their appearance: their hairstyle, their style of dress, their relative attractiveness. All the time.
Such attacks can change the course of political history. The infamous 1993 Conservative Party ad that pointed out the facial paralysis of my former boss, Jean Chretien, is the most infamous example. On the night those ads hit the airwaves in the midst of the 1993 federal election campaign, this writer was running Chretiens war room at his Ottawa headquarters.
LILLEY: Trudeau pops in latest poll but bottom could be falling out
KINSELLA: Dishonest Trudeau campaign against Scheer must stop
We did not know those attack ads were coming, and we were shocked when they did. Unidentified voices could be heard asking if the Liberal leader looked like a prime minister.
My boss had been waiting his whole life for that attack. He responded a few hours later, at a campaign stop in New Brunswick. He pointed out this was the face that God gave him, and  unlike Tories, he said  I dont speak out of both sides of my mouth.
Boom. Tories reduced to two seats.
In political back rooms, however, a great deal of time is still devoted to discussing and debating the physiology of political candidates. Example: prior to this writer arriving in British Columbia in 1996 to assist the B.C. Liberal campaign, some nameless genius strategist decided to stick BC liberal leader Gordon Campbell in a plaid shirt, so he would look a little more proletarian, and a little less Howe St.
The gambit backfired dramatically. Campbell was ridiculed for trying to be something that he was not.
Prime Minister Justin Trudeau presents a political anomaly. Like Gordon Campbell, he is a handsome fellow. Even Rolling Stone gushed in a cover story that Trudeau and his family are photogenic and glamorous.
In Canada, the politicians who tend to succeed are unlike Trudeau. They are the ones who possess the hockey-rink-and-Timmmies Everyman look. Ralph Klein, Rene Levesque, Mel Lastman, Jean Chretien and Rob Ford were frequently attacked by the elites for being dishevelled or, at least, somewhat less than a Hollywood matinee idol.
But voters, clearly, loved them for it. Because, in the main, not too many voters resemble Hollywood matinee idols either.
If theyve gotten this far, serious students of policy will be offended by all this talk about physical appearance.
Theyre right. We shouldnt make important decisions based on looks.
But, not long after he lost the aforementioned 1996 B.C. election, Gordon Campbell ruefully remarked to this writer: Its 70% how you look, 20% how you say it, and only 10% what you say.
Campbell knows whereof he speaks. And, if you dont believe me, go looking for Andrew Scheers dimples.
Theyre gone.
http://torontosun.com/opinion/column...rite-criticism