She fled to Britain from her native Afghanistan to escape the Taliban and became a British citizen.

Now she wants to win the Miss World competition as her way of saying "thank you" to England for giving her a new life and good education. 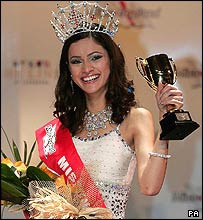 ONE evening this week Miss England, Hammasa Kohistani, sat before the Miss World judges. They asked me where I would be in five years time, she said.

She found it all rather easy because, since being pronounced Miss England, the first Muslim woman to hold the title, she has had to field constant questions from the worlds media.

Never have the pronouncements of Miss England received such attention.

Talking about tonights Miss World final, she said: If I win, I think I will get global coverage. More than any other girl, because they have seen me from the start.

So many people from so many nations have been interested in my progress. Because Im not what was expected.

Miss Kohistani, 18, was brought up in was brought up in Afghanistan as it crumbled into civil war. She remembers nights in Kabul cowering in the corridors when her block came under a hail of bullets and bombs, and how she refused to come out from under her bed sheets for days.

Her family fled the country as the Taleban came to power, and by way of Uzbekistan, Ukraine and Russia, ended up in Middlesex.

While her father set up a takeaway food business and her mother became an interpreter, Miss Kohistani was spotted on the Underground, aged 14, and began modelling for Gap and Superdrug.

Pronounced Miss England on September 3 this year, she took a year out from her A levels at Uxbridge College. This is a real-life fairy story that couldnt happen in any other country, she said.

Then came the media, the questions on religion, the death threats and the fan mail from all over the world.

Two months later she said: I have to have views on politics, religion and everything, not just my favourite movie or colour or dress.

Miss World 2005 is being held on the Chinese island of Hainan. As our plane landed we could see a huge banner, Miss Kohistani said. They are treating us like celebrities. We didnt have to carry our own luggage.

Visitors to the official website were told how at the Miss World Talent Show an audience of nearly 3,000 packed into the Ruian stadium to witness the night of their lives as the Miss World contestants sang, danced and performed their way into the hearts of the people of Ruian.

Miss Kohistani, who arrived as one of the favourites, feels that she has performed quite well, but says she is up against a daunting array of talent. Miss Italy is a national skating champion. Miss Hungary has done stunt work as a street fighter on a motorcycle. Miss Korea can split a plank of wood with her bare feet.

Its getting more nerve-racking now, Miss Kohistani said yesterday. Tonights televised finale will be watched by just under a third of the worlds population. These girls are your friends, Miss Kohistani said. We have breakfast together. In the shows we help each other in and out of dresses. But you have to compete against them. Miss Canada is like an older sister. Miss Botswana mimes hugs and kisses when she performs on stage. And when its all over, Miss Kohistani has promised to show Miss Costa Rica round London.

So where does she see herself in five years time? She answers like a true professional: My photoshoot started ten minutes ago. Im sorry, I dont have time to answer.

RE: The Muslim Miss Engla

SANYA, China  Miss Iceland, Unnur Birna Vilhjalmsdottir, a part-time police officer who wants to be a lawyer, was crowned Miss World 2005 on Friday.