Blackleaf
#1 Jan 1st, 2010
With a height of 443 feet, with 32 sealed egg-shaped passenger capsules (representing the 32 boroughs of London) each weighing 10 tonnes and capable of holding 25 people, the London Eye is Europe's largest ferris wheel (and the largest in the world when constructed in 1999 but is now the third largest in the world being overtaken by one in China and one in Singapore).

The wheel, located on the South Bank of the River Thames in the borough of Lambeth, can also be transformed into the world's largest catherine wheel.

The London Eye has been the focal point of England's New Year celebrations since it welcomed in 2005.

For the New Year display, fireworks are fixed around the London Eye which, when let off, give the impression that the giant ferris wheel is spinning like a humongous catherine wheel. Other rockets are fired from points next to the London Eye and from barges on the Thames.

This New Year around 200,000 lined the freezing, dark waters of the Thames to watch the fabulous display which cost £313,000.

New Year is a huge event in Scotland, where it is called Hogmanay. 80,000 people attended Scotland's largest New Year event in its capital Edinburgh to watch fireworks let off from Edinburgh castle.

There are 38 timezones around the world. Britain was in the 24th timezone to welcome in the New Year, along with Portugal, Morocco, Guinea Bissau, Ghana and Gambia. Most of Continental Europe saw in the New Year an hour before Britain.

Kiribati was the first place in the world to see in the New Year and the last were Samoa, American Samoa and Niue. 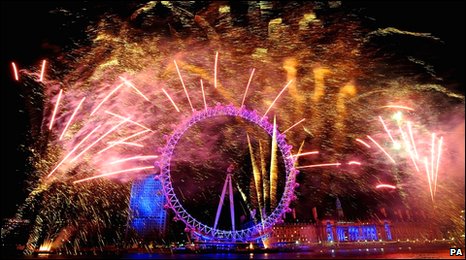 More than 200,000 people lined the Thames in London to watch a firework display to welcome in the new year.

Clear skies gave the crowds a perfect view of the seven-and-a-half minute display above the London Eye.

But Deputy Mayor of London Richard Barnes, who was in charge of the fireworks, said people were still getting a "good bang for your buck".

New Year celebrations on the Embankment in London

He said the major cost of the event was ensuring the safety of the crowd and organising travel arrangements so they can get home.

The Tube, DLR and buses allowed people to travel for free until 0430 GMT, but revellers still had to pay for using most mainline train services. 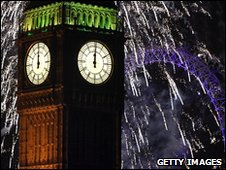 
Most rail operators said they were unable to offer free travel on New Year's Eve following the withdrawal of £100,000 in tax subsidies by the current mayor, Boris Johnson.

Night buses were to run as usual while some National Rail services from London were to continue throughout the night.

Speaking ahead of the event, Mayor of London Boris Johnson said: "I know for many people in London 2009 has been a very tough year, but there are signs of optimism everywhere.

"I hope that people will celebrate all the hard work they've put into 2009."

He added: "London is the greatest place to have a party any day of the year."

Radio 1 DJ Nihal provided a soundtrack to the party at the London Eye, while a host of other DJs and pop stars were to perform at pubs and clubs across London.

Many flocked to viewpoints such as Primrose Hill in Camden, north London, where private displays competed with fireworks visible from central London.

Among the acts appearing elsewhere in London were Calvin Harris at the O2 Arena, Boy George at the Leicester Square Theatre Basement and Judge Jules at the Ministry of Sound.

A policeman gets a Hogmanay kiss in Edinburgh, where up to 80,000 people saw in the New Year in temperatures of minus 4C

Those arrested were held for various offences including being drunk and disorderly, assault, public order offences, possession of drugs and sexual offences.

Two people were rescued from the Thames in separate incidents by officers from the Met's Marine Support Unit and the RNLI.

They were both taken by ambulance to hospital where their conditions were said to be non life-threatening.

On Friday, 400,000 are expected to watch the New Year's Day Parade, which will set off from the Ritz Hotel at noon and end in Parliament Square.

Interesting things you never knew about the London Eye

A VIEW FIT FOR A QUEEN

The London Eye welcomes an average of 3.5 million customers every year. You would need 6,680 fully booked British Airways Boeing 747-400 jumbo jets to move that number of fliers!

Each rotation takes about 30 minutes, meaning a capsule travels at a stately 26cm per second, or 0.9km (0.6 miles) per hour - twice as fast as a tortoise sprinting; allowing passengers to step on and off without the wheel having to stop

THE ONLY WAY IS UP

The circumference of the wheel is 424m (1.392ft) - meaning that if it were unravelled, it would be 1.75 times longer than the UK's tallest building - One Canada Square in Canary Wharf

UP, UP AND AWAY

The height of the London Eye is 135m (equivalent to 64 red telephone boxes piled on top of each other) making it the fourth tallest structure in London after the BT Tower, Tower 42 and One Canada Square in Canary Wharf

The spindle holds the wheel structure and the hub rotates it around the spindle. At 23 metres tall, the spindle is around the size of a church spire and, together with the hub, weighs in at 330 tonnes: over 20 times heavier than Big Ben