Blackleaf
#1 Aug 27th, 2006
The Notting Hill Carnival is the largest in Europe and the second-largest in the world after the Rio Carnival.

Final preparations for the 42nd Notting Hill Carnival were under way in west London last night.

Among those putting the finishing touches to the colourful displays which have become a feature of the event was Sadeysa Greenaway-Bailey, 17, a student of art and design at Kingston College.

Billed as Europe's biggest street party, up to two million people are expected to descend on the area today and tomorrow for the celebration of West Indian culture which this year carries the theme "Aspiring and Achieving in Unity".

As last-minute alterations were being made to an array of costumes and floats, several tons of music equipment were brought into the area while some homes and businesses were being boarded up.

In previous years, the carnival has been marred by violence and vandalism. But last month police launched an operation to target individuals they suspected would use the weekend to commit crime.

By last night, officers had made at least 93 arrests for offences ranging from supplying class A drugs to robbery and money laundering. Officers seized loaded firearms, in one raid more than 12lb of cannabis, plus £15,000 cash and £100,000 worth of stolen goods.

Supt Michael Wise, who is in charge of policing operations, said: "This four-week operation has been about tackling gangs who intend to use the carnival as a 'target rich' environment."

More than 10,000 officers will be on duty but police urge people to leave jewellery at home and not to carry too much cash or credit cards.


Labroke Grove is the heart of the spectacular Notting Hill Carnival, held each August Bank Holiday since 1966. This holiday always falls on the last weekend of August with Sunday and Monday being the major carnival days. The festivities started as a local affair set up by the West Indian immigrants of the area and has become a full-blooded Caribbean carnival, attracting millions of people from all around the world. There are scores of massive sound systems, many spectacular floats and steel drum bands additionally, to keep you well fed, there are hundreds of stalls lining the streets of the area selling all sorts of food and drink including Caribbean specialities.

The Notting Hill Carnival has been taking place in London, on the last weekend in August, since 1966.
The arrival of Trinidadians in Great Britain, remembering their great Carnivals back home, provided the spark which ignited Notting Hill Carnival. From a small procession through the streets with just a few people in costume and carrying steel drums in the 1960s, has evolved a huge multi-cultural arts festival, attended by up to two million people. It is a great tourist attraction that brings life to London during the month of August.

DISCIPLINES OF CARNIVAL
The five disciplines of Carnival are: Mas from (costume, Masquerade), Steelband, Calypso (political, social and satirical commentary, set to music), Soca (the traditional music of Carnival, a fusion of Soul and Calypso) and Static Sound Systems all play their part on the two days of Carnival-on-the-Road, creating what is the climax to a month of pre-Carnival activities such as dances, sound and soca jams, costume galas, steel band competitions, etc.

In recent years the Notting Hill Carnival has grown and grown, reflecting the multicultural nature of our society, with groups participating from Afghanistan, Kurdistan, Bangladesh, the Philippines, Bulgaria, Russia, Brazil and many other places as well as from all parts of the Caribbean, Africa, Central and South America and the United Kingdom. Notting Hill Carnival operates an all inclusive policy encouraging artists to celebrate their cultural traditions through art, dance and music media with which they feel most comfortable.

In addition to the procession of costumes, soca and steel bands, which wend their way over a route of some three miles, the area plays host to 45 licensed Static Sound Systems, each playing their own selection of soca, reggae, jazz, soul, hip-hop and funk music, house, garage. This is the aspect of Carnival that appeals to the youths and is evolving at an unpredictable pace with innovative styles and forms of music.

There are hundreds of licensed street stalls selling exotic foods from all corners of the globe as well as arts and crafts. Carnival aims to celebrate the cultural heritage of its founders and at the same time be open enough to take on board evolving contemporary culture with its multiracial, multicultural trends.

CONTEMPORARY CARNIVAL
In addition to the traditional aspects of Carnival, there are also three live stages within the Carnival area, featuring local bands, top international artistes, and music from all around the world. These stages play from 12 noon to 7pm on both of the two days. Artistes that have appeared at these stages have included Eddie Grant, the Mighty Sparrow, Arrow, Freddie MeGregor, Burning Spear, Jamiroquai, Wyclef Jean, Amaponda, Courtney Pine amongst others.

THE NOTTING HILL CARNIVAL is the largest arts festival in Europe and in Carnival terms is second only to Rio. Its fantastic, its vibrant, its full of life, its for everyone and it is FREE! DONT MISS IT!


Build up to Carnival

Notting Hill is battening down the hatches in preparation for Carnival  somewhere a small forest is being turned into 8 ft high boards just to protect our communal gardens and posh shop fronts. However, the amount of boards I see with gaping holes and chipped sidings suggest that these have been out to play around here a fair few times already.

Notting Hill in the week pre Carnival resembles an area preparing for a riot. There is an air of excitement and resigned inevitability in the air, as crash barriers get stacked alongside the pavements, weird markings appear on the road and shops put up their have a nice Carnival, see you on late on Tuesday signs.

Back in the days long lost in the midst of stray feathers and old chicken bones, the Carnival was a small affair and the procession could head up the narrow Portobello Road. There was no need to safeguard everywhere you turn into a fortress. But times they have a changed and nowadays everyone with a building, garden or small shed to protect plays safe.

The build up to Carnival also builds up the feeling of camaraderie with fellow residents. There is an air of were in this together spirit as everyone stocks up from Tesco Metro down Portobello. Whether you plan to embrace Carnival or barricade yourself in for the entire weekend, there is no escaping the festivities if you live here, unless you have already gone to queue for your plane at Heathrow.

Aug 27th, 2006
2 million people is a pretty optomistic estimate considering growth has been stagnant for the past 3 years.

Aug 27th, 2006
What Caribbean communities should push for instead of massive street parties and festivals or parades is family weeks. They could have seminars on supporting strong relationships and building strong communities and valuing education for their kids. This is where attention is needed. They don't need another party.

The theme at this year's Notting Hill Carnival was unity and more than half a million people descended onto the streets of west London to revel in each others' diversity.

Bank Holiday Monday in Notting Hill is traditionally the busier of the two days and the streets were filled with crowds dancing to the sound systems and watching the scores of Mas Bands, steel bands and floats making their way around the parade route in west London.

In contrast to 30 years ago, when the 1976 carnival was marred by rioting, race relations appeared to be quite different.

People of different races mixed with each other enjoying the festivities and police said the event had been relatively trouble free.

Officers mixed freely with revellers, pointing disoriented members of the public in the right direction while dancing to the infectious Caribbean rhythms.

Scores of stalls selling everything from homemade jerk chicken and curried goat to West Indian flags and Jamaican beer were busy serving the needs of the hungry and thirsty crowds.

Young and old tucked in to the Caribbean fare, danced to the sweet soca sounds emanating from the sound systems and enjoyed the colourful costumes.

Pauline Webb, 79, of Wembley, said: "I have come here every year for the last 29 years. I like the celebrations and the fact that we're all here to celebrate everyone's cultures.

"I came yesterday and thought it was a bit quiet but it seems busier today. My favourite bit so far has been the Samba band who were fantastic."

Dean Fierheller, 41, of Braintree, Essex, was visiting the carnival for the first time.

He said: "It's great, the atmosphere is great. The costumes look great. I've not had any food yet. We've got a great spot so I'm going to stay here and watch everything. I don't know how long it's going to go on for or how long we'll end up staying." 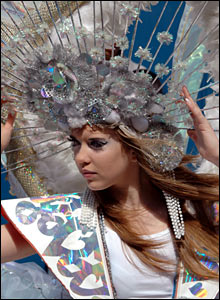 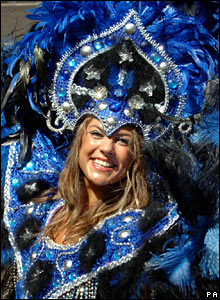 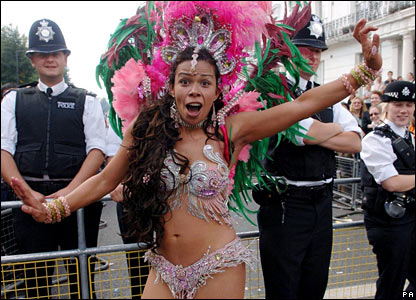 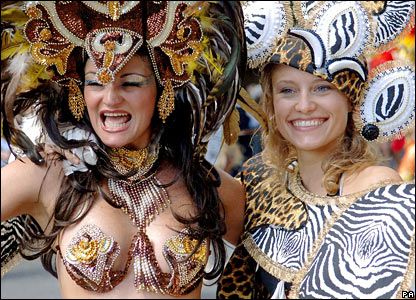 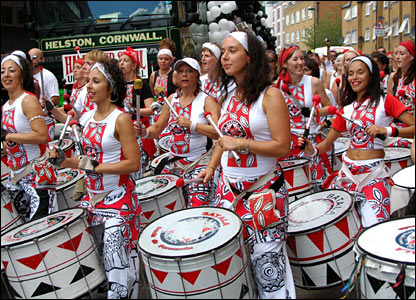 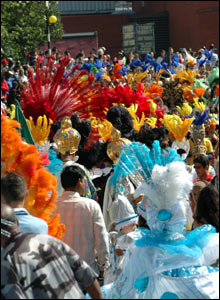 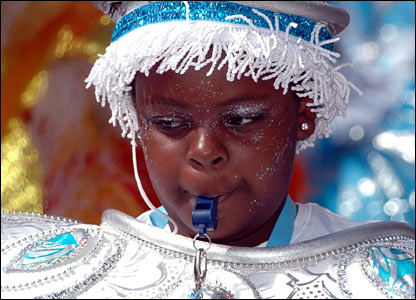 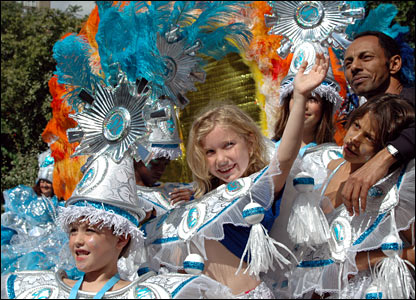 The carnival attracts the old and young alike 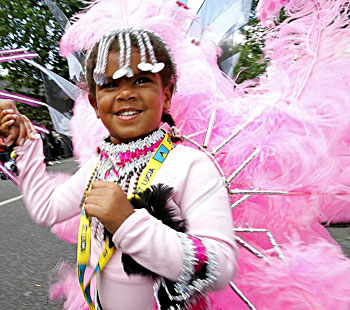 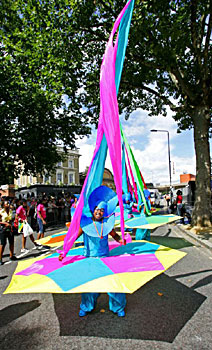 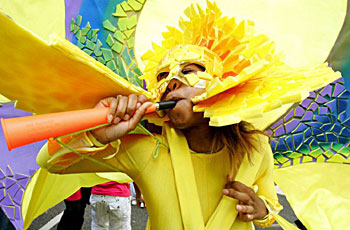 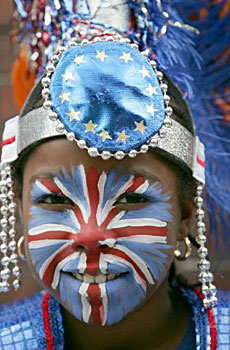 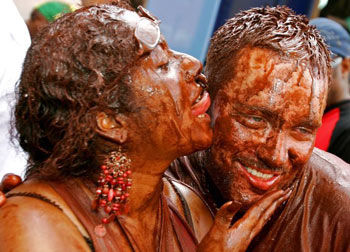 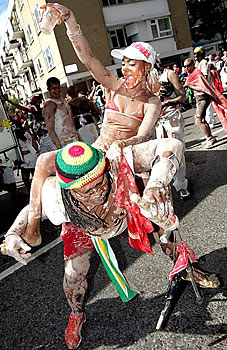 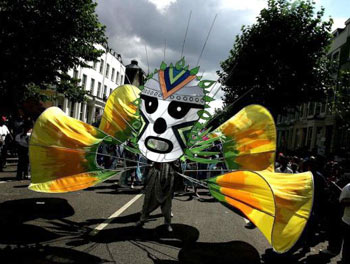 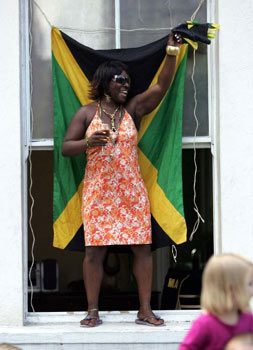 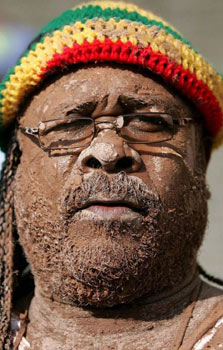 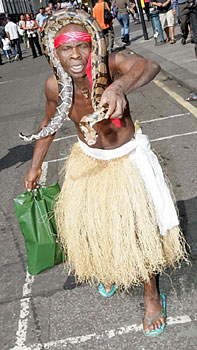 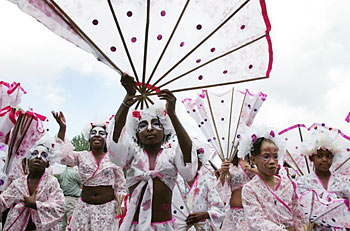 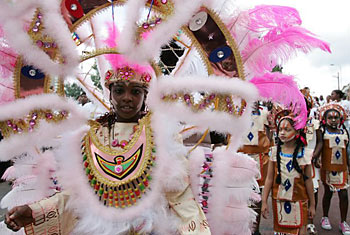 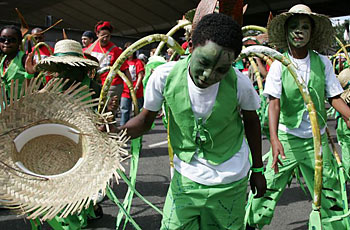 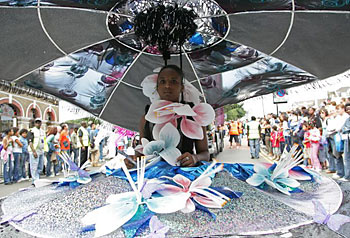