England scrape a draw in First Test against South Africa

Blackleaf
#1 Dec 20th, 2009
England have shown great character after battling to a well-earned draw against South Africa in sweltering Pretoria.

In the Second Innings, South Africa were on 301-7, when they decided that their lead of 363 was good enough and so they therefore declared, putting England in to bat. This was towards the end of the Fourth Day of five.

England needed 364, and South Africa needed all the 10 England wickets, to win with just a day and a bit remaining.

But throughout all of today's play, England kept steadily scoring runs, knowing their best chance would be to hold out for the draw. At that's what they did. At the end of today's play - the final day of the match - England had scored 228, not enough for victory. But it was a nailbiting finish - South Africa had taken 9 England wickets, needing just one more for victory. They didn't get it, meaning the match finished as a draw, leaving England the happier of the two sides.

The BBC
By Jamie Lillywhite


England survived a dramatic collapse to salvage a draw in a thrilling finish to the first Test against South Africa.

The tourists resumed on 11-1 needing a distant 364 but two wickets fell in the first 13 overs before Kevin Pietersen and Jonathan Trott calmly shared 145.

But Pietersen (81) inexplicably called for a run and Trott stood his ground.

Trott made 69 before debutant Friedel de Wet struck three times as five fell for 13 but Graham Onions kept out the final over as England closed on 228-9.

Having slumped to 27-3, the fourth-wicket partnership left all results still possible at the tea interval, with 195 needed from the remaining 35 overs.

Even after Pietersen's needless dismissal, Trott's resolute fifty, to add to his century on his debut in the final Ashes Test last summer, looked to have guided England to a comfortable draw.

The South Africans took the second new ball at the start of the final hour almost as a token final gamble, but 29-year-old De Wet, regularly bowling in excess of 90mph, captured 3-2 in four overs.

Slow left-armer Paul Harris took the eighth wicket when Stuart Broad was cle
arly caught behind, a decision upheld after a replay borne out of sheer desperation, and there were 44 balls of the match remaining. 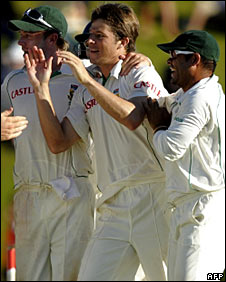 Hero of the first innings Graeme Swann was then trapped plumb lbw by Morne Morkel, the final referral used out of even greater despair and quickly rejected, leaving three overs and one ball for last man Onions to survive with county colleague Collingwood, who made 26 from 99 balls.

The final over was given to Makhaya Ntini, in his 100th Test, but Onions defended resolutely, keeping out one that crept low and would have defeated many a top order player, and England escaped to ensure the series heads to Durban for the Boxing Day Test with the series still 0-0.

Pietersen had produced a masterful innings and looked set for his third century in only five Tests against the South Africans.

Never one to be dictated to, he brought up the 50 in the 27th over with a crunching cover drive for four.

He had one notable moment of anxiety on 39 when he was knocked off his feet by one that kept low from Morkel and the ball would have knocked out middle stump, but umpire Steve Davis correctly spotted a no-ball and South Africa captain Graeme Smith incorrectly thought he could refer the decision.

Pietersen duly flicked the next ball for four and quickly advanced to his 16th Test fifty, which came from just 76 deliveries.

His partner Trott was less flamboyant, as the vast majority of batsmen are, but played a pivotal role nonetheless.

Such was the dominance of England's South African-born pair that Smith called on Jacques Kallis to send down three experimental overs despite not being fully fit following a rib injury.

There were few alarms until Pietersen pushed a single without even looking at his startled partner and arrived at the non-striker's end whilst Trott was still bellowing a refusal of the run.

Bowler De Wet simply gathered the ball and took off the bails in mid-stride and suddenly it looked a different game.

"What a terrific last session - well bowled De Wet, good old Colly (anyone who wanted him dropped after the Ashes series , hang your heads ) and Onions is the new Monty- don't we all love this game?"

New batsman Collingwood soon edged just short of second slip as the South Africans attempted to crank up the pressure and sneak an unlikely win in the closing overs.

Trott remained admirably calm, however, to guide his team to the final hour, but the South Africans took one last gamble with the second new ball and once again the harder seam of a shiny Kookaburra produced results.

A brutal delivery from De Wet rose up and caught Trott on the thumb, with AB de Villiers taking a stunning low one-handed catch to his left at third slip.

That brought in Ian Bell, well aware of the need to justify his selection after the embarrassment of his first innings dismissal when he left a straight ball.

He could only edge another impressive De Wet delivery and Mark Boucher took an outstanding low catch.

When Matt Prior fell in similar fashion it looked as though England were heading for another of their ignominious defeats, but they were indebted once again to the fighting qualities of Collingwood.

He had shielded Onions expertly, but looking for a single to retain the strike off the final ball of the penultimate over he timed it too well and it trickled for four, although his partner showed admirable composure as the final-wicket pair did Durham and England proud.

Dec 20th, 2009
Isn't there a british site somewhere where you can post this drivel?

He actually posts these on many canadian websites and I'm not sure why,think he works for British tourism.

Nothing against the guy but why he blankets Canadian forums with this is beyond me.

Isn't there a british site somewhere where you can post this drivel?

Type in "great briton blackleaf forum" into a search bar and you will see that he posts on dozens of forums,banned from lots of them.

By some deplorable coincidence it is also the definition of a silly game, played by immature loosers, and followed by untalented mob, who could not play the game if their lives depended on it.

So the bottom line is: who gives a s*it?

Dec 21st, 2009
When I was a boy on the prairie, we used to play a game called can-can - not the music or dance but a vaguely cricket-like game. Mind you we never stopped for pinky-raising high tea or ate crustless cucumber sandwiches.

Type in "great briton blackleaf forum" into a search bar and you will see that he posts on dozens of forums,banned from lots of them.

its true lol, i seen it

its true lol, i seen it

He must work for British tourism or something.