Mar 25th, 2014
The cleaning up of the embarassing parts is well under way. All the thugs that don't want to get shot get nice uniforms and new weepons, haircuts shaves, respectableized to assume the responsible work of the coup helping the IMF re hahaaha re hah build the country.

The cleaning up of the embarassing parts is well under way. All the thugs that don't want to get shot get nice uniforms and new weepons, haircuts shaves, respectableized to assume the responsible work of the coup helping the IMF re hahaaha re hah build the country. 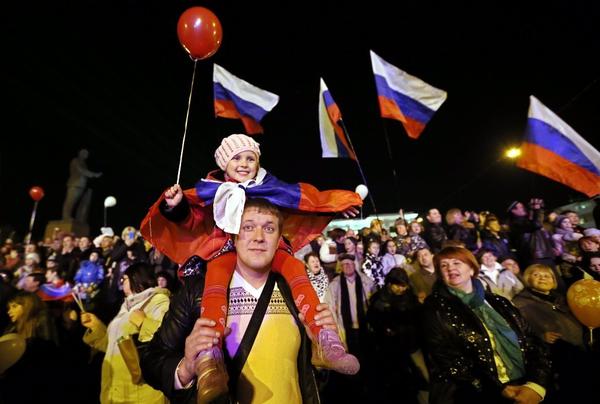 Congratulations to the people of Crimea!!! At least they have the balls of their convictions, unlike the Quebecois that like to cry a good song... but obviously have no balls..

Maybe they need the French military to invade first..

Mar 26th, 2014
The French military has never been the same since the white flag factory burned down

Maybe they need the French military to invade first..

You mean like come to the rescue like they are doing in Mali? That would have the standard operating procedure. Mind you the first ones killed in Mali is the 'spy' they sent in to get captured and then hold out until a certain time and then 'spill the beans' and that would bring in a bunch of the 'brass' and suddenly the place suffers a devastation air-raid and the 'rescue' of the 'spy' sees him getting killed just in case he did break.

Western Ukraine will have the 10% (or less) that will enjoy a life of luxury just like everyplace the west controls. It should take the same form as happened in Iran in 1953. The Secret Police (Nazi SS trained via the 'new and improved' CIA) would be the private contractors that bypass the 'military there ' just like is does in Iraq and Afghanistan today and Iran after the coup in 1953. The next phase will be interesting as Eastern Ukraine is the piece that is not yet claimed. The West has Kiev and west and the standard model will take place. They may have NG but that won't be developed as they would have food and energy. The energy giant for the area has already been chosen and it isn't the Ukraine. Russia could offer the Ukraine free NG because of the weather but deny it to industry in retaliation to electricity being cut off. (installed by the west as the 'gift for letting them get the 'contracts') and the elite see the gains and the rest see no gains and a drop in the standards of living actually happens. (just like Iran in 1953 and a list follows that if you look for a pattern since then to now, insert usual list)

Crimea should develop like Iran (and the whole list) after 1979 without the sanctions and the war with Iraq. Crimea would be a port rather than being industrial as would be the eastern Ukraine. However Crimea and Russia proper would make a decent refugee camp if any citizens felt they were in danger and upon entering the 'protected areas' they would give their video testimony in order to get admittance and those recordings all get verified and with all the other similar items when it hits the ICC their lives are not in danger because killing them won't stop their testimony. The buck would stop someplace and the fines for just being a busy body should be large enough that it eliminates temptation for 100 years or so. What gets done with the money will tell if things change or not and the best way to implement change is to let the public into all those former closed door meetings. Crimea shows how fast a referendum can be put together and while it may not become law at that moment the changes that vote promises can be implemented and later made fully legal, just like is taking place in Crimea (and Iceland)

If Russia was to spend the money it would take to fight a war and use it to fund refugee camps that are broadband sites that would see supplies come from Russia to places like Syria/Lebanon (for starters) Lots of potatoes for moonshine and the container towns are more like a retreat than a hard-ship. The west can build the war machines but there is nobody to fight with them and wall street will be starting to rape the stock-holders in the US so they will be a bit preoccupied.

and the beat goes on ...... the rulebook in play would still be the UN 1947 ones that have war crimes being dealt with and in the 2014 version it is digital media and the world is the potential audience. (once the rest of the citizens get electrical things that are reminiscent of a gypsy caravan with no way to pull the wagons for the moment) Containers filled with Russian goods sent to the 'remote places' and not tied to the grid as they are self contained as far as electricity and sewage (gray water and burnable fiber) (off the shelf items for Canadian rig camps in the wild, Ballard power also makes a fuel cell if solar doesn't cut it in the winter when you need lots of heat, I don't think we will be getting any contracts even though we are the only ones that know how to make an Igloo bear proof) The cleaning up of the embarassing parts is well under way. All the thugs that don't want to get shot get nice uniforms and new weepons, haircuts shaves, respectableized to assume the responsible work of the coup helping the IMF re hahaaha re hah build the country.

Do you think the killing the hired guns so they can't defect will catch on? Even the Syrian rebels have now seen what gunmen in green drive around in. Now they want the same, lol.

Egypt was the first place the bribers took their money back rather than letting them retire in, wait for it,... France. Word about that will get around also so they must have another plan about to happen. Digital money is easier to take back than trying to find real metal.

New country, Haiti was able to pay off their debt in just 250 years, after they won the war against, wait for it, ..... France, again. A valuable piece of property will take how long to pay off? (IMF bank rules in play here)