Blackleaf
#1 May 9th, 2020
Dorset's annual knob-eating competition is to be held online for the first time.

The event - in which contestants vie to gobble more of the county's traditional biscuits than their rivals - usually draws huge crowds... 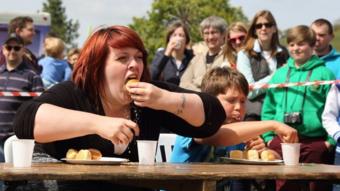 There will be no crowds at this year's knob-eating competition, as contestants will be stuffing their faces online

Dorset's annual knob-eating competition is to be held online for the first time.

The event - in which contestants vie to gobble more of the county's traditional biscuits than their rivals - usually draws huge crowds.

But this year 100 competitive eaters will live-stream their attempts to swallow the savoury spheres.

Its sister event, the Dorset knob-throwing festival, has been postponed until 2021.

Entrants in that competition would normally gather in a field to toss the thrice-baked treats as far as possible.

Each hopeful in the knob-eating championship has been sent a packet of regulation Moores Biscuits for their heats.

Contestants have a minute to finish off as many knobs as they can manage.

But festival chairman Ian Gregory warned the bun-shaped confections were "quite dry" and "you can't eat very many of them" in such a short time.

"But since then no-one has done more than seven," Mr Gregory said.

Organisers said entries had come in from all corners of the UK, including Castle Donington, Ellesmere Port and Cockermouth.

Proceeds from this year's event, which begins at 10:00 BST, will be donated to local charity, Weldmar Hospicecare.

The knob-throwing event started in 2008 and now incorporates a food festival, knob darts and games including knob and spoon racing and pinning the knob on the Cerne Abbas giant.

It is expected to return to Cattistock Fete, in west Dorset, on Sunday 2 May next year. 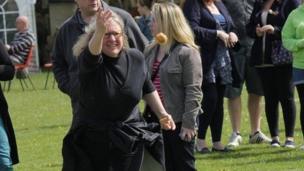 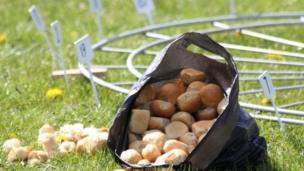 Originally, they were made from leftover bread dough with added butter and sugar, hand-rolled and left to dry in the dying heat of the oven

They can be eaten with Blue Vinny cheese, dipped in tea or cider, or taken with honey and cream - known locally as thunder and lightning