The patient is from Washington County, with no known history of travel to places hit hard by the outbreak, and no contact with a known case of the virus. There have been two other community transmission cases identified in California. This is the first coronavirus case in Oregon. 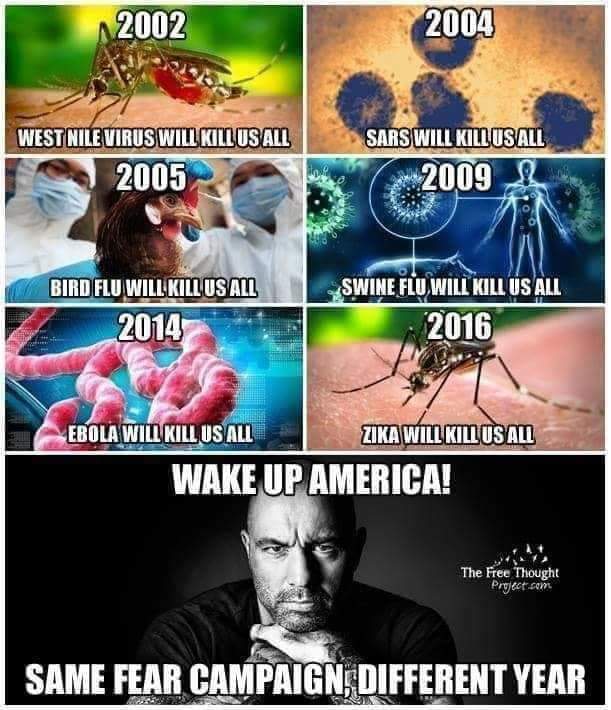 People that are over weight, immune system compromised, or other under lying conditions, heart, liver may not survive the virus. The fact is if you catch the flu they have greater odds of dying.

This isn't dreaded "Disease X" yet, then you can run to the bunker and hide for a couple of years..

Of course we are. THAT is not news.

Vice President Pence said the existing travel ban on Iran would extend to foreign nationals who had been in that country the past 14 days. The State Department also is increasing its warning advising Americans not to travel to parts of Italy and South Korea affected by the virus.

Feb 29th, 2020
We need one thread dude.. why start another?? unless all this shit can be bundled into this mess.

The cat is out of the bag and now the virus will spread through humanity.

Someone died in Washington State.
The cat is out of the bag and now the virus will spread through humanity.

Notify me when you die from it.. I'l be sure to dance a jig on your grave.

Trump the idiot in chief.......talks in superlatives(while blowing his own horn).........but knows nothing about what he is talking about. He is so uniformed .......it is scary. At least Pence is attempting to learn. and seems to be listening to the experts.

��Complete chaos��: Inside Trump��s frantic attempts to minimize the coronavirus crisis
Interviews with nearly two dozen administration officials, former White House aides, public health experts and lawmakers portray a White House scrambling to gain control of a rudderless response defined by bureaucratic infighting, confusion and misinformation.
source: WAPO
Trump the idiot in chief.......talks in superlatives(while blowing his own horn).........but knows nothing about what he is talking about. He is so uniformed .......it is scary. At least Pence is attempting to learn. and seems to be listening to the experts.

So?? are you trying to minimize it too??? (as your hero is trying to do)

This virus has only been identified in the last couple of months.

why not compare the stats in China?? for the duration of this current epidemic.

lmao, we have a big brain here folks

Here are some numpty Bournemouth fans during their game against Chelsea yesterday. Do they go round wearing masks all the time to protect themselves from cold and flu - two illnesses which kill hundreds in Britain alone every year? 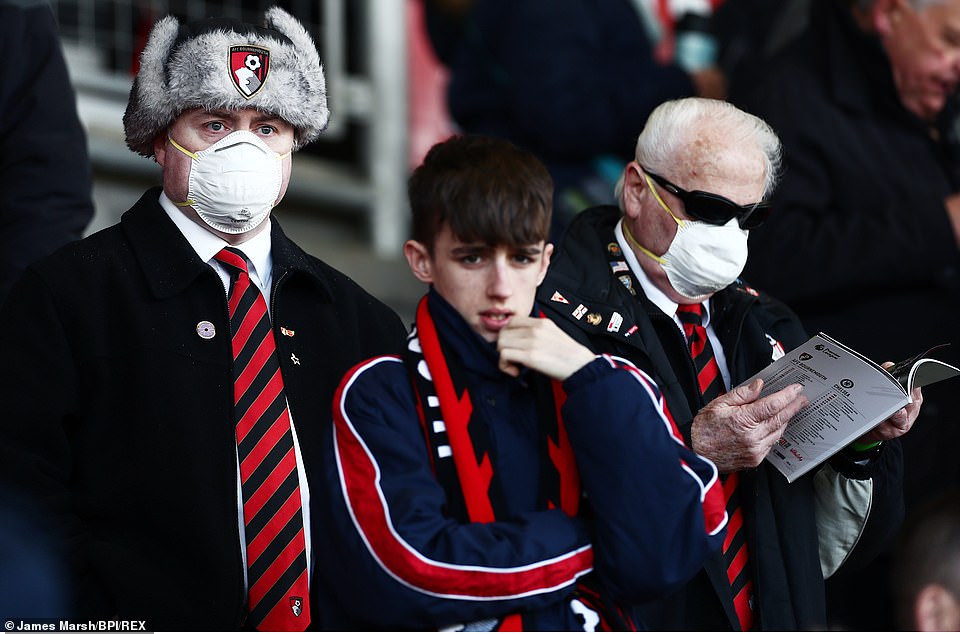 Mar 1st, 2020
The most dangerous thing about coronavirus is the hysteria

If you have just cancelled your trip to Venice and ordered your £19.99 surgical face mask from Amazon, how about this for a terrifying vision: by the time we get to April, 50,000 Britons will have succumbed to a combination of infectious disease and adverse weather.

Frightened? If you are, dont worry: you survived. It was two years ago. In 2017-18 the Office for National Statistics recorded 50,100 excess winter deaths. The explanation, according to the ONS, was probably the predominant strain of flu, the effectiveness of the influenza vaccine, and below average winter temperatures.

Coronavirus (Covid-19) is a pretty virulent virus all right, but not in the way you might imagine. It is less our respiratory tracts it has infected than our inner sense of angst. By last Monday there were 79,331 confirmed cases worldwide, all but 2,069 of which were in China. There have been 2,595 deaths in China and 23 elsewhere in the world. And seasonal flu? According to an estimate by the US-based Center for Disease Control and Prevention, it has caused between 291,000 and 646,000 deaths globally a year. To put it another way, if the number of deaths from coronavirus rises a hundredfold in the next few weeks or months, it will only have reached the lower bound of the estimate for existing strains of flu.

How many of us wear face masks because of winter flu? How many planes and trains are cancelled? Does the stock market slump? There is some justification for being more wary of Covid-19 than the flu. The former is an unknown quantity and we dont yet have a vaccine. But we know more about it by the day. Its death rate is now around 1 per cent or less and it is mostly killing people with pre-existing health conditions; anyone else would be unlucky to die from it.

Coronavirus hysteria occurs because we confuse precaution with risk. We see Chinese cities being cut off, people being quarantined, factories closed, the streets emptying (save for a few people in face masks) and we interpret this as a sign of grave and imminent danger. If China had not taken such dramatic steps to stop the disease, we wouldnt be half as worried.

There seems to be a distinct strain of Sino-phobia in our attitude towards infectious disease. Every novel disease that comes out of China instantly seems to gain the description pandemic  even when diseases such as Sars and H5N1 avian flu hardly justify being called an epidemic. Covid-19 seems to fit neatly with our fears about Huawei spying on our phones and Chinese manufacturers stealing our jobs. Diseases from elsewhere dont excite the imagination nearly so much. There was a brief flurry of concern in 2014 when Ebola, vastly more lethal than Covid-19, emerged in West Africa (it has since killed 11,310 people globally). But if we are going to worry about any infectious disease, it ought to be tuberculosis. The World Health Organization reports there were ten million new cases worldwide in 2018, 1.45 million deaths, and 4,672 cases in England. But no one ever bought a face mask because of that. How many people even know that the epicentre of tuberculosis is India, with 27 per cent of cases globally?

There is something more to the Covid-19 panic. It is the latest phenomenon to fulfil a weird and growing appetite for doom among the populations of developed countries. We are living in the healthiest, most peaceful time in history, yet we cannot seem to accept it. We constantly have to invent bogeymen, from climate alarmism, nuclear war and financial collapse to deadly diseases. Covid-19 has achieved such traction because it has emerged at just the right time. At the end of January, Brexit had just been completed without incident. The standoff between the US and Iran  which preposterously led the Doomsday Clock to be advanced closer to midnight than during the Cuban missile crisis  fizzled into nothing. The Australian bush fires, which caused an explosion in climate doom-mongering (even though the global incidence of wildfires has fallen over the past two decades) had largely gone out. What more was there to worry about?

Then along came a novel strain of disease and the cycle of panic began again. But there are already strong signs that it has peaked. In the seven days before 24 February, the WHO recorded 6,398 new infections in China  down from 13,002 the previous week. On Monday it was 415. Very soon we are going to have to find another thing to agonise about. Asteroids? The next freak weather incident, now the storms have died down? Who knows, but we will certainly find something.

I don't see the big deal in this. It's only a cold.
Here are some numpty Bournemouth fans during their game against Chelsea yesterday. Do they go round wearing masks all the time to protect themselves from cold and flu - two illnesses which kill hundreds in Britain alone every year?

Flu kills many thousands each year in the UK. See page 51 of this report.
https://assets.publishing.service.go...NAL.pdf#page50

Flu kills many thousands each year in the UK. See page 51 of this report.
https://assets.publishing.service.go...NAL.pdf#page50

Yeah. And most are probably elderly. But I doubt those two elderly gentlement usually go round on their daily lives wearing masks to prevent their deaths from something they are much more likely to catch than coronavirus.

So?? are you trying to minimize it too??? (as your hero is trying to do)
This virus has only been identified in the last couple of months.
why not compare the stats in China?? for the duration of this current epidemic.

Because stats from China are not credible.

So?? are you trying to minimize it too??? (as your hero is trying to do)
This virus has only been identified in the last couple of months.
why not compare the stats in China?? for the duration of this current epidemic.

The chances of an infected person dying from coronavirus is 2%, which is about the same as the flu.

That's not true. About 81% of people who are infected with the coronavirus have mild cases of COVID-19, according to a study published Feb. 18 by the Chinese Center for Disease Control and Prevention. About 13.8% report severe illness, meaning they have shortness of breath, or require supplemental oxygen, and about 4.7% are critical, meaning they face respiratory failure, multi-organ failure or septic shock. The data thus far suggests that only around 2.3% of people infected with COVID-19 die from the virus. People who are older or have underlying health conditions seem to be most at risk of having severe disease or complications. While there's no need to panic, people should take steps to prepare and protect themselves and others from the new coronavirus.

Number of people outside China to have died from coronavirus? Just 230, or so. Meanwhile, thousands of Britons will die from the flu this year.

How many of the flu this year?

New York state reported its first case of COVID-19, the disease caused by coronavirus, is a woman currently self-quarantined in Manhattan after contracting the virus during a recent trip to Iran, officials said.

Separately, public health officials in Washington state confirmed a second death from the virus, a man in his 70s.

How many of the flu this year?
https://www.seattletimes.com/seattle...-state-so-far/

Is anyone trying to contain the flu the same way?

This is not something you want to catch, problems breathing, kidneys under pressure you bloate, Hershey Squirt, Evey muscle sore and joint, migraine.

I hear it really sucks.