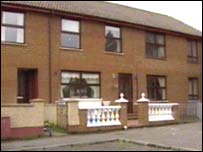 The incident happened at a house in Galliagh

Three teenage girls have been ordered to leave Londonderry by a gang of masked and armed men who broke into a house in the city on Thursday night.

Six men armed with a handgun and a baseball bat entered the house at Galliagh Park at about 2230 BST.

The men put the gun to the head of one of the girls before ordering them all to leave the city within 24 hours.

They then smashed some household goods and the window of a car parked outside before leaving.

Police have condemned those who carried out the attack.

Superintendent David Hanna said: "There's no place for intimidation in this city.

"Those who threaten and abuse children in such a reckless manner have nothing worthwhile to contribute to society and their actions should be utterly condemned."

Detectives investigating the incident have appealed for anyone with information to contact them.

"This must have been a shocking and traumatic experience for the young girls involved and something that no-one should have to go through.

"Those responsible are thuggish cowards," she said.