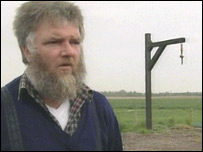 David Lucas said the sale of gallows was not "sick"

A farmer who builds gallows and has sold them to African countries with poor human rights records has been condemned by Amnesty International.

David Lucas, of Mildenhall, Suffolk, said he had been selling execution equipment to countries including Zimbabwe for about 10 years.

Amnesty said the export of gallows, which will be made illegal by an EC regulation in July, was "appalling".

But Mr Lucas said the trade was not sick and "business is business".

He added some people deserved the death penalty.

The execution equipment he says he sells ranges from single gallows, at about £12,000 each, to "Multi-hanging Execution Systems" mounted on lorry trailers, costing about £100,000.

"There have been gaping loopholes in the regulations concerning execution equipment for years and it makes a mockery of the UK's efforts to oppose the death penalty around the world if right under its nose a British company is sending hanging equipment abroad."

An Amnesty International spokesman said the new European Commission Trade Regulation, which comes into force on 31 July 2006, will make it unlawful to export gallows.

A spokeswoman for the Department of Trade and Industry said the government was pleased the export of gallows was being made unlawful.

Says something about the state of technology in Africa.
Have to IMPORT a gallows.
I thought their favoured method of execution was machetes by mob.
I woulda gone over a built a few for a helluva lot less.
Where do Brits get wood for gallows?

May 10th, 2006
there was a led zeppelin song that went
swinging on the gallows pole....