Blackleaf
#1 Sep 23rd, 2018
A magnificent tapestry commissioned by Henry VIII has been rediscovered in Spain, long after it was thought to have been destroyed.

Woven in glistening gold and silver thread, and literally costing a kings ransom, it once adorned the walls of Hampton Court, the Tudor monarchs seat of power.

It was both a lavish show of wealth and a political statement, commissioned around the time of the Act of Supremacy. 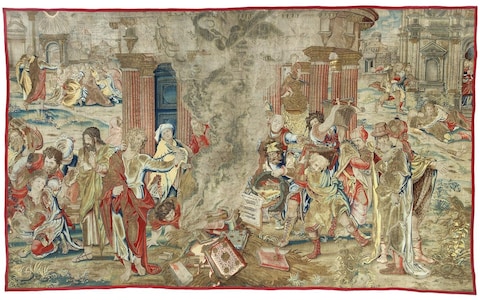 Experts described it as the Holy Grail of Tudor tapestry

A magnificent tapestry commissioned by Henry VIII has been rediscovered in Spain, long after it was thought to have been destroyed.

Woven in glistening gold and silver thread, and literally costing a kings ransom, it once adorned the walls of Hampton Court, the Tudor monarchs seat of power.

It was both a lavish show of wealth and a political statement, commissioned around the time of the Act of Supremacy.

In exquisite detail, its main scene depicts a spectacular bonfire with Saint Paul directing the burning of irreligious books.

It was a stark message from a king who was asserting his religious authority during the destructive phase of the English Reformation, a religious antecedent for his own destruction of the monasteries.

Experts described it as the Holy Grail of Tudor tapestry and one of the most sumptuous and important Renaissance tapestries.

Almost 20 ft wide, it was part of an otherwise lost set of nine tapestries depicting the life of Saint Paul, delivered to the king in the late 1530s and still listed as at Hampton Court at his death in 1547.

In the 1670s, Charles II reused them in his redecoration of Windsor Castle, where they were last recorded in 1770, before they disappeared. 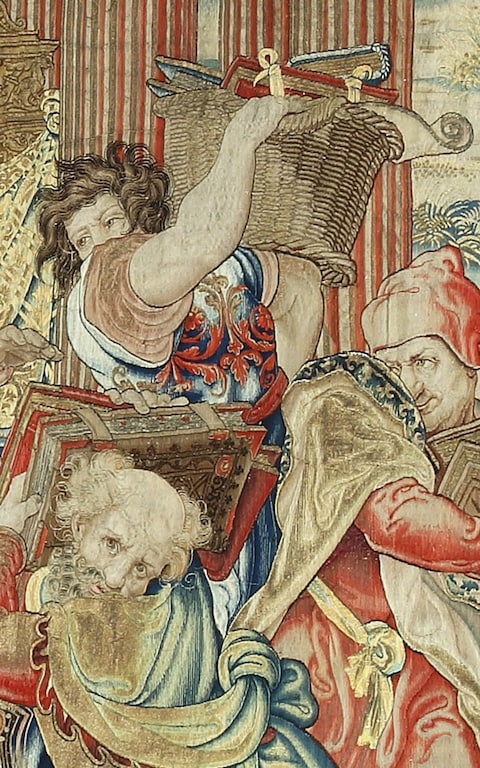 Detective work by leading tapestry experts Simon Franses and Thomas P Campbell has confirmed that this was one of Henry VIIIs commissioned treasures, taken to Spain in the 1960s. Mr Franses described it as the highest achievement of tapestry weaving.

He said that Henry VIII was arguably the greatest single collector of tapestries, originally owning 2,500 examples. But only a tiny percentage have survived, with this one among the supreme masterpieces.

He added: The comparable pieces are at Hampton Court, the Abraham tapestries, which Henry VIII owned. But theyre very polite, tame Biblical tapestries, whereas this is a dynamic, energetic pieceIts absolutely splendid. Theres nothing to touch it in the Victoria & Albert, the Royal Collection or the National Trust.

Research reveals that a Spanish dealer sold the St Paul tapestry to a Barcelona collector in the 1960s. It was eventually sold to an anonymous buyer in Madrid, who has now sent it to Britain to be cleaned and conserved.

It will go on public display for the first time next month [Oct] as the centrepiece of a loan exhibition at S Franses, leading specialists in historic tapestry and textile art, in St Jamess London.

Mr Franses said: The tapestry provided Henry VIII with powerful and unequivocal Biblical authority from one of Christs Apostles for destruction of anything seen as heathen or ungodly. This is the period of the sacking of the monasteries with widespread destruction. Around 1530, there were also specifically a series of proclamations on the destruction of heretical books

Here hes basically saying Ive got religious authority to do this He needs to provide authority for the less palatable things that hes doing.

Dr Campbell, former director of the Metropolitan Museum of Art and an authority on renaissance tapestry, said: This is the Holy Grail of Tudor tapestry.

He had pored over archival documents relating to the lost set in researching his 2007 book Henry VIII and the Art of Majesty. The tapestry was known from a preparatory drawing in Ghent and a fragment of the full cartoon in New York.

When he saw the great work for the first time, he was moved. It was designed for the king by Pieter Coecke van Aelst and woven in Brussels.

Such a tapestry would have taken perhaps eight of the greatest weavers up to 24 months to create.

Dr Campbell said that Van Aelst combined the drama of Raphael with the deep characterisation of Dürer in wonderfully detailed scenes.

He added that, in the 18th and early 19th centuries, paintings started to eclipse tapestries, and many disappeared: We dont know what happened. My fear is that a lot were taken down and entrepreneurial royal servants tried to unravel the gold thread from them. Some got given away

Not only is [this] the only surviving piece of one of the most expensive and iconographically-important tapestry sets in Henrys collection, but the subject has such resonance in the history of the country.

In 2013, its Spanish owner suspected a possible link to Hampton Court and tried in vain to secure an export licence.

Now research has firmly established the link. Franses called on Spain to grant an export licence. He hopes that a UK public collection could then acquire it for considerably less than its value of more than £5m, if it came on the open market.

The loan exhibition, titled Henry VIII: The Unseen Tapestries, will be at the S Franses gallery, 80 Jermyn Street, London, from October 1 to 19.