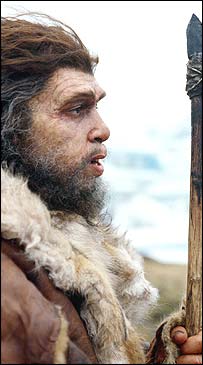 "Good, Lord! We appear to be dinner, Old Chap. Still, never mind, Old Boy. Fancy a quick spot of tiffin before we die?"
The alternative view that man was the one hunted, was suggested

The popular view of our ancient ancestors as hunters who conquered all in their way is incorrect, scientists have told a conference in St Louis, US.

Instead, they say, early humans were on the menu for predatory beasts.

This may have driven humans to evolve increased levels of co-operation, according to their theory.

Despite humankind's considerable capacity for war and violence, we are highly sociable animals, according to anthropologists.

James Rilling at Emory University in Atlanta, US, has been using brain imaging techniques to investigate the biological mechanisms behind co-operation.

He has imaged the brains of people playing a game under experimental conditions that involved choosing between co-operation and non-co-operation.

From the parts of the brain that were activated during the game, he found that mutual co-operation is rewarding.

People also reacted negatively when partners do not co-operate.

Dr Rilling also discovered that his subjects seemed to have enhanced memory for those people that did not reciprocate in the experiment.

By contrast, our closest relatives - chimpanzees - have been shown not to come to the aid of others, even when it posed no cost to themselves.

"Our intelligence, co-operation and many other features we have as modern humans developed from our attempts to out-smart the predator," said Robert Sussman of Washington University in St Louis.

According to the theory espoused by professor Sussman, early humans evolved not as hunters but as prey for animals such as wild dogs, cats, hyenas, eagles and crocodiles.

He points to the example of one ape-like species thought to be ancestral to humans: Australopithecus afarensis

A. afarensis was what is known as an "edge species"; it could live in trees and on the ground and could take advantage of both.

"Primates that are edge species, even today, are basically prey species, not predators," professor Sussman explained.

Dr Agustin Fuentes at the University of Notre Dame agrees with the predation hypothesis.

He believes early humans were subject to several evolutionary pressures, including predation.

But he also thinks they were expending more energy at this time and that child-rearing became more demanding.

All these factors contributed to an emergence of sociable behaviour in hominids that made them harder targets for predators.

The latter group seems to have gone extinct, but could not adapt to these new pressures, going extinct between one and 1.2 million years ago.

The scientists outlined their work at the American Association for the Advancement of Science annual meeting in St Louis, US.