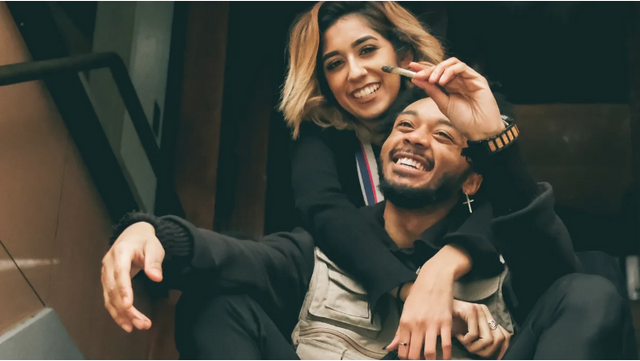 Should you toke up to keep the fire going in your relationship? Science says "yes," with moderation, of course. Indeed, research recently published in the journal Cannabis suggests that some amount of marijuana use by couples can lead to greater feelings of intimacy.

The scientists, hailing from the University of Buffalo and the University of Houston, recruited 183 heterosexual couples from the American Northeast for the 30-day study. To qualify, the participants had to be regular users of marijuana (2+ times a week).

For 30 days, the subjects used a mobile app to note every time they used pot or engaged in any intimate event with their partner. If intimacy had occurred, the event would be reported in the morning as an answer to this question: "At any time yesterday, did you have an interaction or meaningful conversation with your partner that involved intimacy, love, caring, or support?"

Checking the data of intimacy events against marijuana use, the researchers found that it was much more likely for intimacy moments to take place within two hours of using marijuana. This held true if both or even just one of the partners partook of weed.

The frequency of marijuana use during this period was one out of every two days.

Such findings indicate that marijuana use can contribute to strengthening intimacy in a relationship. The authors conclude that two different methods of analysis give "robust support for the positive effects of using marijuana at the same time as or in the presence of one's partner on subsequent experiences of intimacy."

This was true for both men and women. What's interesting is that as opposed to studies on alcohol, which found that both partners had to drink go gain benefits in a relationship, ingesting marijuana can bring the same benefits even if only one partner uses it.

Previous research has also found that marijuana users tend to have up to 20 percent more sex than non-users. Women who smoke pot not only experience an increase in libido but have better orgasms, too.

It should be noted as well that marijuana use, besides still not being fully legal in most of the U.S., may lead to substance abuse, which has been linked to lower relationship success, aggression and divorce.


I think the scientists have been smoking to much wacky tobacco. Just Say'in.