One of Italy's most senior churchmen has been placed under armed guard after threatening graffiti appeared in the northern port city of Genoa. The threats follow a strongly-worded attack Archbishop Angelo Bagnasco made on government plans to give legal rights to unmarried couples.
The first slogan - Shame on you, Bagnasco - was scrawled on the doors of his cathedral a week ago.
A pro-Church paper has dubbed the attacks "spray-paint terrorism".
Over the weekend the words "Death to Bagnasco" appeared elsewhere in the city - accompanied by the Communist hammer and sickle, and the five-pointed star of the far-left Red Brigades terror group.
Police have taken the threats seriously enough to post an officer at the bishop's offices and to increase armed patrols in the area. 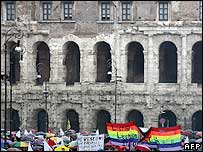 
On Easter Sunday - the holiest day in the Christian calendar - plain-clothes officers mingled with worshippers at Mass in the cathedral.
Monsignor Bagnasco became president of the Italian bishops' conference last month - and as such the chief spokesman for the Vatican's vehement opposition to proposals to give legal rights to unmarried couples in Italy, including gay men and lesbians.
The first graffiti appeared after he evoked the evils of incest and paedophilia as examples of what can go wrong when the Church's moral certainties are ignored.
Church officials immediately stressed that he hadn't meant to draw any link between the rights of unmarried couples and incest or paedophilia - but the damage was done.