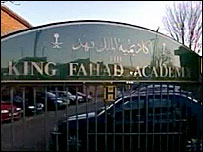 The King Fahad Academy is funded by the Saudi royal family

He wants officials to look into the King Fahad Academy which uses books that brand other faiths as worthless.

An ex-teacher at the London school says parts of the books describe Jews as "repugnant" and Christians as "pigs".

The school denies teaching pupils from these texts, but says the passages will be removed from the books in question.

Mr Knight said: "It would be completely unacceptable for any school to have material which makes the sort of inflammatory assertions that are being alleged.

"I have therefore asked the department to make enquiries in relation to the recent allegations surrounding King Fahad Academy, and to confirm whether the school complies with its statutory requirements on promoting tolerance and harmony."

He said he had noted the school's recent statements and that no judgement was being made at this stage.

He added: "However, it is important that parents and the wider public are assured that all schools provide their pupils with an education that allows them to acquire an appreciation of and respect for their own and other cultures in a way that promotes tolerance and harmony".

But she said the passages would be removed from the books in question "in the public interest".

She admitted the textbooks - translated for BBC Two's Newsnight programme by two independent scholars - were kept at the school.

The translations were "taken out of context" and had "lost some of their meaning", she said.

She said the controversy had arisen from the misinterpretation of the material which was based on the Koran.

"I would like to make it clear that the controversial pages within the books are not taught within the academy," she said.

"However, in view of the public interest I have decided to remove those chapters from the books."

She also said pupils and parents had suffered discrimination and intimidation as a result of the controversy.

Allegations about the Arabic books emerged when a former teacher accused the King Fahad Academy of institutional racism and began a case for unfair dismissal.

He claims he was made to suffer for whistle-blowing allegations of cheating at exams, and that he suffered discrimination as a non-Saudi.

The school denies the allegations and maintains that the teacher was rightly dismissed for misconduct.

An internal appeals procedure set for this week has been postponed indefinitely because of the media storm.

An employment tribunal is set to take place later this year but a date has not yet been arranged.

About 600 children, aged five to 18, attend the King Fahad Academy private school which receives more than £4m from the Saudi royal family each year.

The controversy centres on the use of textbooks produced by the Saudi Ministry of Education.

A textbook dated 2005/2006 allegedly asks the reader to "give examples of worthless religions... such as Judaism, Christianity, idol worship and others".

In another textbook for 12 and 13 year olds, dated 2004/2005, the author allegedly says that a Koranic verse, which talks of turning people into monkeys and pigs, is about Jews and Christians. Ofsted inspected the school last spring and concluded it provided a good Islamic education and knowledge about British institutions and citizenship.