Black Sabbath to call it a day in Birmingham tonight

Blackleaf
#1 Feb 4th, 2017
Black Sabbath are ending their last ever world tour in the city where it all began - their home city of Birmingham. They are playing at the city's Genting Arena tonight.

How did Ozzy Osbourne, Tony Iommi, Geezer Butler and former member Bill Ward's upbringing in post-war, industrial Birmingham influence their unique sound - and is this really "the end" for the band?

Black Sabbath: 'We hated being a heavy metal band' After several world tours spanning five decades, heavy metal pioneers Black Sabbath are bringing it to a close in the city where it all began. How did Ozzy Osbourne, Tony Iommi, Geezer Butler and former member Bill Ward's upbringing in post-war, industrial Birmingham influence their unique sound - and is this really "the end" for the band?

For a group that has been widely credited with creating the sound of heavy metal, influencing thousands of bands and inspiring generations of guitarists, it was a term Black Sabbath initially wanted to have nothing to do with.

"We called it heavy rock," recalls Iommi. "The term heavy metal came about from a journalist when I came back from America (in the 70s).

Who coined the phrase is disputed, with Rolling Stone critics Lester Bangs and Mike Saunders both credited with using it first.

Throughout the 1970s, many reviewers used it as an insult - a sneering description of this new wave of "aggressive" musicians, their loud, thrashing sounds reverberating around packed, sweaty rooms full of fans.

"At first we didn't like being called heavy metal," admits Butler. "But everyone likes to put you into certain pigeon holes, so we sort of got used to it.

"And then instead of it being derogatory, it became a whole lifestyle." 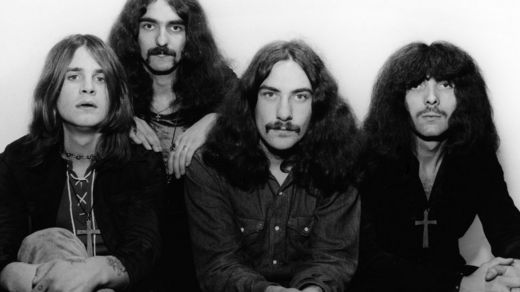 Along with Deep Purple and Led Zeppelin, Black Sabbath were credited with 'inventing' heavy metal

Led Zeppelin and Deep Purple, who, like Black Sabbath, formed in 1968, were also progenitors of the movement.

But Sabbath are credited with inventing the distinctive riffs that characterised the sound in the early days - and that was all down to a terrible twist of fate that befell a 17-year-old Iommi at a steelworks in Aston, Birmingham.

It was the last shift for the young welder at the Summer Lane factory, who was leaving to try and make his fortune as a professional musician.

As he went to cut a piece of metal, the guillotine came crashing down on his right hand, slicing off the tips of his middle and right fingers.

"It was just unbelievable. I sat in the hospital with my hand in this bag and I thought 'that's it - I'm finished'.

"But eventually I thought 'I'm not going to accept that. There must be a way I can play'."

He went home and fashioned new fingertips out of an old Fairy Liquid bottle - "melted it down, got a hot soldering iron and shaped it like a finger" - and cut sections from a leather jacket to cover his new homemade prosthetic. 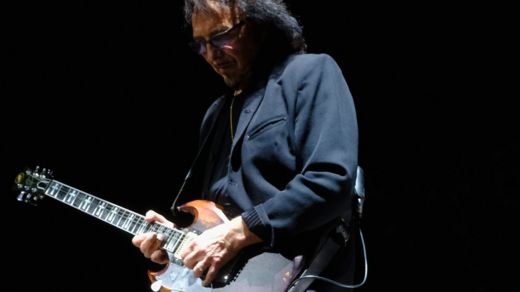 "Tony's an incredible guy," says Osbourne. "He not only played again, he invented a new sound. I often say to him, 'how do you know when you're touching the strings?' - and he says 'I just do it'."

The bleak, factory-laden streets of Aston, where Osbourne, Iommi, Butler and Ward grew up just a few roads apart, also had an impact on Sabbath's haunting sound and ominous lyrics.

The working-class suburb hadn't benefitted from post-war regeneration in the way Birmingham city centre had, just a couple of miles away.

Iommi and Butler worked in factories after leaving school, Ward delivered coal and Osbourne, after stints in a slaughterhouse and car plant, turned his hand to burglary. Music was an escape for the teenagers.

"It wasn't a great place to be at that time," recalls Butler.

"We were listening to songs about San Francisco, the hippies were all love and peace and everything. 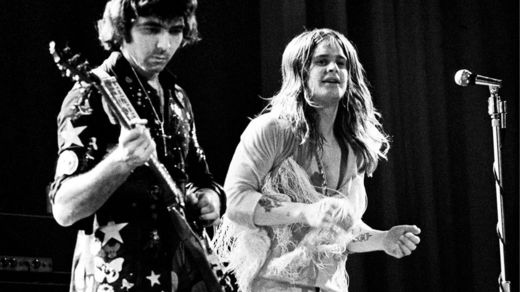 Within two years of forming their band in Aston, Birmingham, in 1968, Black Sabbath were touring America

Britain's war-torn second city "wasn't a great place to be."

"There we were, in Aston, Ozzy was in prison from burgling houses, me and Tony were always in fights with somebody, and Bill, so we had quite a rough upbringing.

"Our music reflected the way we felt."

It was the chance sighting of a small, oddly-written note in a Birmingham music shop - 'Ozzy Zig needs a gig' - that brought the four together.

It was spotted by Iommi and Ward, who were looking for a singer after leaving "a band people could fight to".

"I knew Ozzy from school, Birchfield Road in Perry Barr, and I didn't know he used to sing," remembers Iommi.

"His mum came to the door and we said we were answering the advert, and she said 'John, it's for you'. 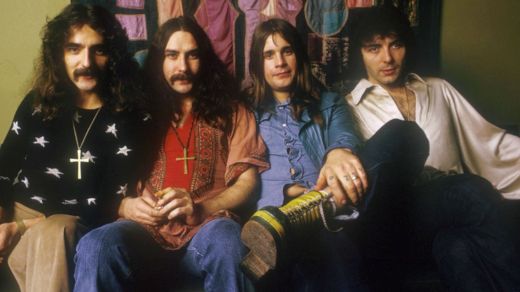 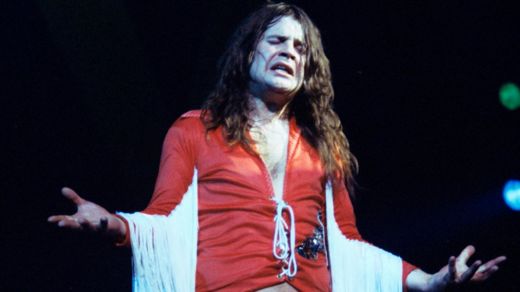 "I saw him walking up the hallway and I said to Bill, 'forget it'. We talked for a bit and then we left.

A few days later, Osbourne and Butler went round to the Iommi family's grocery shop in Aston, saying they were looking for a drummer.

"Bill was with me but he said 'I'm not going to do anything without you'," says Iommi. 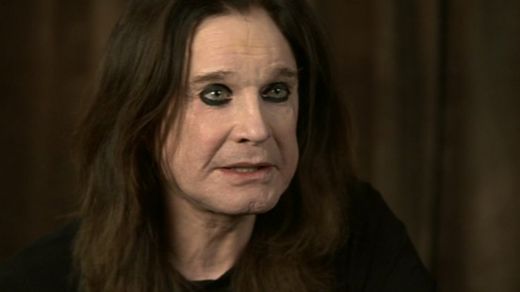 "I have been out of Black Sabbath longer than I've been in," says Ozzy Osbourne 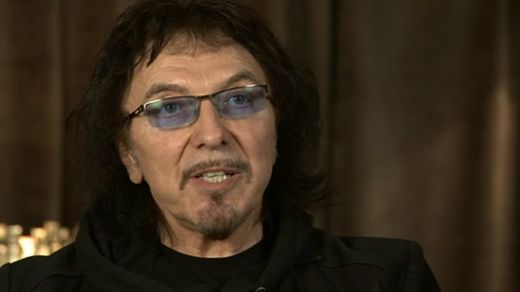 Calling themselves Earth, they started out playing blues, before turning their attention to writing their own material.

Butler recalls: "It was always the hippy, happy stuff on the radio and there were we, in Aston, having to go to work in factories.

"We wanted to put how we thought about the world at the time. We didn't want to write happy pop songs. We gave that industrial feeling to it."

And it was Butler and Iommi's love of horror films that gave the group its signature, stirring sound.

"We wanted to create a vibe like you get off horror films - try and create a tension within the music," says Iommi.

"We thought it would be really good to get this sort of vibe, this fear and excitement. 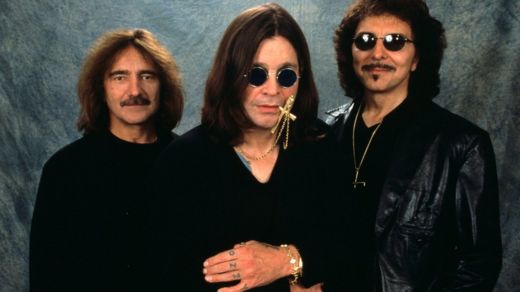 Black Sabbath have had many line-ups over the years, with Tony Iommi the only constant presence, although they are now back to the original lineup, minus Bill Ward 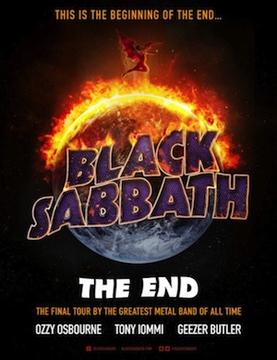 The band's last ever tour ends in Birmingham tonight

Following a mix-up with another band called Earth, the band changed their name to Black Sabbath, after the title track that took its moniker from a 1963 horror film by Boris Karloff.

And within just two years, they were flying to the US to perform to an emerging, global fan base at the start of a career that would span the next 50 years.

Over 70 million records, several line-up changes - Iommi has been the only constant presence - and one headless bat later, the band has decided to call time on touring, performing the last gig on their exhausting 81-date "The End" tour in their home city.

Iommi's much-documented cancer battle and the musicians' advancing years - Osbourne and Iommi are 68 and Butler is 67 - contributed to the decision to slow down.

All three founding members speak with a mixture of pride, excitement and sadness when talking about performing in their beloved Birmingham.

"We've toured everywhere else in the world but there's nowhere like Birmingham," says Butler. 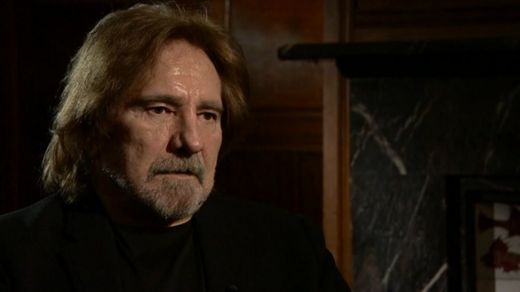 Geezer Butler said the band "came from nothing", growing up on the streets of Aston, Birmingham

"It's still the only place where I get nervous before I go on. It means the world to me. It's where our hearts are."

"It's where we started," adds Osbourne. "The old road has gone back to Birmingham.

But, like many bands before them who have announced "the end" before being enticed back on stage with lucrative deals, should we actually expect to see Sabbath back together again one day?

Iommi's certainly keen. "We're not saying goodbye as such, as in we're never going to do it again, [but] we don't want to do any more world tours," he says.

"I wouldn't rule out doing a one-off show. Or even an album. I think the door's open."

Osbourne, however, is resolute.

"As far as I am concerned, this is the end," he insists.

"I have been out of Black Sabbath longer than I've been in.

We've all had different arguments and fallings out.

"I don't know about them but I'm not doing it again. We want to end on a high note."

Re: Black Sabbath to call it a day in Birmingham tonight

Feb 4th, 2017
They've been around since I was a teenager and I turned sixty, last year. Time to pack up the bats, the Goth stuff, The black and chrome walkers, the black Attends ...

Re: Black Sabbath to call it a day in Birmingham tonight The two-hour gig at the Genting Arena in their home city of Birmingham saw the rock veterans play 15 songs ending with their first hit, Paranoid.

Sabbath's The End Tour began in the US in January last year and took in 81 dates across the world.

'We hated being a heavy metal band'

While Osbourne quit in 1977 to be replaced by Rainbow's Ronnie James Dio, the classic line-up made their way back in 1997.

Ward has not played with the band since 2012 and Osbourne, Iommi and Butler were joined on stage at the final shows by drummer Tommy Clufetos and keyboard player Adam Wakeman.

The final song was streamed live on Sabbath's Facebook page and fireworks went off as the band took their final bow, posing for a farewell photograph in front of the cheering crowd.

"Thank you, goodnight, thank you so much," Osbourne said as they left the stage. Iommi gave a thumbs-up as he waved goodbye. 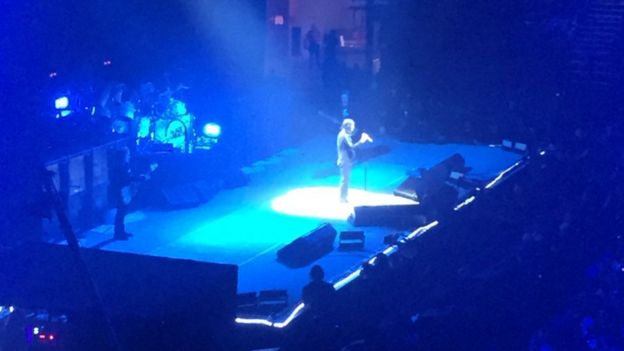 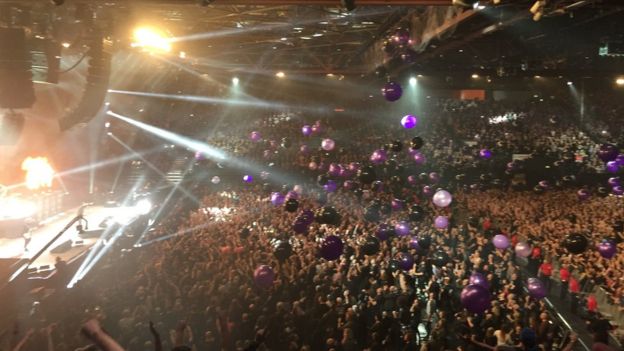 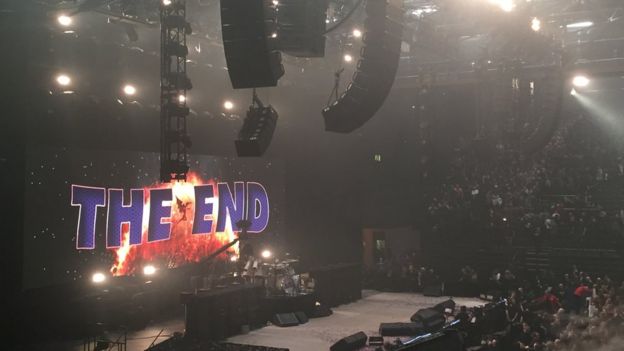 The band has sold over 70 million records worldwide, were ranked by MTV as the "Greatest Metal Band" of all time, and placed second in VH1's "100 Greatest Artists of Hard Rock" list

Speaking to the BBC before the final show, Osbourne said he was "a whirlwind of emotions".

"I remember playing The Crown pub in Birmingham and thinking, 'This'll be good for a couple of years - drink a few beers and have a jam'.

"But it was the beginning of the most incredible adventure you could think of. I've had the best life out of it."

Osbourne said Black Sabbath's farewell tour was the definitive end, vowing: "This is definitely it. It's run its course."

Colin Paterson said the final concert was heavy on nostalgia, with only one of the songs played having been released after 1972.

The audience had come as far away as Australia and Honduras and were emotional, with one telling the BBC: "People behind me were in floods of tears about it. They were absolutely devastated it was the last one."

Another said: "That's the 10th time I've seen them. It feels like I've broke up with a long term girlfriend."

The fans were also having their portraits taken and memories recorded, as part of the Home of Metal project.

The project is asking them to contribute photos and memorabilia for an exhibition celebrating the legacy of Black Sabbath, which will tour internationally in 2018, followed by a summer season in Birmingham and the Black Country in 2019.